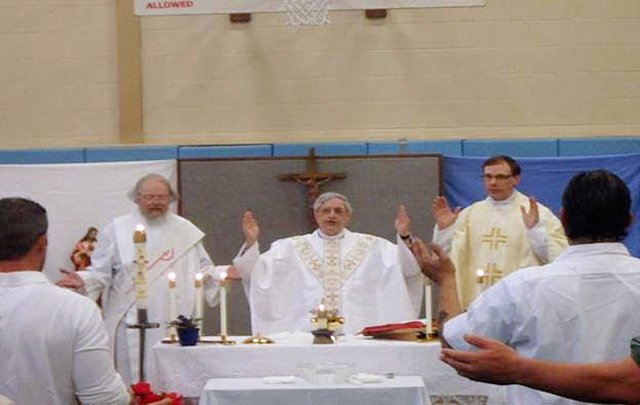 Thanks to the Catholic Family Festival held annually at Groveland Correctional Facility in Livingston County, inmates have the opportunity to embrace their spirituality while in the presence of loved ones.

This year’ event on Aug. 13 featured a Mass celebrated by Bishop Salvatore R. Matano for a congregation of more than 65 people.

In addition to presiding at the liturgy, Bishop Matano conferred the sacraments of initiation — baptism, confirmation and Eucharist — to one inmate and the sacrament of confirmation to two others. Following Mass, the bishop offered the blessing at dinner and spent considerable time visiting and having pictures taken with inmates, according to Deacon Paul Clement, chaplain at the prison.

Deacon Clement noted that the bishop was pressed for time at the most recent Catholic Family Festival and could not stay for dinner — but before leaving "he positioned himself at the head of the buffet line to meet and greet the families and inmates receiving dinner." Deacon Clement also recalled that last year, Bishop Matano served food to the inmates and families and didn’t sit down to eat his own meal until he’d served the other inmates who also had been acting as servers.

"When the bishop comes, it is very special," Deacon Clement remarked, saying that the inmates and their families cherish their photos with Bishop Matano. "The bishop’s personable, welcoming, embracing, friendly demeanor attracts inmates, loved ones and prison staff alike. We are very blessed and we feel the love when he visits."

Deacon Clement added that Bishop Emeritus Matthew H. Clark, as well, has made numerous trips to the Catholic Family Festival at Groveland, a medium-security facility located in central Livingston County.

The festivals have taken place annually for 15 years. All have been organized by Deacon Clement and his wife, Barbara; together they are longtime cochaplains at Groveland. Deacon Clement said the festivals began as an initiative of the state correctional-services system "to prepare inmates for reentry to society by promoting family, corporal and spiritual unity, and health." He noted that the Catholic Family Festival "is the only time during the year that an inmate and his loved ones can come together to worship as they did before the inmate’s incarceration, and have a banquet meal together."

Deacon Clement said that 25 percent to 30 percent of Groveland’s inmate population is Catholic, and overall the prison has 30 legally recognized faith groups out of which 10 congregate for worship.

In addition to their encounters with bishops at the Catholic Family Festival, Catholic inmates are often visited during the year by priests from St. Luke the Evangelist Parish, where Deacon Clement — who has been a permanent deacon for 26 years — serves as parish deacon.

"The Catholics for many years have been blessed to have the local priests join us and preside at Mass. For this, the Catholic inmates are very grateful," Deacon Clement said.