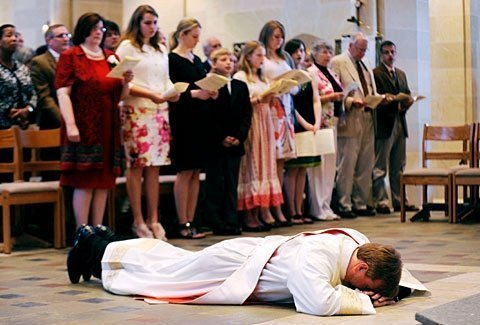 Father Scott Caton prostrates himself in front of the altar during his ordination Mass at Rochester's Sacred Heart Cathedral June 11. For more photos, click here.

ROCHESTER — His sizable family sat nearby as he prostrated himself in front of the altar. His friends from both Catholic and Protestant faith communities filled most of Sacred Heart Cathedral. Across from him were Bishop Matthew H. Clark and dozens of priests who, within minutes, would bestow the laying of hands in welcoming him to their brethren.

Yet even among this sea of humanity, the image of Father Caton lying face-down during the rite of ordination served as a reminder of one supreme relationship: that with his Lord.

Through this unshakable bond, Father Caton fulfilled a quest that was many years in the making. He was ordained by Bishop Clark June 11 in a joyous affair, punctuated by blaring hymns from the Diocesan Festival Choir and two lengthy ovations from the congregation.

“I don’t think I’ve ever felt better,” Father Caton exclaimed to the Catholic Courier as a long line of people began forming in the cathedral narthex to offer congratulations and receive blessings from him.

From the moment Father Caton processed down the aisle holding hands with his wife, Bonnie, it was clear that this priest ordination would have a unique flavor. Later in the Mass, two of the Catons’ six children served as lectors and the other four were gift-bearers.

Father Caton, 50, was granted Vatican permission in 2010 to take final steps toward ordination following 10 years of preparation. He was ordained a transitional deacon a year ago.

“We admire the long journey you have taken,” Bishop Clark said to Father Caton during his homily.

Bishop Clark also praised the family of Father Caton, telling him that they have been “faithful, loving and constant in their support of you over the years.” In addition, the bishop welcomed the “variety of Christian associations” as peers and colleagues from various denominations witnessed the proceedings.

Father Caton entered the Catholic Church in 1998 and began pursuing the priesthood two years later based on his background as a Protestant minister. He then worked with diocesan officials and studied canon law, sacramental theology, moral theology and liturgy over a period of several years following a call that he’s said has existed at some level since childhood.

He served a one-year pastoral internship at St. Joseph Parish in Penfield from 2009-10. This past year he has been a transitional deacon at Rochester’s Blessed Sacrament Parish and assisted at his home parish, Rochester’s Our Lady of Victory/St. Joseph.

As a priest, Father Caton will continue to reside in Spencerport with his family and teach full time at Roberts Wesleyan College. He is a professor of American history and church history there as well as a founding member of Northeastern Seminary, an ecumenical institution. Due to his family and teaching commitments, Father Caton won’t serve in full-time priestly ministry but is looking forward to providing sacramental support as needed.

“We’re going to put him to work pretty quick,” Bishop Clark quipped, adding that an official assignment for Father Caton is forthcoming.

Although obtaining dispensation from celibacy is unusual in the Roman Catholic priesthood, the ordination of former Protestant ministers is possible with Vatican approval; Father Caton said anywhere from 70 to 100 priests in the United States fit his circumstances. However, Bishop Clark noted that he doesn’t expect Father Caton’s ordination to fuel a wave of similar local cases in the near future: “I don’t see this as any great precedent.”

Father Caton and Bishop Clark acknowledged that questions still exist as to how a married man with children can serve as a Roman Catholic priest. Other people, they said, may wonder how and why he left his Protestant roots.

“We all need to adjust to this new way of life, including Scott, and that has already begun,” Bishop Clark said.

For his part, Father Caton said he expects fewer people to raise such issues as he goes forward in his long-awaited priestly ministry.

“If you do your work well, they won’t have very many questions at all,” he remarked.