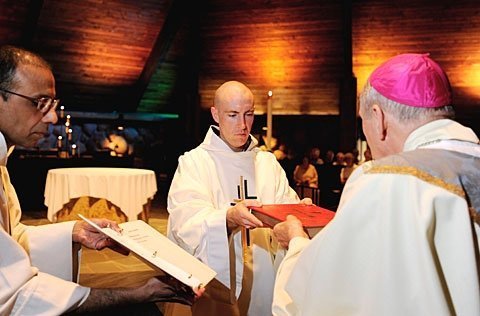 Bishop Matthew H. Clark (right) hands the Book of Gospels to Brother Isaac Slater during Brother Slater's ordination Mass June 10 at the Abbey of the Genesee.

PIFFARD — Brother Isaac Slater entered the Abbey of the Genesee, a monastery for Cistercians of the Strict Observance, in 1999 with no plans for becoming a priest. Yet on June 10, Bishop Matthew H. Clark ordained him a transitional deacon, and he’s now on track to be ordained to the priesthood in August 2012.

"It wasn’t something that I anticipated when I entered the monastery," Brother Slater recently mused.

"There was kind of an aesthetic attraction to the beauty of the life, the climate of mindfulness," he said.

As he learned more about monastic life Brother Slater began to respect and feel called toward Catholicism, and he converted before graduating from Trent University in Ontario with an undergraduate degree in literature.

"I had entered (the Catholic Church) with the vision of becoming a monk," he said.

He worked as a furniture mover for several years before entering the Abbey of the Genesee in 1999 as a postulant. He took his solemn vows in 2005.

Even then, however, he didn’t realize he also was being called to the priesthood. He was content with his life at the monastery, where his life was — and still is –organized around prayer and work. He prays with his brother monks many times a day, cares for elderly monks in the Abbey’s infirmary and took care of a Japanese garden.

"I’ve been extremely happy here for the past 11 years. It’s just the right mix of challenging and relaxing. It’s just the atmosphere in which I thrive," Brother Slater said.

Over time, however, he began discerning a call to do something more, and three years ago he embarked on the path to the priesthood.

"It really grew as an extension of my monastic life, a development of the process that was already going on here," he said.

Brother Slater recently earned his doctoral degree in sacred theology after three years of study at Catholic University of America in Washington, D.C. He’ll return to the school at the start of the new academic year to earn his licentiate in sacred theology, and his priestly ordination is expected to take place next summer.

Brother Slater said he expects the rhythm of his life as a priest at the monastery won’t be vastly different from his current routine. He’ll probably still care for those in the Abbey’s infirmary and he’ll still pray frequently with his brothers, but as a priest, he’ll also be responsible for celebrating the Eucharist and hearing the confessions of his brother priests and guests at the monastery. As Brother Slater has already learned, however, it’s impossible to predict what the future might hold.

Bishop Clark used his homily during the ordination liturgy June 10 to praise Brother Slater’s unwavering faith, even in the face of uncertainty.

"He was not asking to or expecting to be called to the priesthood, and he with generous heart accepts that call," Bishop Clark said. "He responds to God’s call with an open heart and a generous spirit, trusting in God but not knowing all the details that lie before him."

Bishop Clark encouraged those present at the ordination to be mindful of God’s provident care in their own lives. God often asks us to make sacrifices we never imagined we must make, he said, but he also surprises us with many grace-filled moments and gifts.

"I hope that in this moment of grace and the eucharistic table, we would also be open to God’s further call in our own lives," Bishop Clark said. "Remain as open as Isaac has been to God’s call in our lives."