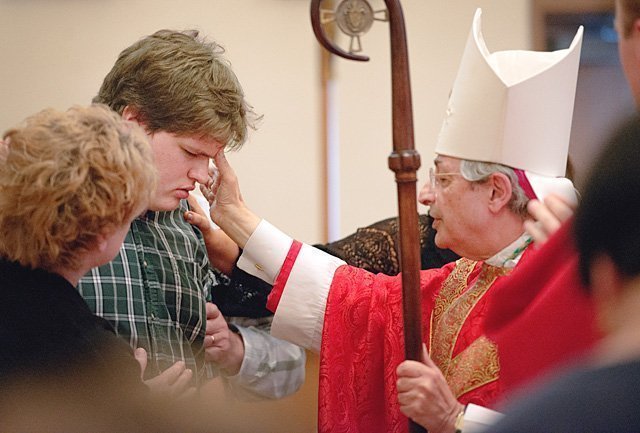 GATES — In mid-July, Dennis Mullen traveled from his home in Tioga County to the Pastoral Center to meet with Bishop Salvatore R. Matano. The first-year bishop wanted to get to know Mullen better, since he’s in formation to become a permanent deacon.

Their conversation eventually turned to Mullen’s autistic son, Sean, who was about to turn 19 years old. Mullen expressed to Bishop Matano his hope for Sean to receive the sacrament of confirmation sometime in the future.

That future came up pretty fast, thanks to a touching gesture by Bishop Matano.

A mere five days after the meeting, Mullen made another 140-mile journey to Rochester — this time with his son in tow as well as his wife, Kathleen, and daughter, Kaitlin.

"We are privileged to witness this bestowing of God’s Holy Spirit," Bishop Matano announced at the beginning of Mass.

Sean, who has the body of a football pro and face of a young boy, spent most of the Mass wiggling and fidgeting — a trait of his autism. He was constantly soothed with hugs, kisses and loving touches from family members; for instance, his mom helped him make the sign of the cross on the forehead, mouth and breast just before the Gospel reading.

Bishop Matano confirmed Sean midway through the liturgy. With their arms draped around him, mom and dad assisted Sean — who has a vocabulary of about 30 spoken words — in making his confirmation. Also close by his side was his sister, who served as his sponsor. Sean took the name Michael as his confirmation name.

"Receive the gift of the Holy Spirit," Bishop Matano told Sean, marking his forehead with sacred chrism. "Peace be with you."

At the end of Mass, Bishop Matano presented Sean with a greeting card and gift as onlookers broke into loud applause.

As far as Kathleen Mullen is concerned, her son — who made his first Communion at age 14 — was highly deserving of the sacrament he received that day.

"If anyone belongs at the table, it’s him — no sin, pure of heart," Kathleen stated. She, her husband and daughter said that despite Sean’s disability, his spirituality is strong.

"He’s very aware of the sanctity of the Mass," Dennis Mullen said. "He is extremely reverent."

Autism-spectrum disorders are characterized by impaired communication and social interaction, as well as unusual, repetitive or severely limited behaviors and interests. According to the United State bishops’ "Guidelines for the Celebration of the Sacraments with Persons with Disabilities," released in 1995, people with disabilities such as Sean’s "are to be encouraged either directly or if necessary, through the parents or guardians, to receive the sacrament of confirmation at the appropriate time."

Based on the initial conversation between Sean’s dad and Bishop Matano, the bishop determined that the appropriate time had arrived.

"The bishop said, ‘There’s no reason he can’t be confirmed,’" Dennis recalled. "He asked if we wouldn’t mind coming up here to do it. I said, ‘You tell us when to be here, and we’ll be here.’"

The Mullens belong to Blessed Trinity/St. Patrick parishes in Tioga County, attending St. James Church in Waverly. Sean is a popular figure there, and is greeted on Sundays by numerous parishioners.

"He’s loved everywhere," said Kaitlin, 21, explaining that others are able to communicate with her brother because he "talks with his eyes."

Sean attended public school in the Waverly district up until this year. He lives at home and is happiest doing family-related activities. Although he requires considerable attention, his family gladly provides it. Dennis Mullen stated that "Kathy’s ministry is Sean," saying his wife gave up her career to raise him: "There’s not a more profound advocate."

As for Kaitlin, a student at John Jay College of Criminal Justice in New York City, she calls Sean "my best friend" and plans to care for him if ever her parents are no longer able.

"Everybody in my life has to know it’s a package deal," she said of her and her brother.

Meanwhile, Sean’s father — a retired New York state trooper who now operates a contracting business — said his son has inspired him "in deepening my faith and answering Christ’s call to the diaconate." Dennis began formation in January 2013 and is projected to be ordained in 2017.

His family praises Sean’s capacity for happiness and love, strongly rejecting the notion that his disability is a burden to them.

"What mother of a 19-year-old boy still gets kisses publicly and has him want to sit in her lap?" Kathleen said. "He’s the embodiment of what unconditional love is."

Visibly choking up, Dennis said his son has inspired the family to become involved in the right-to-life movement.

"He’s just a wonderful example of how all human life is sacred," Dennis remarked.