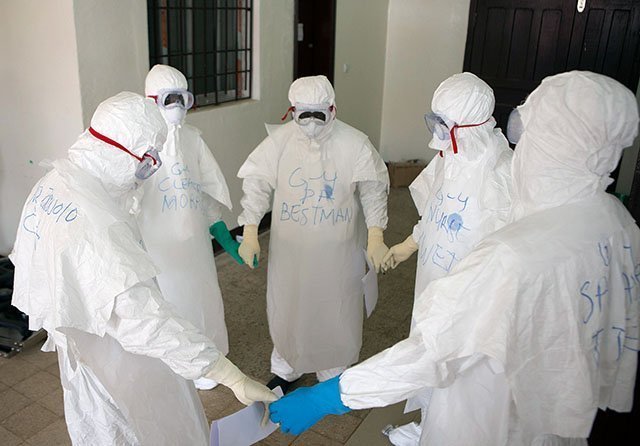 Health workers wearing protective equipment hold hands as they pray at the start of their shift before entering the Ebola treatment center in Monrovia, Liberia, Sept.30.

CAPE TOWN, South Africa (CNS) — A Liberian bishop unable to attend the Synod of Bishops on the family has urged his fellow bishops to use their influence to help West African families in their enormous suffering caused by Ebola.

"It is the poor who have been most harmed" by the Ebola outbreak that, since March, has killed more than 4,500 people, "and it is the poor who are the church’s priority," said Bishop Borwah, who was set to represent the Liberian bishops’ conference at the synod. With restrictions on travel from Ebola-affected countries, Bishop Borwah was unable to get to Rome.

Liberia, Sierra Leone and Guinea are the countries mainly affected by the worst Ebola outbreak on record. Liberia’s official death count tops 2,400, according to the World Health Organization.

"We are losing our humanity in the face of Ebola," Bishop Borwah said, noting that "this disease makes impossible ordinary human kindnesses, such as putting your arm around someone who is crying."

The church in Liberia asks the international church "to pay attention to what is happening here" and the "pain and hurt that the Ebola onslaught is causing families," the bishop said.

Noting Pope Francis’ repeated emphasis on mercy and service to the poor, Bishop Borwah said that "serious effort from church leaders to stand with us in our human misery" would help the people of affected West African countries.

"The influence of the church can cause a lot be done for the sick, who are poor," he said.

"Material help is needed as well as prayers for those who are dying of disease and hunger," he said.

The disease has placed "huge constraints on families," the bishop said, noting that schools have been closed since early August, when a state of emergency was declared.

Markets, where in normal times trading takes place, are largely empty, and many offices have closed, leaving people unable to work, he said.

"To be able to feed one’s family is a very basic human need," and most Liberians are no longer able "even to put one meal on the table every day," he said.

Church leaders around the world could use their influence to lobby political and other leaders, he said, noting that of the countries that pledged money to a trust fund to fight Ebola set up by the United Nations in September, only Colombia has paid, giving $100,000.

As well as being "hungry and angry," Liberians are "fast losing hope," Bishop Borwah said.

Before the Ebola outbreak, the local church was focused on healing the wounds caused by the civil year that ended 10 years ago, leaving Liberia in economic ruin and awash with weapons, he said.

"People are still recovering from many years of war and are very poor. And now, in our new tragic situation, these wounds that were healing have been opened and made more painful," he said.

"During the war, you were still able to bury your dead. With Ebola, you can’t even be with your sick; you can’t say goodbye to your loved ones," he said.

"The pain people are going through now, when they cannot do this, is beyond words," he said, noting that "we are a broken-hearted people."

Because Ebola is spread through direct contact with infected bodily fluids, cultural traditions — including washing the bodies of the dead and greeting people affectionately — have been put on hold.

"Funerals, which have the benefit of bringing families together in mourning, no longer take place. This, also, is tearing families apart," Bishop Borwah said.

Natural affection in all its forms has been halted, he said, noting that in churches around the country, "we wave to each other for the sign of peace."

With Liberia’s national Catholic Ebola response team focusing largely on medical help and prevention programs, the Diocese of Gbarnga is working on food distribution, he said. The price of rice and other basic foods has risen sharply as a result of the Ebola outbreak.

Aware of the need to have a holistic approach, the church in Liberia has tasked its justice and peace commission with monitoring violations of human rights "that are particularly prevalent in times of crisis," Bishop Borwah said.

"There is a lot of anger" among Liberians, mostly aimed at people in positions of leadership and power, as well as "a feeling that God has forsaken us again," he said.

Noting that there is much speculation on the sources of the virus, the bishop said that "serious research into the root causes of Ebola must be done" so that conspiracy theories can be set aside.

"The key to survival is to restore our humanity; our natural human kindness," Bishop Borwah said.

"As a church, we need to look at ways to do this, focusing on long-term solutions," he said.