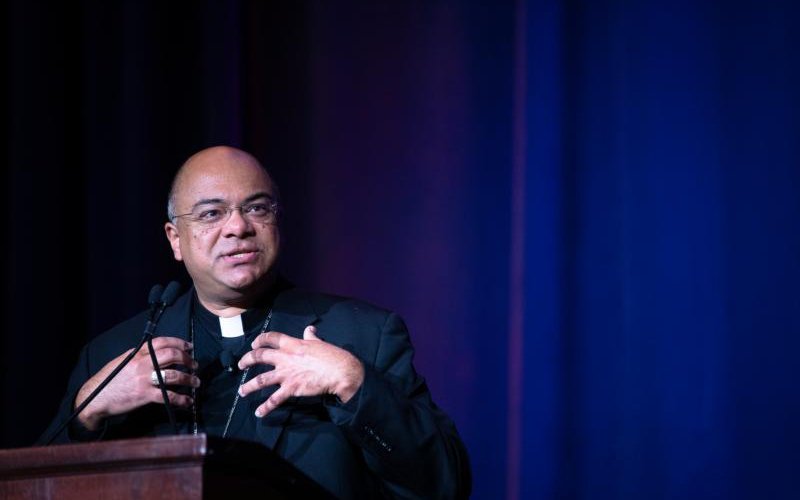 Bishop Shelton J. Fabre of Houma-Thibodaux, La., chair of the U.S. Conference of Catholic Bishops' Ad Hoc Committee Against Racism, gives the opening remarks for a Feb. 3, 2019, panel discussion about racism in the church and society during the Catholic Social Ministry Gathering in Washington. (CNS photo by Tyler Osburn)

WASHINGTON (CNS) — Three mass shooting incidents in the United States in the span of a week are now showing that “their emotional impact is resonating, understandably, across the nation,” said Bishop Shelton J. Fabre of Houma-Thibodaux, Louisiana, chairman of the U.S. bishops’ Ad Hoc Committee Against Racism. “The effects of the evil and sin, we are all impacted by it.”

Bishop Fabre said many people think of racism of being a matter for blacks and whites, “but I think there are many, many faces to racism, so I think it resonates with the pastoral letter,” assembled by his committee and approved by the bishops last year, “when we say that this evil affects everyone, and all communities are affected by racism.”

The deadliest of the three shootings took place Aug. 3 in El Paso, Texas, where accused gunman Patrick Crusius opened fire at a Walmart store in the city, with 22 dead and dozens more wounded. Many of the victims were Hispanic. Crusius had posted a manifesto — some called it a screed — online against an “invasion” of the United States by Hispanics.

Less than 24 hours after the El Paso shooting, a gunman shot nine people dead, including his own sister, at a nightclub in Dayton, Ohio, Aug. 4 before police gunned him down. On July 28, a gunman killed three people at a garlic festival in Gilroy, California, before taking his own life. At least 15 others were injured.

“Many groups are still experiencing prejudice,” Hispanics among them, the pastoral says. “Hispanics have been referred to by countless derogatory names, have encountered negative assumptions made about them because of their ethnicity, have suffered discrimination in applying for college, for housing, and in registering to vote.”

It adds, “Many people of Hispanic heritage come from families that were in this land long before the borders changed.”

The pastoral notes, “Participating in or fostering organizations that are built on racist ideology — for instance, neo-Nazi movements and the Ku Klux Klan — is also sinful; they corrupt individuals and corrode communities. None of these organizations have a place in a just society.”

In addressing racism, “to press forward without fear means ‘to walk humbly with God’ in rebuilding our relationships, healing our communities, and working to shape our policies and institutions toward the good of all, as missionary disciples,” the pastoral says.

“I know people who hunt,” Bishop Fabre said, “but I don’t know anyone who uses an assault weapon.”

Two days before the El Paso shooting, Bishop Fabre and two other U.S. bishops issued a joint statement chiding the “divisive and disrespectful” language of President Donald Trump’s denigration of Baltimore — where Bishop Fabre had conducted a listening session in May on racism in the church — in a series of tweets that others had condemned as racist.

“Social media is used to fire things off without reflection or without conversation. I don’t necessarily like that, and I think most people would say they don’t like that,” Bishop Fabre said in an Aug. 7 telephone interview with Catholic News Service.

“I don’t think Twitter is the best way to fire off things, 134 characters or whatever it is, that deserve substantive ongoing discussions and conversation,” Bishop Fabre said. “I would hate to limit interaction on very important conversations. It has its place, but I am a believer in conversation and dialogue, and that takes time.”

Referring again to the Baltimore listening session — one in an ongoing series of listening sessions that started before the pastoral letter was approved — Bishop Fabre said those who have shared their experiences of racism and listened to those stories are “building bridges” to counteract racism. “We have many, many challenges and many, many struggles, but I don’t think that hope is lifted up enough,” he added.

“I think that healing can continue from the encounter that has begun in the listening session. That is where I see hope myself,” he added. “I have seen it, I have experienced it, and I just know that there are people who are doing wonderful things out there who aren’t getting recognition for what they’ve accomplished.”

“If we have the kind of substantive discussions and encounters that we need to have,” Bishop Fabre said, “headlines that we see today will be a thing of the past.”

– – –
Editor’s Note: The full text of the U.S. bishops’ pastoral on racism can be found online at https://bit.ly/2YUCbjE or on the website of CNS Origins documentary service, https://bit.ly/2yO0L7i.