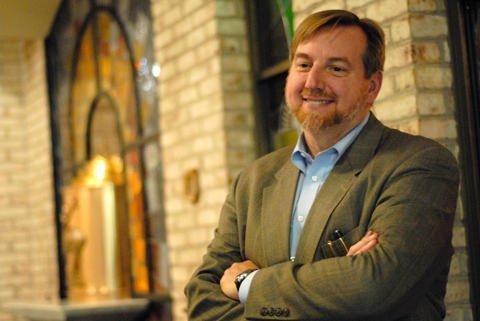 Scott Caton, a former Protestant minister and married father of six, will be ordained a transitional deacon June 5 and is scheduled to be ordained a priest in 2011.

Scott Caton is a professor of history and culture at Roberts Wesleyan College who aims to bring the drama of history alive for his students.

He’s also a former Protestant minister who converted to Catholicism 12 years ago.

Additionally, this married father of six is on track to become Father Scott Caton.

Officials from the Diocese of Rochester announced May 17 that Caton is to be ordained a transitional deacon June 5 at Sacred Heart Cathedral, 296 Flower City Park, Rochester, and is scheduled to be ordained a Catholic priest in 2011.

"We are most excited and pleased at the prospect of having Scott as a priest of our diocese," Bishop Matthew H. Clark said in a statement. "Scott is a man of strong faith and keen intellect, with a wonderful personality. He’s a good man and will be a good priest."

Caton’s request for ordination as a Catholic priest was reviewed and approved by the Vatican’s Congregation for the Doctrine of the Faith and Pope Benedict XVI. The approval reflects a rare exception to the discipline of celibacy that the Catholic Church requires of Latin Rite priests, the diocesan statement said.

Under Vatican guidelines, Protestant ministers who enter the church as Catholics and wish to be ordained must first study in such areas as moral and sacramental theology, the church’s canon law and related areas.

Caton has been preparing for several years for ordination under the guidance of Bishop Clark and other diocesan officials once he expressed his desire to be ordained. He said consecrating the Eucharist and celebrating the sacrament of reconciliation would be awesome responsibilities.

"There are things in my heart that are calling me to do that," he said during an interview May 17 at the diocesan Pastoral Center.

Even after ordination as a transitional deacon and as a priest, Caton said he plans to continue working as a professor of history at Roberts Wesleyan College and a professor of history and culture at Northeastern Seminary, an ecumenical seminary located on the Roberts Wesleyan campus. He is a founding faculty member of the seminary, which was started in 1998. As a transitional deacon, Caton will be assigned to Rochester’s Blessed Sacrament Parish. He said he envisions assisting parishes with the sacraments after ordination as a priest.

In addition to studying theology, canon law and other aspects of the Catholic faith, Caton has been serving as a pastoral intern for the past year at St. Joseph Parish in Penfield. There he has helped visit hospitalized parishioners and has contributed to staff meetings.

In addition to Caton’s academic pedigree, he has brought many other gifts to St. Joseph Parish, said its pastor, Father Jim Schwartz, who is director of seminarians for the diocese.

"He has shown that he has a pastoral heart in terms of helping people in need," Father Schwartz said.

The exception to the discipline of celibacy under which Caton qualifies is extremely rare, but reflects that his call to ministry has not ended, even though he converted to Catholicism, said Doug Mandelaro, diocesan spokesman.

"This is clearly an exception to the rule, but we are grateful and very welcoming that this (exception) permits ordained, married priests in the Roman Rite," Father Schwartz said.

Father Schwartz said the exception is a sign of welcome to those Protestant ministers who have converted and who are still being called by God.

"Those who are celibate, as I am, regard it as a gift, as a charism, but this just shows that there is room in the priesthood for a married person such as Scott," he said.

Caton said he does not see himself as a poster boy for married priests, and noted that his discernment of a call to the priesthood is not meant to be a political statement.

"I’m doing this because I feel God is leading me in this direction," he said.

Caton noted that celibate priests and married Protestant ministers both have to make sacrifices. Those who are single, for instance, may be free to do ministry that would not be possible for those who are married with families.

"In each case I think it demands a different kind of problem that we have to ask for the grace of God to help you with in life," Caton said. "Whatever place the Lord calls you to, he always gives the grace to deal with that."

Before becoming Catholic, most of Caton’s ministerial work was done in Congregational, Reformed and Presbyterian churches although he also served for a short time as a Baptist minister, he said.

Caton said he was heavily influenced in his conversion to Catholicism by famous Catholic converts Venerable John Henry Newman and author G.K. Chesterton. Newman is to be beatified Sept. 19. Caton has taught courses on both men at Roberts Wesleyan, and is one of the founders of the Rochester chapter of the G.K. Chesterton Society.

Caton earned a doctorate in history from the University of Rochester in 1998, a master’s degree in religion from Westminster Theological Seminary in 1988 and a bachelor’s degree from Roberts Wesleyan College in 1986.

Caton, 49, is a Spencerport native and a 1978 graduate of Spencerport High School. He has been married to his wife, Bonnie, for nearly 28 years. He said his wife and their children — five daughters and a son who range in age from 26 to 7 — have been incredibly supportive of his decision.