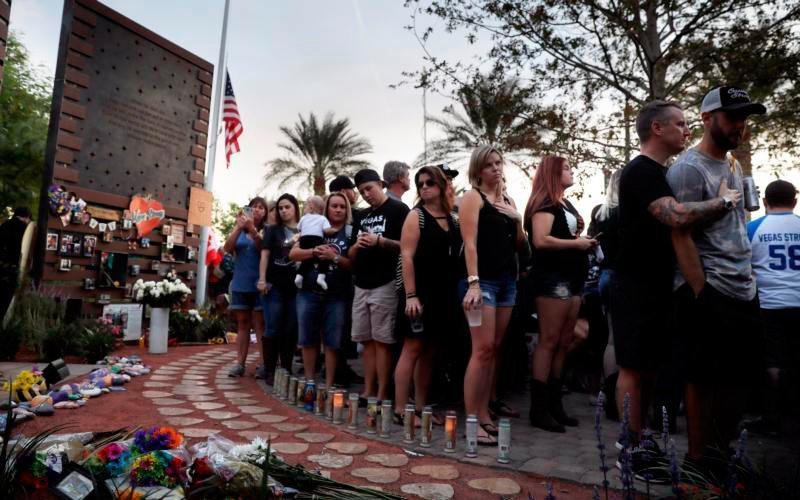 People attend a vigil in a Las Vegas healing garden Oct. 1 during a vigil on the first anniversary of the mass shooting that took place at a music festival on the Las Vegas Strip. The gunman killed at least 58 people and wounded more than 500 before law enforcement entered the shooter's room and killed him. It was the deadliest mass shooting committed by a single person in the U.S. (CNS photo by Isaac Brekken/EPA)

LAS VEGAS (CNS) — This last year “has been a time of unthinkable pain and raw emotion for the Las Vegas community and for families devastated” by the mass shooting of Oct. 1, 2017, Bishop George L. Thomas said at an interfaith prayer service at Guardian Angel Cathedral.

“But it has also been a time when Las Vegas has revealed the best the human family has to offer — the resilience of the human spirit in the face of incalculable odds,” said the bishop, who heads the Diocese of Las Vegas.

He delivered the remarks during the evening service Sept. 30, where he was joined by a dozen leaders of other faiths. Described by many as an emotional gathering, it came on the eve of the first anniversary of the worst shooting in U.S. history, which left 58 people dead and 527 others injured.

From his room on a top floor of a high-rise hotel, the shooter, later identified as 64-year-old Stephen Paddock, rained bullets down on a crowd gathered below for an outdoor country music festival on the Las Vegas Strip.

As a refrain through his remarks, Bishop Thomas used lyrics from a song written in 1971 by Barry and Robin Gibb: “How can you mend a broken heart?” The words, he said, helped “to capture the struggles and challenges we are facing as a Las Vegas community.”

“The questions they asked were plaintive and penetrating. The answers to those questions are resistant to facile responses and pious platitudes,” the bishop said. “‘How can you mend a broken heart?’ they asked. ‘How can you stop the rain from falling down?'”

“Their questions were followed by a call for help that gives voice to our own present-day cry and struggle: ‘Please help me mend my broken heart and let me live again,'” he said.

The question “How can you mend a broken heart?” brings “into focus the images of first responders who risked life and limb to spare human life in the face of danger and unthinkable peril,” Bishop Thomas said. “They were there for us. They embodied uncommon courage and grace under fire. They displayed valor in the face of evil, and demonstrated expertise and training that stands in the ready whenever our community is in need.”

He praised the health care community. With “expertise and acumen,” health care personnel “came together that night with surgical precision,” he said.

Their “human touch, wise counsel and medical competence saved lives,” and they “eased human suffering and soothed grieving hearts just when we needed them the most,” he added.

Next, he told the congregation, “turn your sights to the community at large, a community that lavished love and compassion upon anonymous brothers and sisters, and selflessly gave their time, their tears and their very blood to complete strangers.”

“And in the doing,” the community “redefined the meaning and the power of the Las Vegas community as a human family of care and compassion,” Bishop Thomas said.

Las Vegas spiritual leaders, many of whom attended the prayer service, “were on the pavement, blessing the people with prayer and presence, with consolation and counsel, keeping long hours keeping vigil with the families of the dead and grieving,” Bishop Thomas recalled.

“They embodied servant leadership at its best, and gave depth and meaning to the Scripture passage that ‘there is no greater love than this — to lay down one’s life for a friend,'” he said.

His final words were for the families who lost loved ones and those whose bodies and spirits “were wounded on that fateful night.”

“You have been our teachers in the ways of goodness and grace,” Bishop Thomas said. “You have given new meaning to words like intrepid, resilient and courageous by making room for us in your lives at a time when you were most vulnerable.”

“By your witness,” he said, “you have been clear and definitive. In the Las Vegas community evil and darkness will always be overcome by goodness and light, and unfettered violence will never have the final say.”

So “how can you mend a broken heart?” he asked.

On the evening of Oct. 1, hundreds gathered at the Las Vegas Community Healing Garden for the dedication of a new “Remembrance Wall,” which honors the 58 killed in the shooting.

The new wall, which includes memorial plaques for those who died, replaces a makeshift wall made of wood pallets and put up quickly after the tragedy.

At the end of his rampage, as police closed in on him, Paddock took his own life with one of the guns in the arsenal of weapons he had in his room. The Las Vegas Police Department said his motive for the attack may never be known.

In August, police officials confirmed the department was shutting down its official investigation into the atrocity.