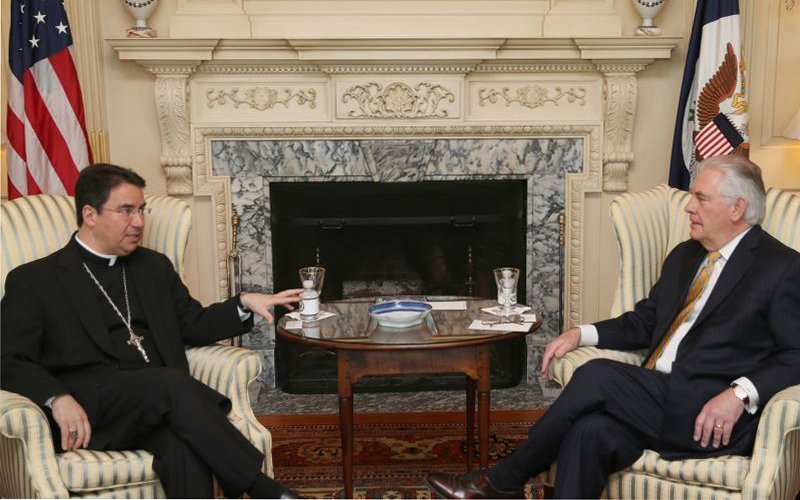 Bishop Oscar Cantu of Las Cruces, N.M., gestures during a March 23 meeting with U.S. Secretary of State Rex Tillerson at the State Department in Washington.

WASHINGTON (CNS) — If the United States abandons a multinational agreement that limits the ability of Iran to develop nuclear weapons, the incentive for North Korea to negotiate about its nuclear weapons program would be weakened, said the chairman of the U.S. bishops’ Committee on International Justice and Peace.

Bishop Oscar Cantu of Las Cruces, New Mexico, said in a letter Oct. 3 to Secretary of State Rex Tillerson that the so-called P5+1 agreement with Iran is crucial if negotiations with North Korean officials have any chance of occurring.

“The agreement with Iran is critical for progress in nuclear nonproliferation and has implications for the deeply troubling prospect of a nuclear-armed North Korea,” Bishop Cantu wrote.

“The threat of violence from the North Korean regime cannot be ignored, but the prospect of catastrophic death and destruction from military action must prompt the United States to work with others in the international community for a diplomatic solution based on dialogue,” the letter said.

The U.S. recertified Iran’s compliance under the 2015 agreement while acknowledging other concerns about Iran’s actions in the Middle East. The next recertification is due Oct. 15.

The P5+1 agreement includes the U.N. Security Council’s five permanent members — China, France, Russia, the United Kingdom and the U.S. — plus Germany. The countries joined together in 2006 in diplomatic efforts with Iran regarding its nuclear program.

The U.S. “must lead by example” in working other nations to achieve the nonproliferation of nuclear weapons,” Bishop Cantu added. “U.S. diplomatic leadership is crucial to promoting a peaceful resolution of concerns regarding nuclear proliferation,” he said.

The letter also reminded Tillerson that the Catholic Bishops’ Conference of Korea has pledged to “raise (their) voices for the peaceful co-existence of two Koreas.” He noted that the Korean bishops’ conference president has met with Pope Francis, who offered support for the peace efforts of South Korea President Moon Jae-in in seeking dialogue and compromise to resolve conflicts between the two countries.

Editor’s Note: The full letter can be read online at http://bit.ly/2hLA0Li.