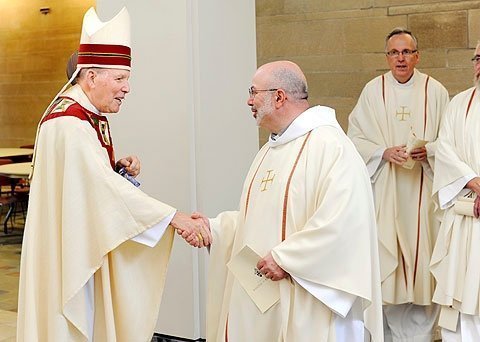 The Twelve Apostles were constituted by Christ in the form of a college or permanent assembly, the Second Vatican Council decreed, and as a college the bishops are their successors.

Thus, the practice of collegiality is living in a way that recognizes this ancient college, explained Father Joseph Hart, moderator of the diocesan Pastoral Center and one of two diocesan vicars general.

The church is led not by the pope alone but the pope with the body of bishops, he said. And this understanding of the bishops as a college began to be used in analogy with the priests of the diocese, noted Father Hart.

"It’s not a bishop leading the priests but together discovering how the Holy Spirit is leading the church," Father Hart added.

Bishop Matthew H. Clark has followed this model of a bishop working in community with his priests since the beginning of his leadership of the Rochester Diocese, Father Hart and other diocesan priests observed.

Bishop Clark’s own writing echoes this principle. In his August 1997 essay on "The Pastoral Exercise of Authority" published in the New Theology Review , he wrote: "Vatican II tells us that priests are ‘dependent on the bishops in the exercise of their power’ (LG 28) and yet they are co-workers with him who ‘participate in and exercise with the bishop the one priesthood of Christ.’ (CD 28). The overlapping of authorities once again is solved on the one hand by subsidiarity (where the bishop interferes in the daily ministry only when absolutely necessary for the greater good) and on the other hand by hierarchical communion (where the bishop is joined to his priests who in turn are joined to each other ‘by a bond of charity, prayer and every kind of cooperation.’ [PO 8])."

The Diocese of Rochester has been blessed to have a leader who has truly lived the spirit of collegiality, said Father Louis Vasile, pastor of St. Alphonsus Church in Auburn, who served as Bishop Clark’s secretary from 1982-86. He also ministered under Bishop Clark’s predecessor, Bishop Joseph L. Hogan.

"Having sat with him in Priest Council, he treated priests as brothers," Father Vasile said of Bishop Clark. "In 33 years, he never veered from that course of action."

Father James Schwartz, pastor of St. Joseph Church in Penfield, agreed that the bishop’s support of his priests has been consistent.

"When priests are in need for whatever reason, the bishop is always available," he said. "He’s a good listener, has a compassionate heart and really feels comfortable mingling with priests."

The bishop’s thoughtful approach was evident during the painful process of closing of parishes, he added. Bishop Clark truly listened to priests and parishioners, setting a model not employed in other cities, he noted.

"While the planning process could have been done differently, as it was done in other dioceses, the Diocese of Rochester chose cooperation and collegiality rather than forcing people to do things, resulting in catastrophic consequences such as closing churches by fiat instead of listening to the people and letting them make a choice," remarked Father Vasile.

A contemplative approach has been a key component of Bishop Clark’s ministry, Father Schwartz noted.

"He hasn’t really, thanks be to God, let the power of being bishop get to him, where it becomes an elite status," he added. "He really has shown a desire to grow … in his own prayer life, as he is a deeply spiritual person, and in his (efforts) to listen and always dialogue with people. He has a listening heart."

Father Hart noted that another example of Bishop Clark’s willingness to truly listen occurred in the mid-1980s. At that time, the bishop had suggested organizing a diocesan synod, but the priests said the time was not right and Bishop Clark backed off, Father Hart added. A few years later, the priests came back to Bishop Clark to say the time was then right, and plans for the synod, which took place in 1993, moved forward.

"By his kindness, by his patience, by his charity, (Bishop Clark) was letting priests know by word and example that he really did want to work with them as a college," noted Father Hart, who directed the synod.

Because of the bishop’s strong adherence to the principle of collegiality, Father Schwartz said he has felt empowered in the ministries he has overseen. Most recent among those ministries has been a decade of service as the diocesan director of seminarians, a responsibility he recently handed off to the newly appointed director, Father Paul Tomasso.

"I really feel that it’s the bishop’s inspiration that has led to that (feeling)," he said. "He’s a very relational person. He connects with people."

Appointed director of priest ministry in 1979, Father Schwartz said he worked closely with Bishop Clark from the beginning of his tenure as bishop.

"That office (priest ministry) did not exist before and was a new direction the diocese took when Bishop Clark became bishop," he said. "He wanted to make sure that priests, in their desire to lead others in prayer, that they, too, were prayerful people."

"I enjoy going to the annual convocation no matter what the topic is, mingling with the priests, parish administrators and the bishop," he remarked. "It’s a wonderful example of (his) collaboration with priests. And is really just a relaxed, prayerful and collaborative kind of way that the bishop (interacts)."

Ideally, a local bishop should stand as the church’s symbol for the fundamental principles of subsidiarity and collegiality, Bishop Clark wrote in "The Pastoral Exercise of Authority."

"The diocesan bishop must create in his local church an ecclesial environment which not only allows but encourages an openness to the discussion of questions alive in the church, even when such discussions touch on sensitive issues," he wrote. "And he must invite the Great Church to do the same."

Priests have experienced that spirit of openness with Bishop Clark, remarked Father Hart.

"You can find it in the way he listens to priests at the priests’ convocation," he said. "He isn’t going through the motions. He really wants them to help him oversee the local church."

"By every stretch of the imagination, he follows the Gospel," Father Vasile added.