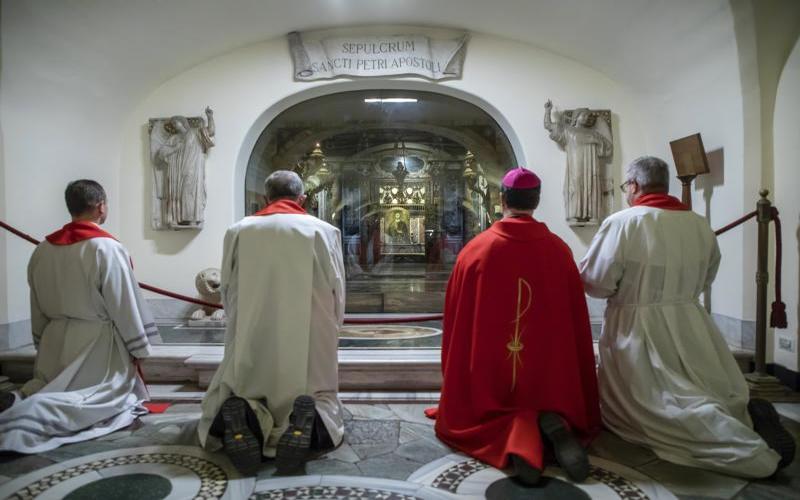 Bishops from California, Hawaii and Nevada pray at the tomb of St. Peter after concelebrating Mass in the crypt of St. Peter's Basilica during their "ad limina" visits to the Vatican Jan. 27, 2020. (CNS photo by Stefano Dal Pozzolo)

VATICAN CITY (CNS) — The bishops of California, Nevada and Hawaii brought their prayers and the prayers of their people to the tomb of St. Peter, asking God to strengthen and renew them in their faith.

Archbishop Jose H. Gomez of Los Angeles led the bishops in prayer as the principal celebrant and homilist at Mass Jan. 27 in the grotto of St. Peter’s Basilica.

The Mass was the first formal appointment of the bishops’ visit “ad limina apostolorum” — to the threshold of the apostles. Their Mass in St. Peter’s preceded their meeting with Pope Francis and marked the beginning of a week of prayer in the major basilicas of Rome and meetings with Vatican officials to discuss the status of their dioceses.

“The tomb reminds us that the apostles were ordinary men just as we are,” Archbishop Gomez said. “As men, they had the privilege to know Jesus Christ and to be called personally by him — just in the same way we have been called to follow Jesus Christ, and we thank God for that grace today.”

The identity of bishops and priests is “very simple,” the archbishop said. “We are called to be with Jesus, and we are sent out to preach.”

“We come here, to Peter, to be strengthened, to be supported, to renew our identity as apostles — as bishops and priests. Let us ask for that,” the archbishop told his brother bishops.

At the Mass, the bishops listened to a reading from the First Letter of Peter: “Tend the flock of God in your midst, (overseeing) not by constraint but willingly, as God would have it, not for shameful profit but eagerly. Do not lord it over those assigned to you, but be examples to the flock.”

“As we know, to lead by example is not always easy,” the archbishop said. “Let’s ask for that grace, too.”

In the Gospel passage that bishops read on their “ad limina” visits, Jesus asks St. Peter, “Who do you say that I am?”

“Jesus is asking us the same question,” Archbishop Gomez said. “Who do we say that Jesus is?”

Suggesting another prayer for the bishops, the archbishop said they should “ask for the grace to really understand that our vocation is to be close to Jesus, to follow him and to allow him to tell us where we are supposed to go.”

“We need to cling to him. Our strength comes from our union with him,” he said.

“As challenging as it is to be a bishop,” he said, “we can do it because God is with us.”