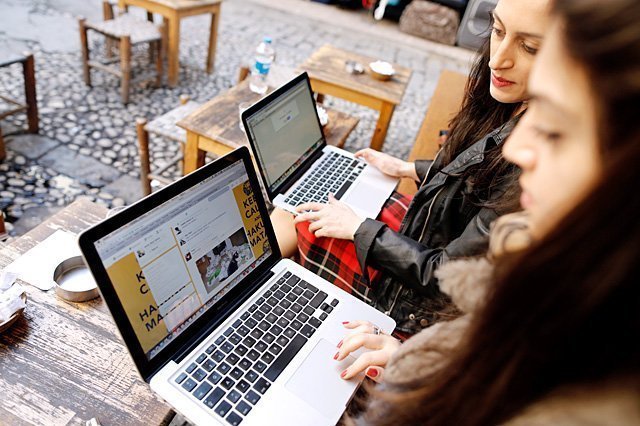 Turkish women try to connect to Twitter at a cafe in Istanbul, Turkey, March 21. In the United States, the Federal Communications Commission voted Feb. 26 to preserve an "open Internet" and safeguard net neutrality.

WASHINGTON (CNS) — The Federal Communications Commission’s vote Feb. 26 to preserve an "open Internet" and safeguard net neutrality was welcomed in many quarters of the country, including by the chairman of U.S. bishops’ Committee on Communications.

"From the inception of the Internet until the mid-2000s, Internet service providers were not permitted to discriminate or tamper with what was said over those Internet connections," he added. "Today, the FCC restores this protection for speakers, protection particularly important to noncommercial religious speakers."

The issue had heated up significantly over the past four months, after President Barack Obama in November called on the FCC to preserve an open Internet.

Groups of all types and stripes bombarded the FCC with email messages and phone calls beseeching the agency to act decisively to prevent preferential treatment for some content providers and to keep the Internet from splitting off into "fast lanes" for those willing to pay.

Among the groups advocating for net neutrality was an interfaith group, Faithful Internet. Helen Osman, secretary of communications for the U.S. bishops, recorded her own plea for an open Internet from a Vatican rooftop.

"Pope Francis’ inspirational message of hope has inspired millions of people, Catholics and others," Osman said in the message. "This would not have been possible without an open Internet, in which faith content is provided alongside commercial content in an equal fashion. Let’s keep the Internet open and free for the common good."

The U.S. bishops have long supported the concept of an open Internet, which would keep Internet service providers such as Verizon, Comcast, AT&T or Time Warner Cable from tampering with access by consumers to any legal website or other Web content.

The FCC split along party lines in its vote, the three Democrats voting in favor of the new rules and the two Republicans voting against them. All five commissioners are expected to testify March 18 at a Senate hearing on net neutrality.

Senate Republicans have considered passing a bill overriding the FCC’s new rules, which it has the authority to do. But GOP lawmakers have likewise been besieged by messages from Americans seeking the preservation of an open Internet.

Problems first cropped up in the mid-2000s as some Internet service providers were caught blocking certain kinds of Internet traffic. Even under the principle of net neutrality, illegal content may be blocked such as pornography or the file-sharing of copyrighted material, but when uncopyrighted material was found to have been blocked, the FCC took action in 2010. Those rules, though, were thrown out in court.

Five years ago, the FCC had branded the Internet as an information service. With the new rules, the FCC has determined the Internet to be a telecommunications service, using rules first issued in 1934 to regulate utilities to justify its position.

Verizon issued a statement Feb. 26, using a font resembling the keys on a manual typewriter to mock the FCC’s decision, even dating the press release Feb. 26, 1934. Verizon senior vice president of public policy and government affairs Michael Glover said the FCC’s use of "badly antiquated regulations" was "a radical step that presages a time of uncertainty for consumers, innovators and investors."

However, many groups lauded the FCC’s vote. Among them were the media policy group Free Press, the Progressive Change Campaign Committee, and Public Knowledge.

Opponents include the National Cable & Telecommunications Association, now headed by Michael Powell, a former FCC chair. The organization may file suit to block the rules.

By the same token, cities like Chattanooga, Tennessee, and Wilson, North Carolina, may seek judicial redress to expand their existing municipal broadband networks to nearby cities. Currently, 19 states including Tennessee and North Carolina have since passed laws forbidding cities from building their own broadband networks. Those laws may be at risk after the FCC’s actions.