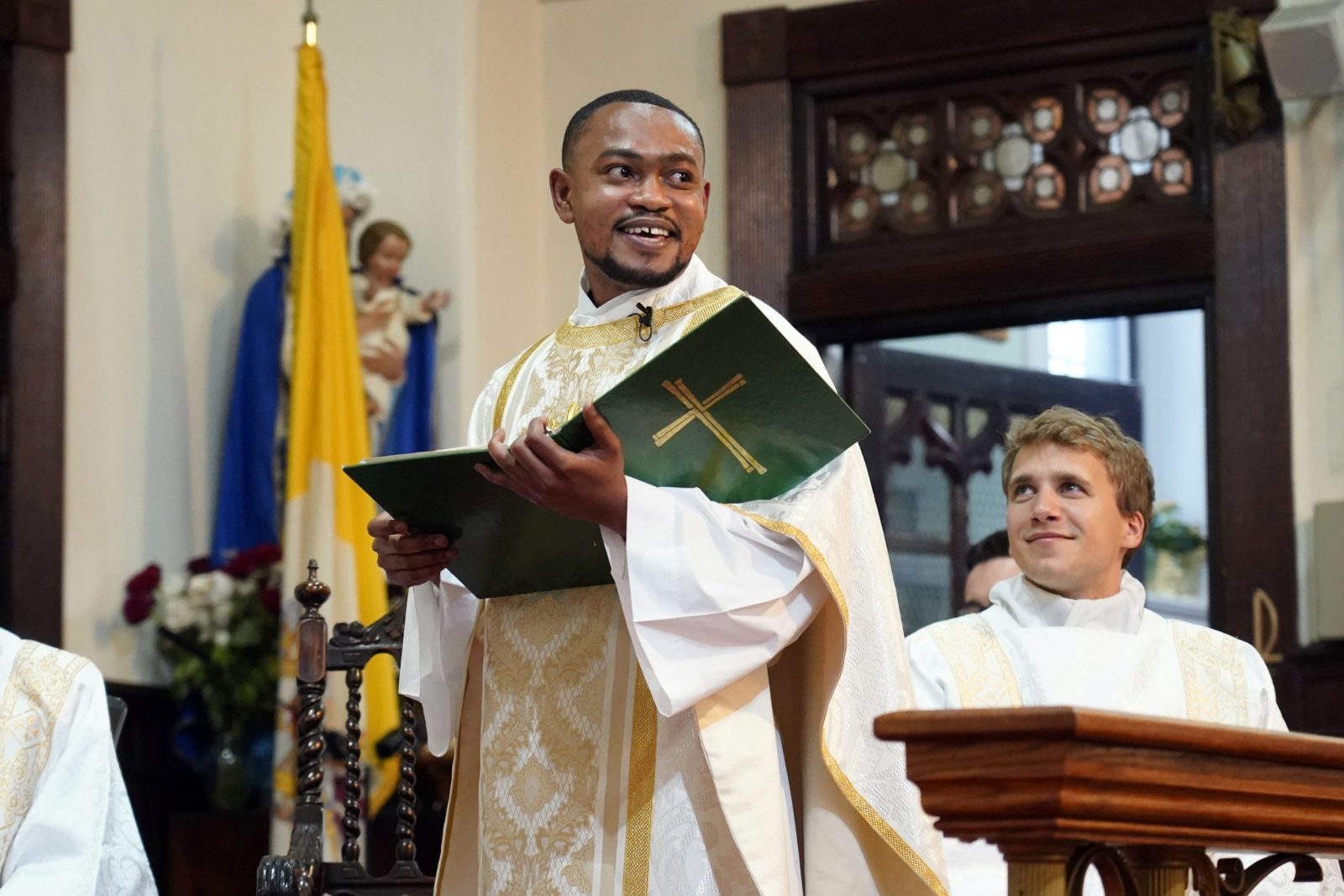 Father Wesbee Victor smiles as he celebrates his first Mass as a priest May 29, 2021, at St. Catherine of Genoa Church in New York City. Born in Port-au-Prince, Haiti, Father Victor, 31, was one of 10 men ordained to the priesthood by New York Cardinal Timothy M. Dolan at St. Patrick's Cathedral earlier in the day. (CNS photo by Gregory A. Shemitz)

U.S. bishops will gather virtually for their June 16-18 spring assembly

WASHINGTON (CNS) — A decadelong series of retranslating and approving liturgical texts is nearing its end, but isn’t quite there yet.

During the first day of their June 16-18 virtual spring assembly, the U.S. Latin-rite bishops were asked to approve three additional sets of texts from the International Committee on English in the Liturgy, or ICEL.

These sets are on Blessed Virgin Mary, Mother of the Church; additional intercessions and psalter concluding prayers for the Liturgy of the Hours; and the Order of Penance.

The votes on each set require two-thirds approval of the Latin-rite bishops. Following such approval, the Vatican Congregation for Divine Worship and the Discipline of the Sacraments needs to issue a “confirmatio” before the translations can be used.

“We continue to make steady progress,” said Archbishop Leonard P. Blair of Hartford, Connecticut, chairman of the bishops’ Committee on Divine Worship. “We’re hopeful we might have a completed new edition printed and ready for you by 2025.”

The process began inside the United States at the bishops’ fall 2012 meeting, when they approved a “scope of work” for the Liturgy of the Hours. While some texts would remain untouched, others would be completely retranslated and some others would receive minor adjustments. Texts for Advent, Christmas, Lent and Easter have already been approved by the bishops.

With the Order of Penance, “the new text does not represent a drastic change with respect to the current translation, although the new texts are more precise than the older material,” Archbishop Blair said.

Yet to be done are the texts of the Ordinary — rubrics — found in each volume of the Liturgy of the Hours, and a collection of errata pertaining to sections of the breviary not included in the original scope of work.

Those items are expected to be included in what is believed to be the final set of translations, with an anticipated completion date by ICEL before the end of this year.

This new set of texts had previously been introduced to the U.S. bishops in “green book” form beforehand by ICEL, a mixed-commission that represents 11 English-speaking countries with 800 bishops, according to Msgr. Andrew Wadsworth, ICEL executive director.

After bishops suggest revisions, ICEL translators get back to work and present the finished product as a “gray book.” Responding to emailed questions from Catholic News Service, Msgr. Wadsworth said the colors represent the cover of each edition of the translations submitted to the bishops.

He added the bishops may accept the translations as is, or vote on making specific changes before approving the full set. The Marian set, at 25 pages, is the shortest. The Liturgy of the Hours translations come in at 134 pages, and the Order of Penance at 217 pages. All are split evenly between the original Latin texts and the ICEL translations.

Msgr. Wadsworth said the work is typically done by a single translator who has the approval of the Vatican. “Our translators are all over the world,” he added, and shift between working remotely and having in-person meetings. During the coronavirus pandemic, however, “like everyone, we’ve used Zoom and Teams as a digital platform for our translation work,” he said.

In response to a question, Father Andrew Menke, executive director of the bishops’ Secretariat on Divine Worship, said publishers “have quite a bit of freedom” in publishing excerpts from the larger books. A prayer card version of an examination of conscience from the Order of Penance, he added, could easily be done.

The last time Order of Penance text translations were approved by the bishops was in 1975, Archbishop Blair said. In response to another question, Father Menke alluded to a slight change in the formulation of absolution, but “the actual, essential part of the sacramental formula hasn’t changed, however. A couple of the words have changed leading up to that. It might be frustrating for some priest trying to memorize that,’ but there is “no issue” if they “use the old version out of habit.”