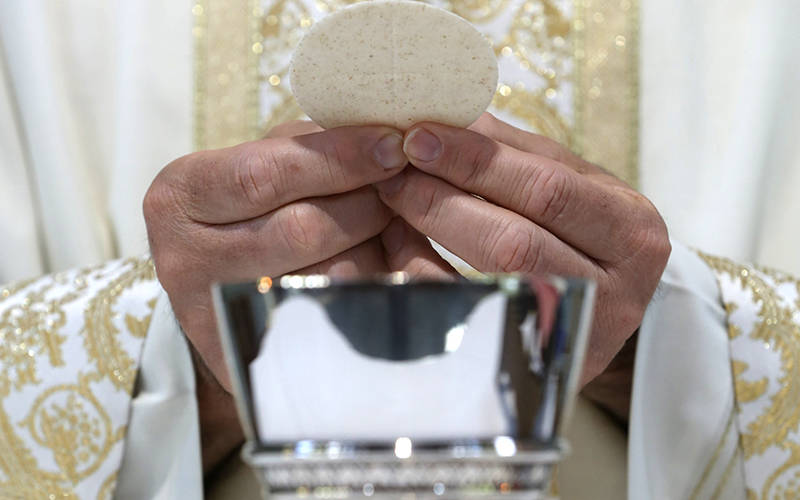 A priest holds the Eucharist in this illustration. (CNS photo by Bob Roller)

U.S. bishops will gather virtually for their June 16-18 spring assembly

Moments after the U.S. Conference of Catholic Bishops opened their spring general assembly June 16, a debate on whether to allow unlimited discussion on a proposal to draft a document to examine the “meaning of the Eucharist in the life of the church,” showcased how divided the U.S. bishops are on the topic.

The debate on the first day of the virtual assembly focused on amending the meeting’s agenda to add time to the next day’s debate so as many bishops’ voices could be heard over the “action item” on drafting the document.

Archbishop Mitchell T. Rozanski of St. Louis wanted to ensure that the bishops would not be limited by time on a proposal from the bishops’ Committee on Doctrine for a teaching document on the Eucharist and moved that the agenda be amended to allow all bishops who wanted to speak to be able to do so during the planned discussion period June 17.

Archbishop Rozanski said that discussion in a virtual setting was not optimal and that if the discussion moved forward now, it should be as inclusive as possible.

“This topic and its implications are so far reaching that putting limits on the amount of time for discussion will not helps us or our people as we discern that course that must be taken,” the archbishop explained.

The St. Louis prelate was among 67 bishops and cardinals who sent a letter to Archbishop José H. Gomez of Los Angeles, USCCB president, in May asking that any discussion on “eucharistic coherence” be removed from the assembly agenda.

However, several bishops opposed the motion for more time put forth June 16, with some saying that allowing for unlimited discussion or even postponing such a discussion until the bishops convene in person during their fall general assembly in November in Baltimore would delay possible approval. If that happened, they said, implementation of a teaching document on the Eucharist would put it too far into the future.

Archbishop Joseph F. Naumann of Kansas City, Kansas, chairman of the U.S. bishops’ Committee on Pro-Life Activities, said he opposed the motion because it would be better to have a full-fledged discussion when a draft of the document was prepared and presented to the body of bishops in November.

Echoing the concerns of Archbishop Joseph E. Kurtz of Louisville, Kentucky, he described the motion as a “delaying tactic to make it impossible to vote on this document in a timely manner.”

Supporting the motion, Bishop John E. Stowe of Lexington, Kentucky, said he was concerned that “some of our brother bishops want to rush” development of the document and focus on whether President Joe Biden, a Catholic, should receive holy Communion because he supports legal abortion.

Bishop Stowe cited a May 7 letter to Archbishop Gomez from Cardinal Luis Ladaria, prefect of the Vatican’s Congregation for the Doctrine of the Faith, who urged the U.S. bishops to proceed with caution in their discussions about formulating a national policy “to address the situation of Catholics in public office who support legislation allowing abortion, euthanasia or other moral evils.”

The discussion turned to Bishop Kevin C. Rhoades of Fort Wayne-South Bend, Indiana, chairman of the doctrine committee, who said the document being proposed would not be a national policy and therefore the process being followed in discussing whether to move forward fell in line with Cardinal Ladaria’s message.

The draft would explore “eucharistic consistency” and the church’s teaching on the reception of Communion for all Catholics.

Bishop Joseph J. Tyson of Yakima, Washington, also supported Archbishop Rozanski’s motion, saying the U.S. bishops already had approved a statement in late 2006 that outlined the preparation needed to receive Communion worthily and said serious sin is a bar to receiving the Eucharist.

Titled “‘Happy Are Those Who Are Called to His Supper’: On Preparing to Receive Christ Worthily in the Eucharist,” the document says that a Catholic who “knowingly and obstinately” rejects “the defined doctrines of the church” or repudiates “her definitive teaching on moral issues” would not be in communion with the church and therefore should not receive Communion.

In the end the bishops defeated the motion, 59% to 41%. The agenda then was immediately approved by 86% of the bishops.