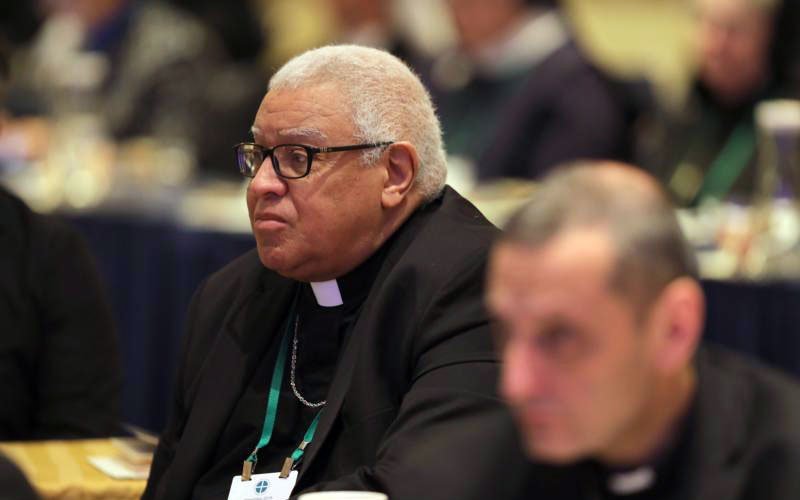 Bishop George V. Murry of Youngstown, Ohio, listens to a speaker Nov. 12 during the fall general assembly of the U.S. Conference of Catholic Bishops in Baltimore. (CNS photo by Bob Roller)

BALTIMORE (CNS) — U.S. bishops admitted during a wide-ranging discussion during their fall general assembly that parishioners are angry and continually ask how a charismatic clergyman was able to rise through church ranks despite widespread knowledge of allegations that he sexually abused seminarians and boys.

The predicament in which the church finds itself stemming from the fallout surrounding Archbishop Theodore E. McCarrick has left the bishops with few satisfactory answers for parishioners.

The bishops also are faced with having to reflect on how they can become better shepherds in a time of widespread doubt and distrust within the church, several bishops said during a 65-minute session Nov. 13 at the assembly in Baltimore.

Bishops said they have heard in writing and in listening sessions from upset parishioners about the renewed scandal surrounding months of reports of clergy sexual abuse and the failure to adequately respond to problem clergy. Words such as “outrage,” “anger” and “abuse of power” permeated their comments.

One of them, Bishop George V. Murry of Youngstown, Ohio, urged his fellow prelates to “go the extra mile, take the extra step to communicate to people that we hear what they have to say.”

Pope Francis accepted Archbishop McCarrick’s resignation from the College of Cardinals in July following reports of sexual abuse allegations involving minors decades ago and seminarians more recently. He has denied the allegations.

Bishop Barron added that he hopes the investigation sought by Cardinal Daniel N. DiNardo of Galveston-Houston, president of the U.S. Conference of Catholic Bishops, moves forward both in the United States and at the Vatican.

Cardinal Joseph W. Tobin of Newark, New Jersey, responded to several bishops who wondered about the status of the investigations. He said the Vatican’s inquiry is underway and that officials in each of the dioceses and archdioceses where the former cardinal served — New York; Newark and Metuchen, New Jersey; and Washington — are slowly moving forward, but that they are being complicated by factors outside of the church.

The New Jersey attorney general is investigating the church’s handling of abuse claims and is limiting how quickly church officials in Newark and Metuchen can access its files, Cardinal Tobin said.

“We are ready to go, but need the attorney general’s go ahead,” he said.

As the conversation opened, Cardinal DiNardo said that a task force of three former USCCB presidents has been formed and they will provide regular communication with bishops and the wider church about responses to the abuse crisis. The announcement met with wide approval from the assembly.

The conversation also surfaced some willingness among bishops to pass some sort of resolution to act despite a Vatican letter asking that no action be taken on proposals that include establishing standards of episcopal accountability and forming a commission that would handle complaints when the standards are violated.

Bishop Thomas J. Paprocki of Springfield, Illinois, offered that a nonbinding vote be taken to convey a sense of the bishops’ intentions to tackle the abuse crisis and send a message to parishioners.

“We are not branch managers of the Vatican,” he said. “Our people are crying out for some action.”

Other comments offered suggestions for the need to recommit to transparency and accountability in ministry and the need to restore the trust of the laity across the church.

“How bishops are held accountable when there is misconduct is not clear,” said Archbishop George J. Lucas of Omaha, Nebraska. “I think there’s a process out there that happens some time, but it’s not timely and it’s not clear.”

He also called on the USCCB leadership to appeal to Pope Francis for help in seeking to restore trust and accountability.

At various points during the conversation, bishops reflected on the spiritual side of their lives, with some suggesting that the way to restore trust and develop a better understanding of what it means to be a prelate involves a deeper relationship with Jesus.

Cardinal Roger W. Mahony, retired archbishop of Los Angeles, recalled the life of St. Charles Borromeo, who faced a church in crisis in the 16th century, who invited priests and bishops to be more collegial and to do so through prayer.

“It would seem to me that we as bishops need to form more and more prayerful relationships among ourselves … and ongoing opportunities for our own relationship based totally on Jesus Christ,” he said.

Archbishop Alexander K. Sample of Portland, Oregon, said he has taken a “hard look” at his life and how he carries out his ministry since the scandal arose in June. Jesus offers each person facing troubled times. He said he has found comfort in the “saving power” of Jesus.

Future historians will study how the bishops responded to the abuse crisis, he said, suggesting that the bishops “recommit to the sacred that has been given to us by Jesus Christ.”

Being grounded in the mission of Jesus that calls for serving the faithful as shepherds is vital in restoring trust, explained Archbishop Thomas G. Wenski of Miami.

We will regain trust by doing what we are supposed to be doing as pastors and shepherds,” he said. “We walk with them and we can regain their trust.”

Bishop W. Shawn McKnight of Jefferson City, Missouri, urged the bishops “to remember the necessity of the laity in helping us get out of this mess.”

He proposed that the USCCB employ the services of expert lay Catholics to study what he recalled Archbishop Bernard A. Hebda of St. Paul and Minneapolis describing during a homily at Mass for the assembly Nov. 12 as “the root causes of the abuse of power by U.S. hierarchy.”

Laypeople, he added, are willing to partner with the bishops to guide the church out of the crisis it faces.