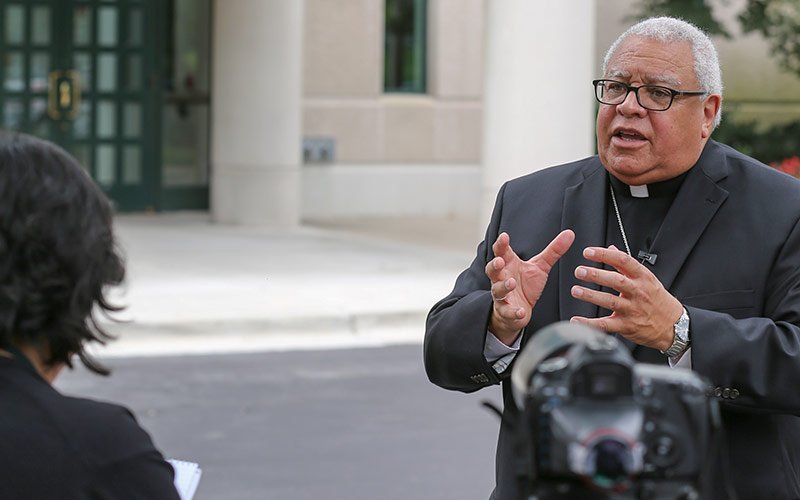 Bishop George V. Murry of Youngstown, Ohio, responds to a question from a Catholic News Service reporter Aug. 23 outside the U.S. Conference of Catholic Bishops headquarters in Washington. Bishop Murry was responding to questions after being named chair of the U.S. bishops' new Ad Hoc Committee Against Racism.

WASHINGTON (CNS) — Saying there is an “urgent need” to address “the sin of racism” in the country and find solutions to it, the U.S. Conference of Catholic Bishops has established a new Ad Hoc Committee Against Racism and named one of the country’s African-American Catholic bishops to chair it.

Cardinal Daniel N. DiNardo of Galveston-Houston, USCCB president, initiated the committee Aug. 23 “to focus on addressing the sin of racism in our society, and even in our church, and the urgent need to come together as a society to find solutions.”

“Recent events have exposed the extent to which the sin of racism continues to afflict our nation,” Cardinal DiNardo said in a statement. “The establishment of this new ad hoc committee will be wholly dedicated to engaging the church and our society to work together in unity to challenge the sin of racism, to listen to persons who are suffering under this sin, and to come together in the love of Christ to know one another as brothers and sisters.”

The naming of members to serve on the new body will be finalized in coming days, the USCCB said in an announcement. It added that the committee’s mandate “will be confirmed at the first meeting, expected very shortly.”

“I look forward to working with my brother bishops as well as communities across the United States to listen to the needs of individuals who have suffered under the sin of racism and together find solutions to this epidemic of hate that has plagued our nation for far too long,” Bishop Murry said in a statement.

“Through Jesus’ example of love and mercy, we are called to be a better people than what we have witnessed over the past weeks and months as a nation. Through listening, prayer and meaningful collaboration, I’m hopeful we can find lasting solutions and common ground where racism will no longer find a place in our hearts or in our society.”

The new ad hoc committee also will “welcome and support” implementation of the U.S. bishops’ new pastoral letter on racism, expected to be released in 2018. In 1979, the bishops issued a pastoral in racism titled “Brothers and Sisters to Us,” in which they addressed many themes, but the overall message then as today was “racism is a sin.”

Creation of a new formal body that is part of the USCCB — formed on the USCCB Executive Committee’s “unanimous recommendation” — speaks to how serious the U.S. Catholic Church leaders take the problem of racism in America today.

It is the first ad hoc committee the bishops have established since instituting the Ad Hoc Committee for Religious Liberty in 2011 to address growing concerns over the erosion of freedom of religion in America. The federal governments mandate that all employers, including religious employers provide health care coverage of artificial contraceptives and abortifacients was one of the key issues that prompted formation of the committee.

Chaired by Baltimore Archbishop William E. Lori, that body was elevated to full USCCB committee status during the bishops’ spring assembly in Indianapolis this past June.

In addition to the Executive Committee’s recommendation, the USCCB said, the decision to initiate the new Ad Hoc Committee Against Racism also was made in consultation with members of the USCCB’s Committee on Priorities and Plans.

The formation of the ad hoc committee also follows the conclusion of the work of the Peace in Our Communities Task Force. The task force was formed in July 2016 by then-Archbishop Joseph E. Kurtz of Louisville, Kentucky, who was then USCCB president. He initiated it in response to racially related shootings in Baton Rouge, Louisiana, as well as in Minneapolis and Dallas.

To head it he named Archbishop Wilton D. Gregory of Atlanta, one of the nation’s African-American prelates who was the first black Catholic bishop to be president of the USCCB (2001-2004).

The task force’s mandate was to explore ways of promoting peace and healing around the country. Archbishop Kurtz also wanted the bishops to look for ways they could help the suffering communities, as well as police affected by the incidents.

On Nov. 14, 2016, during the USCCB’s fall general assembly, Archbishop Gregory told the bishops to issue, sooner rather than later, a document on racism.

“A statement from the full body of bishops on racism is increasingly important at this time,” said the archbishop in reporting on the work of the task force.

He said the president of the bishops’ conference and relevant committees need to “identify opportunities for a shorter-term statement on these issues, particularly in the context of the postelection uncertainty and disaffection.”

He also urged prayer, ecumenical and interfaith collaboration, dialogue, parish-based and diocesan conversations and training, as well as opportunities for encounter.

The bishops’ 1979 pastoral, now in its 19th printing, declared: “Racism is a sin: a sin that divides the human family, blots out the image of God among specific members of that family, and violates the fundamental human dignity of those called to be children of the same Father.”