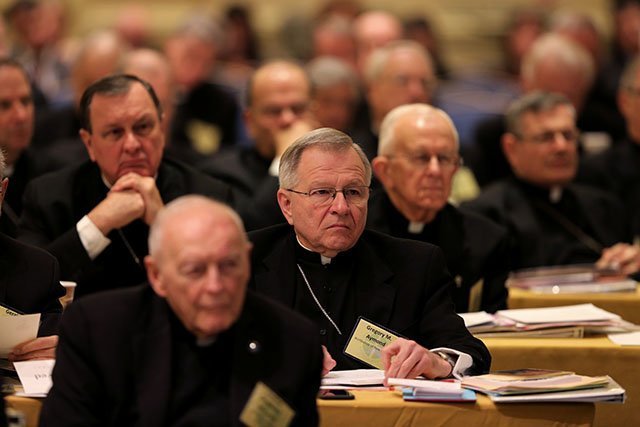 Archbishop Gregory M. Aymond of New Orleans, center, listens to a speaker Nov. 10 during the annual fall general assembly of the U.S. Conference of Catholic Bishops in Baltimore.

BALTIMORE (CNS) — The role of Catholic bishops is to accompany their family of the church through their fears and concerns, the president of the U.S. Conference of Catholic Bishops said Nov. 10.

In his first presidential address since his election last November, Archbishop Joseph E. Kurtz told his brother bishops gathered in Baltimore for the annual fall general assembly Nov. 10-13 that "as pastors, we accompany so many families who face their own fears and concerns and who yearn to experience the love of Jesus in and through his loving family — the church."

"Together, brothers, we seek to walk with these families and to build their confidence in faith," said the archbishop, who heads the Archdiocese of Louisville, Kentucky.

"We have to let our young people know that their lives are worth living and that they were born for eternal glory, not for glamour, or guns or sensationalism," he said. "They are crying out to us. They desperately need to be inspired, to have the life of Christ breathed back into them."

The first day’s agenda included reports on the recently concluded extraordinary Synod of Bishops on the family; Catholic education and an outreach to Hispanic students in underserved communities; the progress of planning for the 2015 World Meeting of Families in Philadelphia; the status of the 2013-16 USCCB strategic plan, "The New Evangelization: Faith, Worship, Witness"; the 2015 Fortnight of Freedom; and the defense of marriage.

On the second day of the assembly — the only other full day of public sessions — the bishops were to choose a new secretary-elect for the USCCB, and vote for the chairmen-elect of five committees — communications, cultural diversity, doctrine, national collections and pro-life activities. They also were to choose new members for the board of the Catholic Legal Immigration Network and Catholic Relief Services.

Other action items to be addressed Nov. 11 included the 2015 USCCB budget, the 2016 diocesan assessment, and a proposal to proceed on a revision to the "Ethical and Religious Directives for Catholic Health Care Services." The bishops also were to conduct the canonical consultation on the sainthood cause of Father Paul Wattson. Father Wattson was an Episcopal priest who co-founded the Society of the Atonement.

The first day’s business wrapped up by mid-afternoon, so the bishops could concelebrate Mass at the city’s Basilica of the Assumption of the Blessed Virgin Mary to mark the 225th anniversary of the establishment of the Archdiocese of Baltimore. Baltimore was the first diocese founded in the United States.

In his report earlier in the afternoon, Archbishop William E. Lori of Baltimore, chairman of the Ad Hoc Committee for Religious Liberty, told the bishops that this committee — extended for another three years — would place more of an emphasis on teaching and expanding networks with Catholic lay groups, interfaith and ecumenical partners.

He said the 2015 Fortnight of Freedom would particularly highlight the 50th anniversary of the Second Vatican Council document on religious liberty, "Dignitatis Humanae," and would provide a "great opportunity to teach about religious liberty and evangelize about it."

Archbishop Salvatore J. Cordileone of San Francisco, chairman of the Subcommittee for the Promotion and Defense of Marriage, spoke of the challenges facing the Catholic Church’s support for traditional marriage.

"For several years now," he said, "the work of the subcommittee has sought to defend marriage’s unique meaning while also calling attention to the real negative consequences and anticipated threats that marriage redefinition poses to religious liberty and freedom of conscience."

The archbishop urged the bishops not to "shy away from challenges" but to take heart from the worlds and example of Pope Francis and advance a "culture of encounter, accompaniment, and witness."

The Archdiocese of Philadelphia formally opened its arms to the world as Archbishop Charles J. Chaput of Philadelphia told the U.S. Catholic bishops that registration has officially begun for the World Meeting of Families next year in the city.

Up to 15,000 attendees are expected for the gathering of families from around the country and the world Sept. 22-25, 2015. With the slate of speakers and activities planned for adults and youth, it will be the largest convention to be held in Philadelphia next year. Registration and other information is available at the website www.worldmeeting2015.org.

"The World Meeting of Families will deal with a wide range of family issues where our faith is both needed and tested," the archbishop said. "These are matters that affect families not only here in the United States but on a global scale."

In a morning session and at a news conference that followed, some time was spent reporting on the recently concluded extraordinary Synod of Bishops on the family in October.

Speaking to reporters, Archbishop Kurtz of Louisville acknowledged the differences in the synod experienced by the bishops participating in it and news accounts disseminated outside the synod, saying "a tale of two synods" emerged from it.

Those differences were highlighted by Cardinal Timothy M. Dolan of New York in remarks delivered during the assembly’s morning session.

He said some reports made it sound like the synod was "confrontational and divisive," "hijacked by left-wing dissenters intent on eluding doctrine," but in reality, it "was a synod of consensus … led by a pope with a radical charism for attentive listening."

Contributing to this roundup were Patricia Zapor, Mark Pattison and Carol Zimmermann.