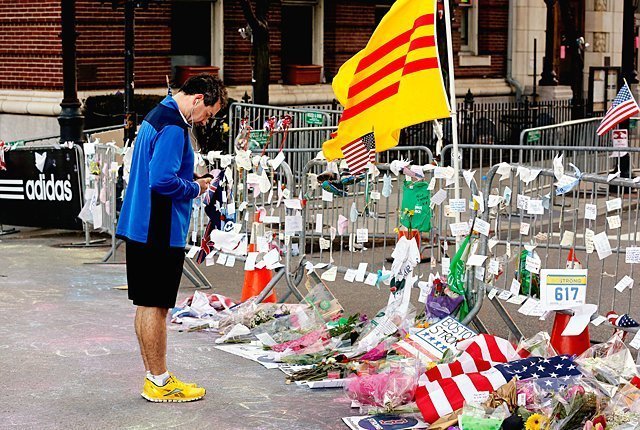 An early morning runner says a prayer at a memorial to the victims of the Boston Marathon bombings near the scene of the blasts in this April 2013 file photo.

BOSTON (CNS) — As the trial of Boston Marathon bombing defendant Dzhokhar Tsarnaev went to the jury April 6, the Catholic bishops of Massachusetts released a statement reiterating the church’s teaching on the death penalty.

If convicted, Tsarnaev could be sentenced to death or to life without the possibility of parole.

The Catholic Church opposes the death penalty except “if this is the only possible way of effectively defending human lives against the unjust aggressor,” but such cases “are very rare, if not practically nonexistent.”

In Tsarnaev’s case, the Massachusetts bishops said, the defendant “has been neutralized and will never again have the ability to cause harm. Because of this, we … believe that society can do better than the death penalty.”

Tsarnaev’s trial in federal court in Boston began March 4, where prosecutors have presented evidence that he and his older brother, Tamerlan Tsarnaev, planted the bombs that exploded April 15, 2013, near the finish line at the Boston Marathon. The attack wounded more than 260 people and killed 8-year-old Martin Richard of Dorchester; 29-year-old Medford native Krystle Campbell; and Lu Lingzi, 23, a Chinese national studying at Boston University.

Later, Massachusetts Institute of Technology police officer Sean Collier was killed as the brothers attempted to escape from the Boston area.

From their opening statements, his lawyers admitted that Tsarnaev participated in the crimes.

Instead, in an apparent attempt to avoid the death penalty, the defense centered their arguments on demonstrating that older brother Tamerlan was the mastermind behind the plot and that then 19-year-old Dzhokhar was merely a follower.

In their statement, the bishops acknowledged the profound effect of the bombings and their aftermath has had on the Boston area.

“The Boston Marathon Bombing trial is a painful reminder of the harm that impacts many people even beyond those who are killed or maimed by violent criminal acts,” the bishops said in their statement.

The statement also addressed the specifics of the Tsarnaev trial and reiterated Catholic Church teaching on the use of the death penalty.

“Given that the defendant, Dzhokhar Tsarnaev, is being tried in federal court with the possibility of capital punishment, and that the bishops have testified against capital punishment in the past, we feel it is fitting to clarify the church’s teaching regarding the use of the death penalty,” it said.

Drawing on the Catechism of the Catholic Church, the statement said, “The church has taught that the cases in which the execution of the offender is an absolute necessity are ‘rare, if not practically nonexistent.’ The church’s teaching is further developing in recognition of the inherent dignity of all life as a gift from God.”

The statement also quoted the March 20 remarks by Pope Francis to the International Commission Against the Death Penalty, in which the pope called capital punishment “an offense against the inviolability of life and the dignity of the human person.”

“When the death penalty is applied, it is not for a current act of oppression, but rather for an act committed in the past. It is also applied to persons whose current ability to cause harm is not current, as it has been neutralized — they are already deprived of their liberty,” the pope said.

The bishops said with the defendant behind bars, the interest of protecting public safety has been fulfilled.

They added, “As the bishops of the United States said in their 2005 statement ‘A Culture of Life and the Penalty of Death,’ ‘No matter how heinous the crime, if society can protect itself without ending a human life, it should do so.’ We believe these words remain true today in the face of this most terrible crime.”

Pineo is a staff writer and Tracy is managing editor at The Pilot, newspaper of the Archdiocese of Boston.