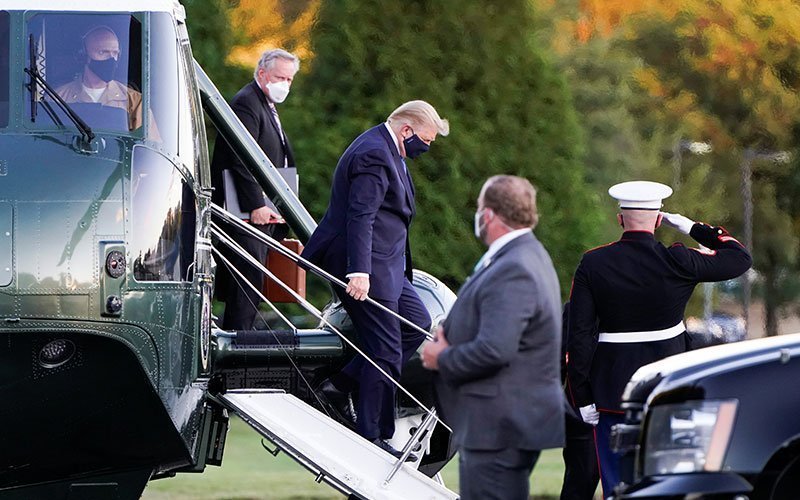 WASHINGTON (CNS) — Los Angeles Archbishop Jos√© H. Gomez, president of the U.S. Conference of Catholic Bishops, said he was praying for President Donald Trump and first lady Melania Trump, adding, “May God grant them full healing and may he keep their family safe and healthy.”

“Let us keep praying for all who are suffering because of the novel coronavirus, especially the sick and dying and their families, and all those who have lost loved ones,” he said in a statement late Oct. 4. “May God give them hope and comfort, and may he bring an end to this pandemic.”

In a tweet just before 1 a.m. Oct. 2, the president announced he and the first lady had tested positive for COVID-19.

Late Oct. 2, President Trump was flown by helicopter to Walter Reed National Military Medical Center just outside Washington in Bethesda, Maryland, for a few days out of “an abundance of caution,” the White House said, adding the 74-year-old president was experiencing “mild symptoms.”

Trump was working from the hospital’s presidential offices while receiving a drug regimen to treat the virus. Early Oct. 5, Dr. Sean P. Conley, a Navy commander and physician to the president, said Trump was “doing great” and it was possible the president would be discharged to return to the White House later that day, where he would continue treatments.

After testing positive, the first lady, 50, tweeted she was experiencing “mild symptoms,” including a cough and a headache, but overall was “feeling good. I am looking forward to a speedy recovery.” She was quarantining at the White House.

In other reaction about the Trumps’ testing positive, Chicago Cardinal Blase J. Cupich tweeted Oct. 2 the news was “a sobering reminder of our shared vulnerability, but also our common responsibility for the good of one another.”

“As we continue to pray for the full recovery of all those suffering from COVID-19, we now include President and Mrs. Trump & all those recently diagnosed,” the cardinal said.

On the evening of Oct. 1, Trump and former President Joe Biden had addressed the 75th annual Al Smith dinner via recorded video remarks.

The fundraiser of the Alfred E. Smith Memorial Foundation each year brings together political candidates on opposite sides of the aisle — including the Republican and Democratic presidential nominees every four years — to face off and trade barbs in good humor. This year, because of the coronavirus, the speakers’ dais was virtual and remarks took a more serious tone.

The event was livestreamed from the Manhattan residence of Cardinal Timothy M. Dolan, who as New York’s archbishop is chair of the foundation and presides over the dinner.

“Thanks to our honored speakers, President @realDonaldTrump and former Vice President @JoeBiden, for virtually joining us last night for the Al Smith Dinner. Please also join me in praying for the President, @FLOTUS Melania Trump, & all who suffer from or are affected by Covid-19.”

Among other Catholic bishops tweeting prayers for the Trumps and all those with COVID-19 were Bishop Michael F. Olson of Fort Worth, Texas, and Bishop Thomas J. Tobin of Providence, Rhode Island.

“Remember to pray for @POTUS and @FLOTUS and their swift recovery from #COVID19 and for the peace and good health of all in our country,” Bishop Olson said.

“Praying today for the health of President Trump and the First Lady, and for all who are battling COVID. May God grant healing, comfort and peace to his people,” Bishop Tobin said.

Dr. Michael Parker, president of the Catholic Medical Association, was among others issuing a statement about the Trumps: “Our prayers are with the president and first lady as they work to overcome COVID-19. We continue to pray for all those suffering from this virus and their loved ones.”

In an 18-second video filmed at the White House and tweeted after he arrived at Walter Reed, President Trump said: “I want to thank everybody for the tremendous support. I’m going to Walter Reed hospital. I think I’m doing very well but we’re going to make sure that things work out. The first lady is doing very well. So thank you very much. I appreciate it. I will never forget it.”

Conley said late Oct. 2 that in consultation with Walter Reed and Johns Hopkins University, he had recommended the president be taken to Walter Reed “for further monitoring” and treatment with Remdesivir, an antiviral drug. Trump also is being given Regeneron’s antibody medication, along with zinc and vitamin D; famotidine, the medication in Pepcid, for heartburn or acid reflux; and melatonin and a daily aspirin.

“The White House medical team and I will maintain a vigilant watch, and I appreciate the support provided by some of our country’s greatest medical professionals and institutions,” Conley said after Trump was admitted to Walter Reed. “Rest assured I expect the president to continue carrying out his duties without disruption while recovering, and I will keep you updated on any future developments.”

In a news conference early Oct. 3, Conley said Trump was doing “very well” and “in exceptionally good spirits.” Later news coverage of Chief of Staff Mark Meadows’ remarks that he had made to reporters only on background quoted Meadows as saying the president’s “vitals over the last 24 hours were very concerning, and the next 48 hours will be critical in terms of his care.”

Over the weekend, dozens of Trump supporters rallied just outside the gates of Walter Reed, raising big flags and signs, with cars honking as they passed by. On Oct. 4, Trump, wearing a mask and with the permission of his doctors, left the hospital briefly to ride in a motorcade past his supporters.