Bishops on 'ad limina' say their unity with pope, each other is clear - Catholic Courier 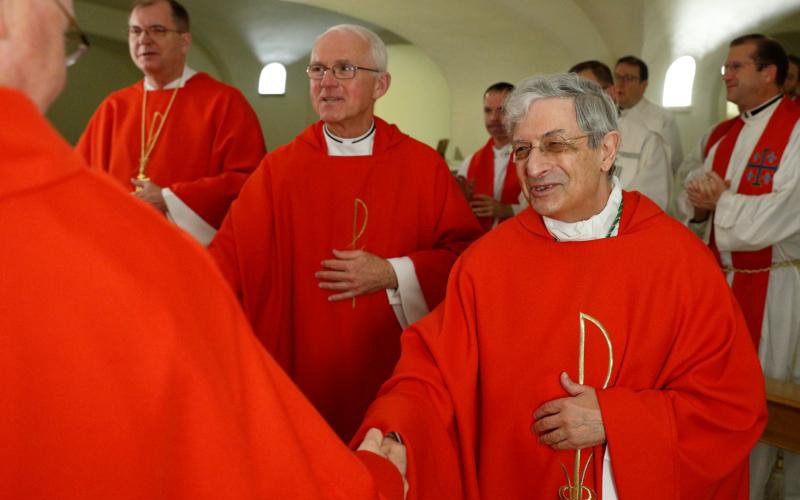 Bishop Salvatore R. Matano of Rochester and other bishops from the state of New York exchange the sign of peace as they concelebrate Mass in the crypt of St. Peter's Basilica at the Vatican in this Nov. 14, 2019, photo. (CNS photo/Paul Haring)

VATICAN CITY (CNS) — As people on pilgrimage often report, what happens along the way can be just as important as what happens at the destination.

Every bishop in the world is required regularly to make a visit “ad limina apostolorum” (to the threshold of the apostles) to pray at the tombs of Sts. Peter and Paul, to meet with the heads of Roman Curia offices and to discuss with the pope the status of their dioceses.

Groups of U.S. bishops began their visits in early November; the last group is scheduled to conclude its visit Feb. 22, the feast of the Chair of St. Peter, the symbol of the teaching authority of the popes.

“I wish there was a way I could have had a GoPro camera on my forehead sitting with the pope, so people could see the pope — the person, the one who doesn’t have a script — talk from the heart,” the bishop told Catholic News Service. “For three hours, he spoke from the heart.”

After the meeting, the bishop tweeted: “He is a good and holy man and even more now I will defend him.”

Bishop Stika said he told Pope Francis not to pay attention to “the small segment” of U.S. Catholics that are highly critical of him. However, he also said he told the pope that sometimes he is confused by things he says, especially during his inflight press conferences. The pope, he said, responded that he also worries about that, especially since there is little time to answer each question.

But, the bishop said, if people really want to know what the pope thinks, they just need to read his official documents and not rely on “drive-by comments” posted on Twitter or on obviously skewed websites.

“How many people don’t read the documents and let someone think for them?” he asked. “Anything he has taught has not been contrary to dogma, to the deposit of faith. He teaches the faith.”

“Some people, and it’s a small group of people, are focusing in on him in these horrible attacks,” Bishop Stika said. They hide behind Twitter accounts, “affiliated with the church sometimes, and they spew out this opinion that is hate-filled.”

One place that does not happen, he said, is among the U.S. bishops, even though they have different experiences and opinions on a range of issues.

“We’re not a bunch of robots or puppets,” Bishop Sitka said. “We are not divided; we just have different life experiences” and are trying to meet different pastoral needs.

Sometimes some media portray “the bishops as very divided between anti-Francis and pro-Francis. I’m telling you, I don’t see it,” the archbishop said.

“Do we have differences among ourselves?” The answer is obvious; “brothers have differences. Sometimes brothers fight and argue,” he said. But “I sense not only an emotional or prayerful closeness, but as I listen to bishops talk about their dioceses, I see they are really trying hard to bring the themes of this pontificate and the emphases of this pontificate into their dioceses in very practical ways.”

Serving as the principal celebrant and homilist Dec. 3 at the bishops’ Mass at the Basilica of St. Paul Outside the Walls, Archbishop Timothy P. Broglio of the U.S. Archdiocese for the Military Services also spoke about the impact of making the pilgrimage together.

The bishops’ “ad limina” visits, he said, “are days of renewal for us: the long hours of meetings, the opportunity to pray together, the moments of conviviality in this great city, offer us an occasion of grace and growth as we celebrate the eager longing that marks the Advent season.”

Bishop Mark E. Brennan was appointed in July to lead the Diocese of Wheeling-Charleston, West Virginia, after the resignation of Bishop Michael J. Bransfield amid allegations of sexual and financial misconduct.

Bishop Brennan, too, was on his “ad limina” pilgrimage to Rome Dec. 2-6.

“I think the bishops are very united,” he told Catholic News Service; “united among ourselves and with the Holy Father.”

The bishop said he left the meeting with the pope convinced of the U.S. bishops’ unity with the pope, “who is really the lynchpin of unity in the whole church and in faith and love.”

Contributing to this story was Carol Glatz in Rome.