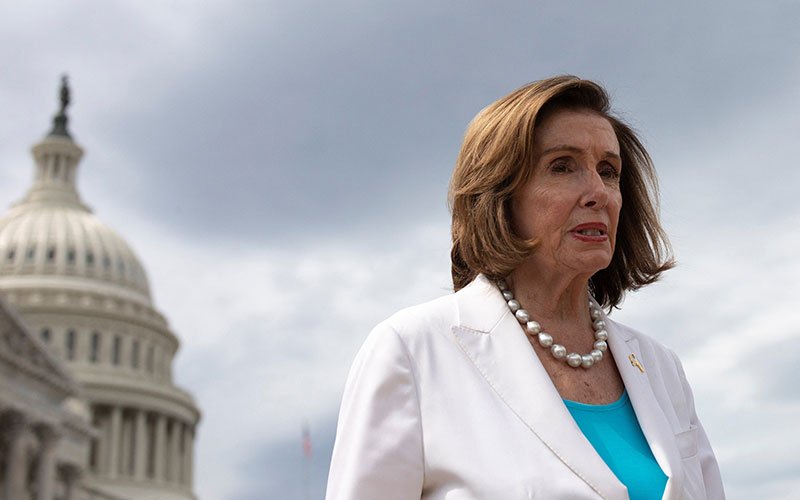 U.S. Speaker of the House Nancy Pelosi, D-Calif., is seen on Capitol Hill in Washington May 18, 2022. (CNS photo by Tom Brenner/Reuters)

Pelosi not ‘to be admitted’ to Communion over her abortion stand

WASHINGTON (CNS) — A number of U.S. Catholic bishops praised San Francisco Archbishop Salvatore J. Cordileone for his “courageous” action in declaring May 20 that House Speaker Nancy Pelosi, D-Calif., is not “to be admitted” to Communion because of her stand on legalized abortion.

“I applaud Archbishop Cordileone’s patient and persevering efforts to enlighten Speaker Pelosi about the moral gravity of her extreme efforts to promote, to advocate and to initiate legislation to enshrine legalized abortion into federal law,” said Archbishop Joseph F. Naumann of Kansas City, Kansas.

In a statement released shortly after the San Francisco’s prelate’s announcement, he said: “I fully support both the pastoral and courageous actions that Archbishop Cordileone has now taken in an effort to awaken Speaker Pelosi’s conscience and at the same time to protect Catholics in the Archdiocese of San Francisco and throughout the country from being confused by Speaker Pelosi’s radical support for abortion, while claiming to be a faithful Catholic.”

“I pray that Speaker Pelosi will have a change of heart,” added Archbishop Naumann, former chairman of the U.S. bishops’ pro-life committee.

“I know Archbishop Cordileone to be a shepherd with the heart and mind of Christ, who truly desires to lead others towards Christ’s love, mercy and promise of eternal salvation,” he said.

“As Archbishop Cordileone writes, ‘conversion is always better than exclusion, and before any such action can be taken it must be preceded by sincere and diligent efforts at dialogue and persuasion,'” he continued. “He has made every attempt to try and avoid this step.”

“As I have previously written and Archbishop Cordileone makes clear as well, this issue is not about politics or simply enforcing church rules, but rather about love — love for the individual and love for the entire community,” said the Denver prelate.

On May 24, in an appearance on MSNBC’s “Morning Joe,” Pelosi commented on Archbishop Cordileone’s banning her from Communion.

“I come from a largely pro-life Italian American Catholic family, so I respect people’s views about that, but I don’t respect us foisting it onto others,” she said.

For Pelosi, the issue is about more than just abortion, she said, and women and families need to know that “these same people” who oppose abortion “are against contraception, family planning, in vitro fertilization. It’s a blanket thing and they use abortion as the front man for it.”

She also said San Francisco’s archbishop gives Communion to politicians who, she said, support the death penalty, which the church also condemns.

According to a report in Politico, a Washington news outlet, Pelosi was seen receiving Communion May 22 during Mass in Washington at Holy Trinity Catholic Church in Georgetown, where President Joe Biden, also a Catholic, often goes to Mass. Biden also supports legalized abortion.

Jack Jenkins of Religion News Service reported May 23 that in a canon lawyer at The Catholic University of America told him in an email that Archbishop Cordileone barring Pelosi from Communion applies only within his archdiocese.

Critics of Archbishop Cordileone included Pelosi’s hometown daily newspaper, the San Francisco Examiner, which accused the prelate of “grandstanding” on the abortion issue “and picking a fight with the most powerful woman — and second-most powerful Catholic — in American politics.”

The paper said the archbishop’s “efforts to sow division and politicize the faith have intensified.”

“In light of Cordileone’s resurgent efforts to create discord, we repeat the call for Pope Francis to remove him and replace him with a leader who can unify rather than divide. … It is Nancy Pelosi, not Archbishop Cordileone, who reflects the true spirit of Christian care in the city of St. Francis.”

The editorial praised Pelosi as someone “who has worked tirelessly to improve the lives of the poor, the suffering and the oppressed,” all of which Archbishop Cordileone likewise praised.

An online petition critical of Archbishop Cordileone urging him “to stop playing politics with Communion” had garnered signatures of more than 10,000 Catholics and other Christians as of May 25, according to the petition’s sponsors, Faithful America and Faith in Public Life.

Bishop Strickland tweeted May 25: “The concern for Mrs Pelosi’s eternal salvation extends to the Diocese of Tyler. She is barred from Communion here until she repents & stops advocating the murder of children. Pray for her heart to be turned to God & away from the power of this world.”

“Please know that I find no pleasure whatsoever in fulfilling my pastoral duty here,” Archbishop Cordileone said in his May 20 statement. “Speaker Pelosi remains our sister in Christ. Her advocacy for the care of the poor and vulnerable elicits my admiration. I assure you that my action here is purely pastoral, not political. I have been very clear in my words and actions about this.”

In early May of last year, Archbishop Cordileone issued a pastoral that focused on the unborn, Communion and Catholics in public life titled “Before I Formed You in the Womb I Knew You.” It was the first pastoral he has issued.

It emphasizes that “those who reject the teaching of the church on the sanctity of human life and those who do not seek to live in accordance with that teaching should not receive the Eucharist.”

“Conversion is always better than exclusion, and before any such action can be taken, it must be preceded by sincere and diligent efforts at dialogue and persuasion,” Archbishop Cordileone wrote in his statement this May. He noted he had sent Pelosi a separate letter about the consequences of citing her faith in justifying abortion and refusing to retract her stance on the issue.

Pelosi considers abortion health care and, as recently as May 13 in remarks on the steps of the U.S. Capitol, she warned the Supreme Court to keep its “hands off women’s reproductive health care.” She also said if Roe is overturned, Republicans have a “dangerous and extreme agenda” that could see “an all-out assault” on more rights.

Her position on abortion “has become only more extreme over the years, especially in the last few months,” Archbishop Cordileone said. “Just earlier this month she once again, as she has many times before, explicitly cited her Catholic faith while justifying abortion as a ‘choice,’ this time setting herself in direct opposition to Pope Francis.”

The archbishop opened his 1,300-word letter by saying that the pope “has been one of the world’s most vocal advocates of human dignity in every stage and condition of life.”