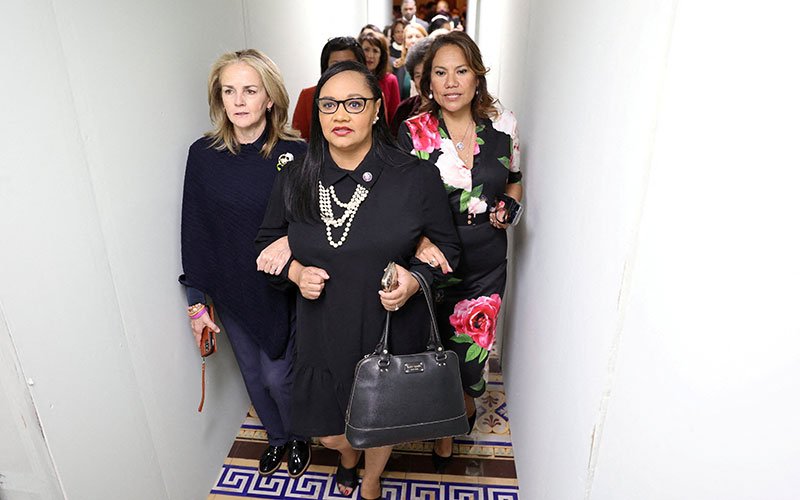 WASHINGTON (CNS) — After the U.S. Senate failed May 11 to advance a “radical” abortion bill, the chairmen of two U.S. bishops’ committees urged Congress “to stop pushing abortion as the solution to needs of women and young girls” and “embrace” public policy initiatives that protect “both mother and child.”

The Women’s Health Protection Act, or S. 4132, did not get the 60 votes needed to end debate on the bill and advance it to a vote on the substance of the measure. The vote to end debate was 51-49.

The bill, which passed in the U.S. House passed in September 2021 and failed in the Senate earlier this year, was “far more extreme than Roe v. Wade,” said Archbishop William E. Lori of Baltimore, chairman of the U.S. Conference of Catholic Bishops’ Committee on Pro-Life Activities, and Cardinal Timothy M. Dolan of New York, chairman of the Committee for Religious Liberty.

It would have “imposed abortion on demand nationwide at any stage of pregnancy through federal statute” and “eliminated pro-life laws at every level of government — including parental notification for minor girls, informed consent, and health or safety protections specific to abortion facilities,” they said in a statement released late May 11.

The measure also “would have compelled all Americans to support abortions here and abroad with their tax dollars,” the prelates said. It also “would likely have forced health care providers and professionals to perform, assist in, and/or refer for abortion against their deeply held beliefs, as well as forced employers and insurers to cover or pay for abortion,” they added.

Like Archbishop Lori and Cardinal Dolan, Senate opponents of S. 4132 emphasized it would have gone far beyond Roe v. Wade, including eliminating existing religious freedom protections.

Two Republicans who consistently vote in favor of legal abortion — Sens. Susan Collins of Maine and Lisa Murkowski of Alaska — said even they could not vote for S. 4132 and planned to introduce their own measure to codify Roe in federal law.

S. 4132, also called WHPA, went “far beyond what is necessary to codify the abortion rights in Roe and Casey,” said Collins said in a statement.

She was referring to the Supreme Court’s 1973 Roe decision legalizing abortion nationwide and its 1992 ruling in Planned Parenthood v. Casey, which prohibited regulations that created an “undue burden” on women seeking an abortion.

“Contrary to claims from Senate Democratic leaders that their bill would not infringe upon the religious rights of individuals and religious institutions,” she said, “the WHPA explicitly invalidates the Religious Freedom Restoration Act in connection with abortion and supersedes other long-standing, bipartisan conscience laws, including provisions in the Affordable Care Act, that protect health care providers who choose not to offer abortion services for moral or religious reasons.”

In their statement, Archbishop Lori and Cardinal Dolan called the now-failed Senate legislation “an utterly unjust and extreme measure” and said they were “relieved that the Senate vote to advance this bill failed for the second time in less than three months.”

“More than 60 million unborn children have already lost their lives to abortion, and countless women suffer from the physical and emotional trauma of abortion. This radical bill would add millions more to that tragic toll,” they continued.

“As a nation built on the recognition that every human being is endowed by its Creator with the unalienable rights to life, liberty and the pursuit of happiness,” Archbishop Lori and Cardinal Dolan said, “we implore Congress to stop pushing abortion as a solution to the needs of women and young girls, and instead embrace public policy that fully respects and facilitates these rights and the needs of both mother and child.”

The case before the nation’s high court examines the constitutionality of Mississippi’s 15-week abortion ban, and for months many have anticipated the ruling in the case would overturn the Roe and Casey decisions.

This prompted the House to vote for the Women’s Health Protection Act in the fall and supporters to push the Senate to pass its companion measure.

On May 2, a draft of the high court’s opinion in Dobbs, written by Justice Samuel Alito, was leaked, leading to demonstrations on both sides of the abortion issue.

In response to the leak, the USCCB issued a statement May 10 from Archbishop José H. Gomez of Los Angeles, conference president, and Archbishop Lori, as pro-life chairman, that calls on the faithful “to unite in fasting and prayer” on the feast of Our Lady of Fatima, May 13, for several intentions, including:

— For the nation, “the integrity of our judicial system” and that all branches of government “be dedicated to seeking the common good and protecting the dignity and rights of the human person, from conception to natural death.”

— For Roe and Casey to be overturned.

— “For the conversion of the hearts and minds of those who advocate for abortion” and “for a new commitment to building an America where children are welcomed, cherished, and cared for; where mothers and fathers are encouraged and strengthened; and where marriage and the family are recognized and supported as the true foundations of a healthy and flourishing society.”

— For Mary’s intercession and guidance as the Catholic Church “continues to walk with mothers and families in need, and continues to promote alternatives to abortion, and seeks to create a culture of life.”