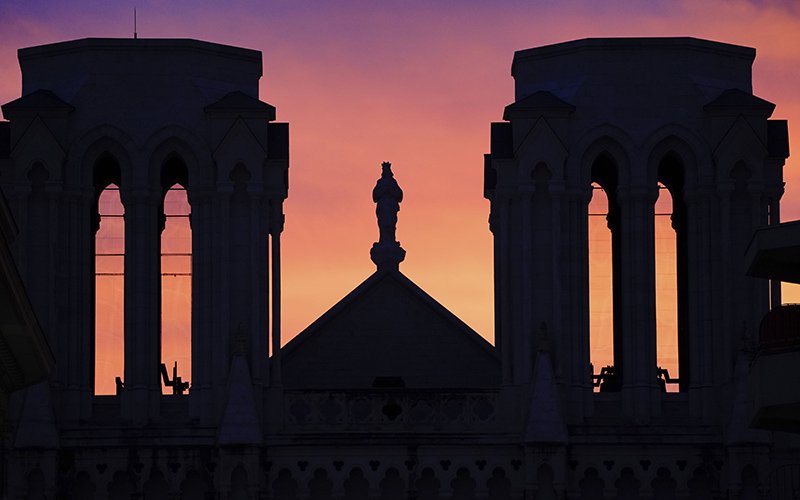 The Notre Dame Basilica is pictured at sunset in Nice, France, Oct. 29, 2020. Earlier in the day, three people were murdered in a knife attack at the church. France raised its alert level to maximum after the attack. (CNS photo by Norbert Scanella/PanoramiC via Reuters)

WASHINGTON (CNS) — Bishops in the United States and around the world expressed condolences after three people were murdered before Mass Oct. 29 in the basilica in Nice, France.

French police have confirmed they are treating the killings as a terrorist incident. The attacks came less than two weeks after a Paris teacher was beheaded Oct. 16 by a Muslim migrant; the teacher had shown satirical cartoons of the prophet Muhammad to school children in a lesson about free speech.

Shortly after the attacks, Pope Francis sent a tweet expressing closeness to the people of Nice. “I pray for the victims, for their families and for the beloved French people, that they may respond to evil with good,” it said.

Cardinal Pietro Parolin, Vatican secretary of state, sent a similar message from Pope Francis in a telegram to Bishop Andr√© Marceau of Nice.

Cardinal Blase J. Cupich of Chicago issued a statement joining Pope Francis in prayer. “Whether such violence occurs in a mosque, synagogue, temple or church, in the United States or elsewhere in the world, it is an attack on everyone who seeks peace and closeness with our Creator,” he said. “Only by reaching out in love and supporting the dignity of our brothers and sisters can we hope to end the evil of hatred that gives rise to such actions. May the Notre Dame Basilica, named for Our Lord’s gentle mother, be a place where forgiveness and healing can begin.”

Other U.S. bishops also reacted as individuals, tweeting out condolences and seeking prayers on social meeting sites. Several, like New York Cardinal Timothy M. Dolan and Bishop Thomas A. Daly of Spokane, Washington, retweeted Pope Francis, saying they joined the Holy Father in prayers for the Catholic community in Nice. The Texas Catholic bishops said they joined the French bishops in prayer and added: “May they (victims) rest in peace, their families and friends be comforted, and the perpetrator be brought to justice.”

For Los Angeles Auxiliary Bishop Robert Barron, the attack seemed more personal. He said he was heartsick because “France was my home many years ago when I completed my doctoral studies.”

“I offer my prayers for the people of France, but especially for those whose lives were lost and for their families and friends who are now overcome with grief,” he said in a Twitter thread. “Please pray for the victims of this terrorist attack and for all Christians who suffer under the threats of persecution and death.”

From Detroit, Archbishop Allen Vigneron tweeted that “Catholics in southeast Michigan hold in prayer our brothers and sisters in faith and all the people of France touched by this tragedy, and first and foremost the victims and their families. We especially ask Our Lady of Sorrows to obtain for them the grace of uniting their sufferings to the cross of Christ, so that even in this hour of darkness the light of his Easter victory will shine forth.”

Bishop Thomas J. Tobin of Providence, Rhode Island, tweeted that the terrorist attack was “horrific, deplorable. We pray for the victims of that attack and for all around the world who are persecuted and suffer for their faith. Our faith is a precious gift; we should never take it for granted.”

Cardinal Gerald Lacroix of Quebec tweeted his solidarity and prayers and noted that, once again, French were struck down by an attack on a place of worship.

In London, Cardinal Vincent Nichols of Westminster said he and other visitors to Nice knew the basilica well.

“Its violation deepens the horror of three brutal killings. May these three innocent people rest in peace. May all people reject utterly the pathway of senseless violence. May God bless Nice,” he said in a statement on the website of the Catholic Bishops’ Conference of England and Wales.

The conference also posted a brief statement from Archbishop Bernard Longley of Birmingham, chairman of the bishops’ Department of Dialogue and Unity, who said he was “horrified by this senseless act of violence.”

“My thoughts and prayers are with the victims and their families and for the French nation as it comes together to mourn the loss of the three people killed in today’s knife attack,” he said. Archbishop Longley referred to the murdered French teacher and also the victims of the 2016 Nice truck attack, which occurred less than half a mile from the basilica.

Cardinal Christoph Schonborn of Vienna tweeted in French and German: “The only answer to blind hatred and violence can only be more love and more solidarity. In the end, the promise of Jesus will prevail: Blessed are those who make peace, for they are called children of God!”

Bishop Marceau responded to the attack by ordering the instant closure of all of the churches in Nice and declaring them to be under police protection.

“All my prayers go out to the victims, their loved ones, the law enforcement agencies on the front lines of this tragedy, priests and faithful wounded in their faith and hope,” said Bishop Marceau. “May Christ’s spirit of forgiveness prevail in the face of these barbaric acts.”

The evening of Oct. 29, Prime Minister Jean Castex was due to meet Bishop √âric de Moulins-Beaufort of Reims, president of the bishops’ conference, and Archbishop Michel Aupetit of Paris to discuss security measures needed to guarantee the safety of Catholics, especially in the run-up to All Saints’ Day Nov. 1.