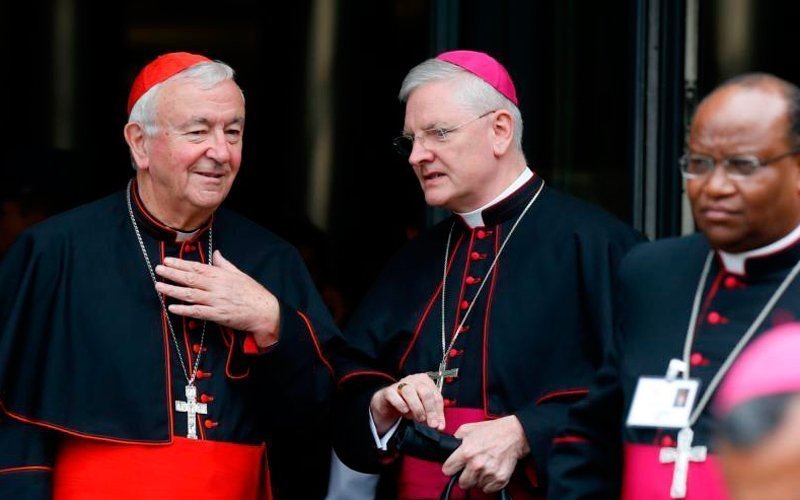 Cardinal Vincent Nichols of Westminster, England, talks with Archbishop Leo Cushley of St. Andrews and Edinburgh, Scotland, as they leave a session of the Synod of Bishops on young people, the faith and vocational discernment at the Vatican Oct. 11. (CNS photo by Paul Haring)

VATICAN CITY (CNS) — Even on the ninth day of the 25-day-long Synod of Bishops on young people, the faith and vocational discernment, two bishops said they already had ideas for things they would want to start in their ministries.

Auxiliary Bishop Robert E. Barron of Los Angeles told reporters Oct. 12 that the presence and input of 34 young adults at the synod has convinced him of the importance of having regular structures for listening to young people and seeking their opinion.

Auxiliary Bishop Everardus de Jong of Roermond, Netherlands, said he was so struck by the personal testimony of Safa al Abbia, a 26-year-old Chaldean Catholic dentist from Iraq, that he vowed to do more in his diocese to raise awareness of and help persecuted Christians. “Global solidarity is part of the faith,” he said.

Both bishops also said the 30 or so women at the synod are being heard and offering important insights, but neither could address the question of why, when two religious brothers are voting members of the synod, no religious sisters are.

Sister Mina Kwon, a member of the Sisters of St. Paul of Chartres from South Korea, who repeated to journalists what she had told the synod — that young people are put off by “inequality and exclusion” — said, “the situation is improving.”

Members of the synod — bishops, observers and experts — began meeting in small groups Oct. 12 to discuss the presentations they had heard in the previous days about spiritual guidance and vocational discernment.

“Entire generations of young people have grown up never seeing their father or mother pray and never having prayed at home,” he told the synod.

Some of the young people said they had attended a divine liturgy in a church, “but they never had seen a priest pray alone or pray with them.”

One place young people have learned to pray, he said, is on pilgrimages or at prayer events organized by the France-based Taize community. With the leader of the community, Brother Alois, present in the synod hall, Archbishop Shevchuk told his fellow bishops that Taize “is becoming a center of prayer for young people on a global level and is forming a youth culture of prayer.”

Cardinal Gerald Lacroix of Quebec reminded the synod, “Our church is full of inspiring models of young people who have left a mark of ‘physical vigor, strength of spirit and courage to risk.’ As Mark Twain would have said, ‘They did it because they did not know it was impossible.'”

The cardinal cited Mary, St. Francis of Assisi and Quebec’s own Sts. Francois de Laval and Marie de l’Incarnation as young adults who left everything behind to follow Jesus.

“We sometimes doubt the ability of our youth to participate actively in the mission of the church,” the cardinal said, but “obviously the Lord does not share our hesitation.”

“Let us be bold in inviting young people to meet Christ and learn to follow him,” the cardinal urged.

Another Canadian, Bishop Stephen Jensen of Prince George, British Columbia, looked at the ingredients that are part of the success many new movements in the Catholic Church have had in bringing young people to Jesus and supporting them in their vocations to marriage, religious life or priesthood.

The methodology, he said, “reflects the ministry of Jesus and the first disciples,” by first calling people into a relationship within a community. “Such friendship becomes the basis for authentic accompaniment, providing a young person mentorship on the journey of responding to the grace of an encounter with Jesus.”

“This companionship makes possible profound communication, providing the security in which a young person can recognize the call to conversion of life as a gift rather than a burden and respond in freedom,” he said. The support helps young people “resist pressures to compromise the Gospel’s teaching” and show them how every aspect of their lives can be transformed by Christ.