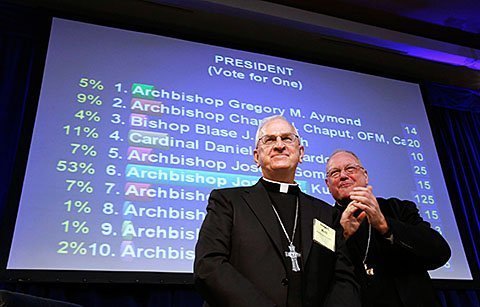 New York Cardinal Timothy M. Dolan applauds the election of Archbishop Joseph E. Kurtz of Louisville, Ky., as the next president of the U.S. Conference of Catholic Bishops Nov. 12 in Baltimore. Archbishop Kurtz will assume the presidency from Cardinal Dolan at the end of the U.S. bishops' annual fall meeting.

BALTIMORE (CNS) — The U.S. Conference of Catholic Bishops has formalized practices regarding the issuing of statements by committee chairmen as well as the conditions under which the chairmen can sign on to statements or letters originating outside of the conference.

The bishops also revised how committees can utilize consultants in their work as spelled out in the "U.S. Conference of Catholic Bishops Handbook."

Both measures passed by overwhelming majorities with a handful of votes opposing the measures or bishops abstaining Nov. 12, the second day of the bishops’ fall general assembly in Baltimore.

He said that the revisions will provide "clarity and guidance" to the chairmen of standing and ad hoc committees, subcommittees and task forces. It is already the practice of chairmen to consult with committee members on such statements, he added.

During a news conference after the vote, Archbishop Joseph E. Kurtz of Louisville, Ky., incoming USCCB president, agreed that the revisions reflect current practice. He said the revisions are not meant to limit the ability of bishops to issues statements or join other faith-based and community leaders in speaking out on fast-breaking public policy measures.

"There needs to be a clarity of message and I don’t think that’s a limit. I think that’s something that the faithful were calling for us to do, on how we show that we are united in our service of others and in our desire to do something carefully," he said.

The revisions only cover times when the normal process for issuing or singing on to a statement cannot be followed because events unfold rapidly or tight time frames are imposed.

One part of the revisions updates the "Regulations Regarding United States Conference of Catholic Bishops Statements and Publications." It allows committee chairmen to issue statements on their own after consulting with committee members and receiving approval from the USCCB president. If a proposed statement is explanatory and restates established policies, teachings or positions already approved by the USCCB or the Vatican, no approval is necessary.

A second revision clarifies that committees can utilize a limited — but unspecified — number of consultants in their work. It also states that USCCB staff can be appointed by the general secretary only to support the work of committees and cannot serve as consultants.

Archbishop Kurtz said the revisions would "make consultation more robust." He said the changes would ensure "there is a very intentional approach to calling forth consultants and even to calling for a variety of consultants" in the future.

Another provision calls for standing committees to meet at least twice a year rather than a single time.