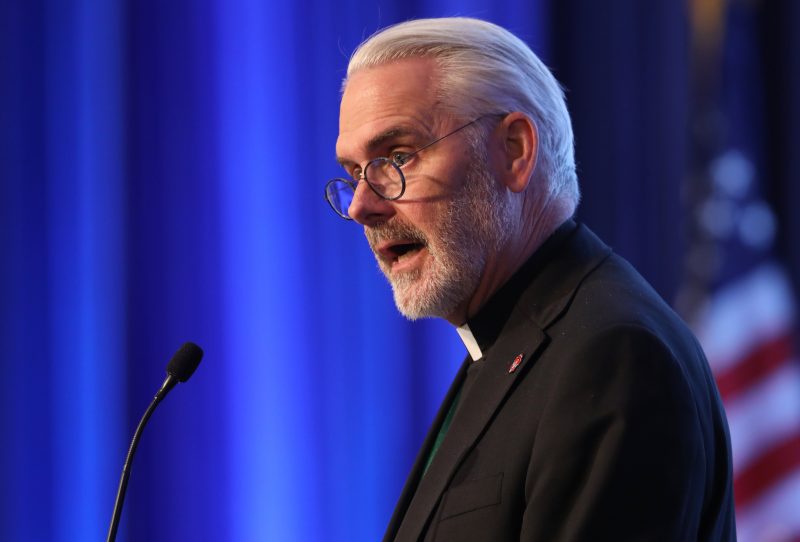 Oklahoma City Archbishop Paul S. Coakley, chairman of the U.S. Conference of Catholic Bishops' Committee on Domestic Justice and Human Development, speaks at a Nov. 16, 2022, session of the fall general assembly of the U.S. bishops in Baltimore. (CNS photo by Bob Roller)

BALTIMORE (CNS) — The U.S. bishops’ quadrennial document on Catholic participation in public life will get a tweaking rather than a wholesale update, but will be supplemented with a new introductory note, parish bulletin inserts, additional social media and video components.

The U.S. Conference of Catholic Bishops overwhelmingly approved the steps Nov. 16 during their fall general assembly in Baltimore with the goal of submitting the document for a wholesale reworking after the 2024 elections.

The document, “Forming Consciences for Faithful Citizenship,” has been issued every four years since it was first adopted in 2007. The bishops have issued the document a year ahead of the presidential election so as not to appear partisan.

The document serves as a guide to the faithful, applying Catholic social teaching to current policies and political concerns facing U.S. society.

The plan for changes in materials to supplement the document was approved by 88.7% of bishops voting on the measure.

Archbishop Paul S. Coakley of Oklahoma City, chairman of the bishops’ Committee on Domestic Justice and Human Development, who presented a series of options for the bishops to consider before the vote, told reporters afterward that the new supplementary materials “will help people realize that it is a document that is applicable to the challenges we’re facing today.”

The specific content of the supplementary materials remains to be determined, Archbishop Coakley said.

He also acknowledged that the USCCB must do a better job of getting the document and related materials into parishes, dioceses and even the wider community.

“We heard and the bishops recognize that not enough people have access to ‘Forming Consciences for Faithful Citizenship,'” he said. “We acknowledge it’s a long document and a teaching document, but we need to digest it perhaps where people can have access to the content of it by other means — video clips, social media. I don’t know what it is. We’ll try to be creative.”

“We want people to have more access to the teaching that it contains,” he added.

As for the content, the archbishop expressed that it is expected to reflect the teachings of the nearly decadelong tenure of Pope Francis.

“It’s a rich pontificate already that offers us plenty to lay out for people and to use that will help them inform their consciences and erase division,” he said.

In introducing the document prior to the vote, Archbishop Coakley said the bishops had privately discussed four options related to the document that could be considered.

However, those discussions as they convened beginning Nov. 14 led to a fifth option, incorporating parts of those four options, and it eventually gained wide support, he said.

During a short discussion about the proposals, some bishops expressed concern the document is outdated because it does not include the teaching of Pope Francis, who was elected in 2013.

“I’m not really sure how we can do justice to just revising and updating, considering we have a different pope who has given us specific encyclical in teaching on the political order and a new kind of politics calling the whole world to revision what politics is all about,” he told the assembly.

At the very least, Bishop Stowe and others said, the document must be supplemented with materials that reflect that teaching.

Similarly, Cardinal Robert W. McElroy of San Diego urged that any new materials that will eventually be developed devote “great attention to the crisis of democracy that we’ve been experiencing.”

Citing the violence that erupted at the U.S. Capitol Jan. 6, 2021, as Congress prepared to certify the election of President Joe Biden, he said Catholics are concerned that democracy is in danger.

“Our people are uneasy about this and we must speak to this question in a nonpartisan way, in an elevating way, in a way that comes from our tradition,” Cardinal McElroy said.

Several bishops said the time to begin thinking about the content of a new “Faithful Citizenship” document is now and that work should begin immediately after the 2024 presidential election.

The bishops will consider the new components of “Faithful Citizenship” at their fall general assembly next November with specific supplemental materials to be developed, followed by distribution of those materials throughout 2024.

Tags: Election News, USCCB
Copyright © 2022 Catholic News Service, Inc. All rights reserved. Linking is encouraged, but republishing or redistributing, including by framing or similar means, without the publisher's prior written permission is prohibited.