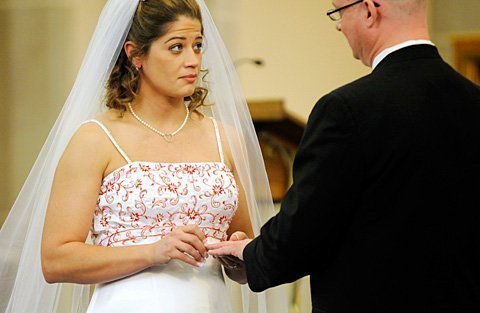 Lisa Coia and Alan Bubel exchange rings during their 2008 wedding Mass at Our Mother of Sorrows Church, Greece.

Information about Catholic dating websites. Wedding-planning tips and guidelines. Suggestions for how to survive the first year of parenthood and how to take young children to Mass.

A blog written by a newly married couple, and another by a couple with three children. Information about caring for aging parents while also caring for children. Daily tips intended to help couples keep their marriages strong.

These are just a few of the many resources that can be found at www.ForYourMarriage.org, which the U.S. Conference of Catholic Bishops maintains as a one-stop website for Catholics interested in dating or marriage.

"There’s always new stuff there. It’s a very user-friendly website and has current, up-to-date information about marriage in general, and … what the Catholic church believes about marriage," noted Mary Dundas, the Diocese of Rochester’s coordinator of evangelization and sacramental catechesis.

The bishops launched the site in 2007 in response to some troubling statistics about the state of marriage — and especially Catholic marriage — in the United States.

The number of marriages celebrated in the Catholic Church in America has dropped nearly 60 percent in the last four decades, according to a June 2011 analysis of the state of Catholic marriage by Mark M. Gray, research associate at the Center for Applied Research in the Apostolate (CARA) at Georgetown University. In a June 2011 article in Our Sunday Visitor, Gray noted that just 168,400 marriages were celebrated in the U.S. Catholic Church in 2010. By contrast, there were 415,487 marriages celebrated in the U.S. Catholic church in 1972, and in the intervening years the Catholic population in this country has grown by almost 17 million, Gray wrote.

What’s more, Gray, who is director of Catholic polls for CARA, found that the rate of marriages celebrated in the Catholic Church had declined by more than had the overall rate of marriages celebrated in this country. In 2009, the most recent year for which data was available, the nation’s overall marriage rate was 6.8 marriages per 1,000 people, but among Catholics the rate was just 2.6 marriages per thousand in 2010, according to Gray’s analysis.

This stark finding probably didn’t come as a shock to the nation’s Catholic bishops, however. By 2004 they’d recognized that declining marriage rates — coupled with high divorce rates and increasing numbers of couples choosing to live together before marriage — signaled a need for a renewed effort to strengthen Catholic marriage.

In November of that year the bishops voted to make marriage a priority, and shortly thereafter they launched the National Pastoral Initiative for Marriage, through which they strove to call attention to the meaning and value of married life for the church and for society in general.

The bishops undertook a variety of new initiatives in order to achieve that goal. One was the publication of "Love and Life In the Divine Plan." In this November 2009 pastoral letter on marriage, the bishops emphasized the church’s teachings about marriage being a natural gift, a sacrament and a public commitment between a man and a woman. They also addressed the church’s response to several contemporary challenges to the institution of marriage.

The bishops’ efforts also included a 2007 nationwide advertising campaign in support of marriage, said Sheila Garcia, associate director of the USCCB’s Secretariat of Laity, Marriage, Family Life and Youth. The USCCB produced several public-service announcements based on the theme "What Have You Done For Your Marriage Today?" The spots featured real people answering this question in man-on-the-street interviews, and the ads were broadcast on radio and television stations throughout the country, Garcia said.

"They were very well done. People really enjoyed those," she added.

For additional information on strong marriages, the public-service announcements also referred viewers to the For Your Marriage website, which was launched in June 2007, Garcia said. A second public-service campaign, launched in 2011, focused on the positive "ripple effects" of marriage and also referred people to the website, noted Patricia Ryan Garcia, assistant director in the USCCB’s Communications Office. These advertisements explored the ways a good marriage benefits the entire community, not just the married couple, she added.

"If you put both of the campaigns together, we had about 151,000 TV broadcast spots and 374,000 radio broadcast spots. The total advertising value has been about $20 million. That’s the kind of money we wouldn’t have had. Broadcasters have been very generous" in airing the ads, Ryan Garcia said.

The public-service campaign drove quite a bit of traffic to the For Your Marriage website, which as of the end of March 2013 had been visited more than 31 million times by more than 2 million unique visitors, Ryan Garcia said. The average visit lasted more than three minutes, so people appear to be reading the material offered on the site, she noted.

"It’s been a steady growth," she said.

For Your Marriage is a clearinghouse of information about Catholic marriage in particular, but also marriage in general, Ryan Garcia said.

"The idea is to have a place where folks can go to get valuable, legitimate information on how to keep their marriage strong, with a Catholic sensibility to it," she said. "It’s a way of showing the church cares about marriages; all marriages, not just our own folks."

The USCCB has received a lot of positive feedback from people who are pleased with the website’s content, Garcia added. One of the more popular features is the daily marriage tip, which is a bite-sized bit of practical information for married couples. People can subscribe to and receive these tips automatically, she said. The tip for May 28, for example, suggested that spouses make a conscious effort to remind themselves that they’re a team by using the word "our" instead of "my" when referring to their homes, money or kids.

"A lot of people are following the little tips, and our section on Catholic wedding planning is of major interest to people," Garcia said.

This section features such resources as a listing of all of the Scripture selections that may be used as readings in a Catholic ceremony and a brief commentary about each selection; a description of various traditional wedding elements that are or are not appropriate to a Catholic ceremony; various acceptable ways to personalize a Catholic wedding ceremony; church teachings about marriage; and tips to help couples budget for their weddings.

"It’s kind of catechetical in a sense. We’re kind of explaining to people that marriage is a sacrament and why we do what we do," Ryan Garcia said.

"It’s really a nuts and bolts kind of guide to planning your wedding," Garcia added, noting that diocesan marriage-preparation staffs throughout the nation use the website as a resource when working with engaged couples. The Diocese of Rochester includes a link to For Your Marriage on its online listing of marriage-preparation resources, and also links to the site from its Households of Faith: Homelinks website for families.

In each of the past few months For Your Marriage has featured a different married saint, and the site also includes timely articles of interest to couples in all stages of marriage or who are dating. The two couples who blog for the site update their blogs each week, Ryan Garcia added, noting that it’s interesting to read about the ways the couples grow and respond to the challenges of being married and being parents.

The blogging couples don’t look at life through pious rose-colored glasses, Dundas observed, but also aren’t afraid to show their readers how they live out their faith and their vocations every day, even when it’s difficult. She said she’s glad the For Your Marriage website celebrates marriage and couples who keep their faith as the foundation of their lives and their vocations.

"It’s showing that it’s wonderful that you can turn to your faith when you’re dealing with the relationship of marriage, which can be a difficult journey if you aren’t using good resources," Dundas said.