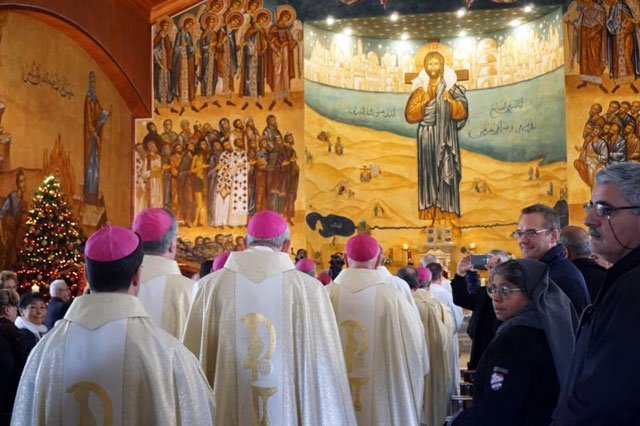 Bishops from North America, Europe and South Africa process into the Church of the Good Shepherd for a Jan. 11 Mass on the grounds of the Our Lady of Peace Center on the outskirts of Amman, Jordan. The Mass was held in solidarity with scores of Iraqi Christian refugees displaced by Islamic State militants, to let them know that they are not forgotten.
By Dale Gavlak
Catholic News Service
AMMAN, Jordan (CNS) — With crises in Syria and Iraq deepening, Catholic bishops on a solidarity visit with the "forgotten" Christians of the Middle East are urging stepped-up peace efforts to resolve conflicts tearing apart the troubled region.
Highlighting the ongoing plight of Iraqi Christian refugees who face another winter of displacement, 18 months after fleeing persecution by Islamic State militants, is also their top concern.
"They want a future which is full of peace," Bishop Declan Lang of Bristol, England, said of the Iraqi Christians who attended a packed, solemn Mass at Our Lady of Peace Center on the hilly, tree-lined outskirts of the Jordanian capital.
"These people are of tremendous faith, and that’s where they find their identity. What we are trying to say to them is that you are not forgotten," Bishop Lang told Catholic News Service.
Bishop Lang has been leading 12 bishops from Europe, South Africa and North America on the third and final leg of a pilgrimage to encourage
Christians in the Holy Land. Known as the Holy Land Coordination, the annual event was set up at the invitation of the Holy See at the end of the last century to offer support to local Christian communities of the Holy Land.
The bishops earlier traveled to the Gaza Strip and the West Bank to encourage a Palestinian Christian population increasingly dwindling in the land of Jesus’ birth.
But the bishops told Catholic News Service that it also was important to hear from Iraqi Christians and other refugees, so the wider Christian community can effectively help them.
"It’s important that we remind our governments and the general population of the situation of Iraqi Christians," Bishop Lang said of the some 8,000
Iraqi Christians currently sheltering in neighboring Jordan.
They fled their ancient homeland of more than 14 centuries after Islamic State militants told them to convert to Islam, be killed or leave. Tens of thousands are internally displaced in northern Iraq.
"So one of the responsibilities and obligations that we have is to keep reminding people of the stress and distress of the Iraqi refugees," Bishop Lang said.
One Iraqi Christian, identified only as Bashar, said after the Mass, "My family and I sadly feel that we can never go back to our home in Mosul." A mechanical engineer, the man had once owned his own telecom company in Iraq’s second-biggest city, which is currently in the hands of Islamic State.
"The military didn’t protect us, and our Muslim neighbors betrayed us, even robbing us of our personal possessions. So we believe that the only future for us is somewhere in the West," said the man, who now shelters with his family of four at the center’s compound because he has lost his savings.
Bishop Lionel Gendron of St. Jean-Longueuil, Quebec, told CNS that one of the first things he plans to do is talk to the new Canadian government about the issue of opening more resettlement opportunities to Iraqi Christians.
"I will insist on the fact. Iraqis are practically not allowed to go back to their country," the Canadian bishop said. "Many Syrians left (their country) because of the war and the political situation, while the Iraqis left mainly because of their faith."
Bishop Oscar Cantu of Las Cruces, New Mexico, told CNS that "the time for peace is now."
While praising the work of the international Catholic charity, Caritas, which aids more than 1 million Syrian and Iraqi refugees and the other humanitarian efforts in Jordan, he called them "a band-aid."
"It’s not sustainable in the long run," said Bishop Cantu, who serves as chairman of the U.S. bishops’ Committee on International Justice and Peace.
"We have to look at the root causes of these issues. It’s in everyone’s interest to build peace, so we will certainly be advocating for that as we return."
"It’s also important that the U.S. take in its fair share of refugees," Bishop Cantu said of the increasingly divisive issue in the United States.
Stephen Colecchi, director of the U.S. Conference of Catholic Bishops’ Office of International Justice and Peace, accompanied Bishop Cantu on the visit. He said the office’s work on behalf of "all the peoples of the Middle East" has involved supporting a resolution in Congress declaring that Iraqi
Christians and Yezidis have suffered genocide at the hands of Islamic State militants. He said his office also has worked to encourage the U.S. to accept its "fair share of refugees" and "invest in more resources for countries, like Jordan, to cope with the refugee influx, so they are not destabilized."
Colecchi emphasized the need for active international peace efforts that recognize the rights of religious minorities in the Middle East.
"We’ve got to work for peace and ultimately stop the atrocities of Islamic State and the flow of refugees," he said.
"A more united and effective response is needed to that kind of extremism from which Muslims are suffering and particularly, Christians and Yezidis, are targeted by," Colecchi added.
Among the other bishops who took part in the Holy Land Coordination were Bishop Stephen Brislin of Cape Town, South Africa; Auxiliary Bishop
William Kenney of Birmingham, England; Bishop John McAreavey of Dromore, Ireland; and Bishop William Nolan of Galloway, Scotland.
Copyright © 2023 Catholic News Service, Inc. All rights reserved. Linking is encouraged, but republishing or redistributing, including by framing or similar means, without the publisher's prior written permission is prohibited.