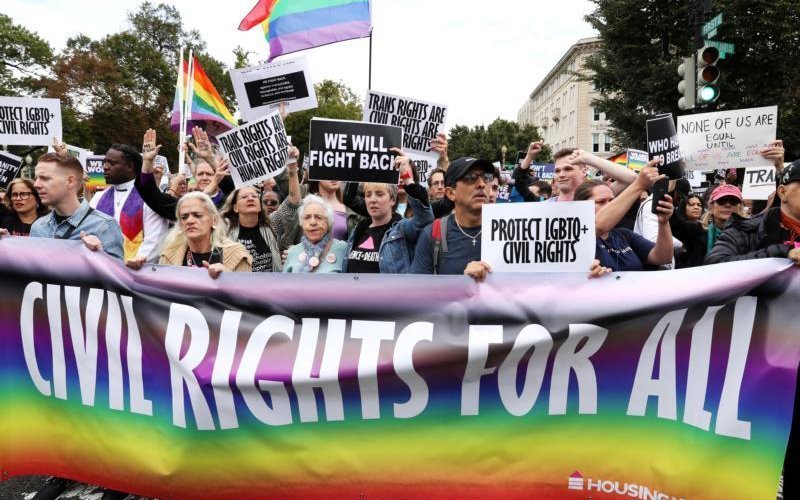 Activists and supporters block the street outside the U.S. Supreme Court in Washington Oct. 8, 2019, as it hears arguments in three major employment discrimination cases on whether federal civil rights law prohibiting workplace discrimination on the "basis of sex" covers gay and transgender employees. (CNS photo by Jonathan Ernst/Reuters)

WASHINGTON (CNS) — The chairmen of three U.S. bishops’ committees have urged the U.S. Supreme Court not to redefine “sex” in civil rights law, arguing this would change the definition of “a fundamental element of humanity that is the basis of the family and would threaten religious liberty.”

Redefining “sex” in the law would be “an interpretive leap away from the language and intent” of Title VII of the Civil Rights Act of 1964, they said.

The bishops’ statement was issued Oct. 8, the same day the high court heard oral arguments in a trio of cases on the question of whether U.S. law prohibiting employment discrimination based on “sex” in Title VII includes “sexual orientation” and “gender identity” discrimination, respectively.

“Today the U.S. Supreme Court heard oral arguments regarding the meaning of the word ‘sex’ in federal law,” the bishops said. “Words matter; and ‘sex’ should not be redefined to include sexual inclinations or conduct, nor to promulgate the view that sexual identity is solely a social construct rather than a natural or biological fact.”

One hour of oral arguments dealt with two of the cases, Bostock v. Clayton County, Georgia, and Altitude Express v. Zarda, which were consolidated because both claim discrimination based on sexual orientation. Another hour of arguments focused on the third, R.G. & G.R. Harris Funeral Homes v. Equal Opportunity Employment Commission, which questions whether Title VII’s protections apply to transgender employees.

“Bostock” in the first case is Gerald Bostock, who worked for Clayton County as a coordinator of child welfare services. “Bostock argued that after the county learned that he was gay, it falsely accused him of mismanaging public money so that it could fire him — when it was in fact firing him because he was gay,” wrote Amy Howe in an overview of the three cases for scotusblog.com.

Altitude Express is a New York skydiving company that petitioned the court for a review of its case. The company was sued in federal court by Donald Zarda, who claimed he was fired as an instructor because he is gay and argued this was a violation of Title VII’s prohibition of discrimination because of sex.

A trial court threw out Zarda’s suit, but on appeal, the full 2nd U.S. Circuit Court of Appeals, based in New York, sided with the fired employee. The appeals court said in its ruling that Title VII applies in his case because discrimination based on sexual orientation “is a subset of sex discrimination.”

Thomas Rost, owner of a funeral home in Michigan, was sued by the federal Equal Employment Opportunity Commission after he fired a worker identified in employment records as a man when the employee was hired in 2007 but who six years later identified as a woman and wanted to wear women’s clothes. The EEOC sued on behalf of the employee, identified as Aimee Stephens.

Rost asked the Supreme Court to review the case after the 6th U.S. Circuit Court of Appeals, in Cincinnati, ruled in favor of the EEOC and Stephens.

“The Supreme Court affirmed that sex is an ‘immutable characteristic’ in the course of establishing constitutional protections for women against sex discrimination in the 1970s,” the U.S. bishops’ committee chairmen said in their Oct. 8 statement. “Such protection is no less essential today. Title VII helps ensure the dignified treatment of all persons, and we as Catholics both share and work toward that goal.”

The USCCB filed friend-of-the-court briefs in the cases Aug. 23.

“By forbidding workplace discrimination based on sex, Congress intended to level the playing field between men and women,” the briefs say. “Differential treatment based on ‘sexual orientation,’ however, does not expose women to disadvantageous terms or conditions to which men are not exposed (or vice versa). Therefore, it is not sex discrimination.”

They add: “Construing the term ‘sex’ to include ‘sexual orientation’ will create conflicts with many religious believers and with their institutions. Such an interpretation will affect the ability of churches and faith-based schools and charities to hire and retain employees who, by word and conduct, accept or at least do not contradict the organization’s religious message.”

Among other friend-of-the-court briefs supporting the employers in these three cases was one filed by the Council for Christian Colleges and Universities, The Catholic University of America, Brigham Young University, and 39 other religious colleges and universities.

At Franciscan University of Steubenville, Ohio, one of the schools that joined in this brief, Franciscan Father Dave Pivonka, university president, said in a statement the school “proudly joined” in the brief “to help the high court understand how a new interpretation of the word ‘sex’ in nondiscrimination law will violate religious freedom and put women at risk.”

If ‘sex’ is conflated with ‘gender identity,’ universities like Franciscan may no longer be able to maintain sex-specific sleeping facilities, bathrooms and locker rooms,” he said. “Our medical facilities could be compelled to provide religiously objectionable medical procedures, and biological men would be in competition with women for athletic roster spots and scholarships.”