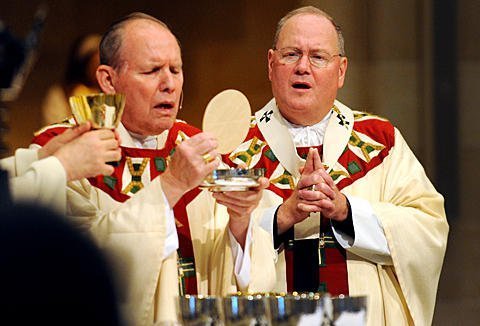 Political campaigns are heating up as Election Day draws near, and New York’s eight bishops recently urged Catholic voters to bring their faith with them when they enter the voting booths Nov. 2.

Catholics have an obligation to vote, and to cast their votes after carefully viewing the candidates and issues through the lens of their Catholic faith, the bishops wrote in a statement titled "Our Cherished Right, Our Solemn Duty." Bishop Matthew H. Clark, Archbishop Timothy M. Dolan and the state’s other six bishops issued the statement Oct. 8 through the New York State Catholic Conference, the bishops’ public-policy arm. The bishops also provided a list of questions to use when evaluating political candidates and their views on specific issues.

Catholics are free to join any political parties they choose, yet their votes must not be cast based purely on party loyalty or self-interest, the bishops wrote. Rather, they should consider Jesus’ teachings in the Gospels and the teachings of the Catholic Church when evaluating candidates and their stances on various issues facing the state and the nation. Elected officials have great influence in such important matters as the right to life, issues of war and peace, the education of children, and the treatment of the poor and vulnerable, according to the bishops’ statement.

"Unfortunately, it is the rare candidate who will agree with the Church on every issue," the bishops wrote in the statement, which may be found on the New York State Catholic Conference website.

However, certain moral issues have more gravity than others, the bishops continued, referencing the U.S. Conference of Catholic Bishops’ "Forming Consciences for Faithful Citizenship," which also is intended to help Catholic voters.

"The inalienable right to life of every innocent human person outweighs other concerns where Catholics may use prudential judgment, such as how best to meet the needs of the poor or to increase access to health care for all. The right to life is the right through which all others flow," New York’s bishops wrote.

Thus, politicians who support abortion, euthanasia or embryonic stem-cell research should not be considered acceptable for public office, according to the New York bishops’ statement. Furthermore, "those who knowingly, willingly and directly support public policies or legislation that undermine fundamental moral principles are cooperating with evil," according to the U.S. bishops’ "Faithful Citizenship" document.

The state’s bishops acknowledge that evaluating political candidates is not an easy task for Catholics to undertake, particularly in today’s complex times. It can be difficult, they said, for voters to obtain the voting records of incumbent politicians and determine the positions of new challengers.

"The task of doing due diligence can be truly challenging," the New York bishops wrote. "Yet our state is facing many critical issues which are of vital concern to faithful Catholics. Thus it is absolutely necessary for good citizens to take a careful look at every candidate and to vote accordingly for better candidates."

To aid voters in their quest for information, the New York State Catholic Conference has published on its website a list of all of the state’s candidates for elected office. The bishops also included in their statement a number of questions about various critical issues. They urge Catholics to find out how each candidate would answer those questions and where they stand on these critical issues. The questions cover such topics as the right to life, parental rights in education, the protection of marriage, immigration reform and access to health care.

"This list is by no means exhaustive, but our hope is that it serves as a valuable tool in forming your consciences as you make your decisions in the voting booth as Catholic faithful citizens," the bishops wrote. "While we as the bishops of New York state cannot and do not endorse candidates for office, we encourage you to properly form your conscience by reflecting on the moral and social teachings of your church and we strongly urge you to vote on Election Day. For when you vote, you are exercising your cherished right and your solemn duty as Americans and as Catholics."