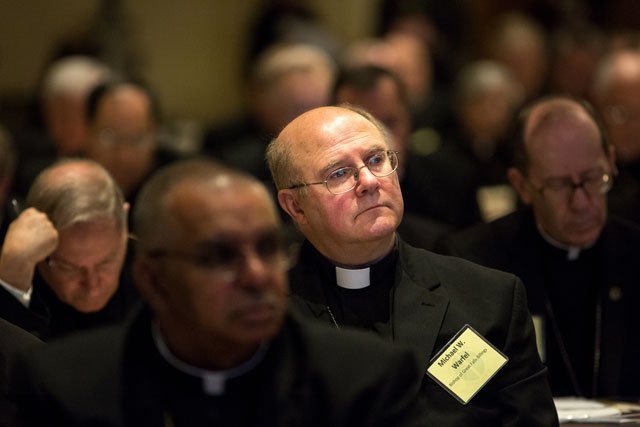 ST. LOUIS (CNS) — A week before the anticipated release of Pope Francis’ encyclical on human ecology and the environment, the U.S. bishops were urged to help Catholics hear and understand it.

Pope Francis will challenge the assumptions of "both the left and the right" with the document, said Bishop Oscar Cantu of Las Cruces, New Mexico, chairman of the U.S. bishops’ Committee on International Justice and Peace.

He made the comments June 10 on the first day of the bishops’ spring general assembly in St. Louis.

Miami Archbishop Thomas G. Wenski pointed out that even though Bishop Cantu had not been given advance copies of the encyclical, which has generated a fair amount of comment even before its June 18, church officials have a pretty good sense of what it will be about based on Scripture passages, papal teachings and previous words of Pope Francis.

Archbishop Wenski, chairman of the U.S. bishops’ Committee on Domestic Justice and Human Development, said the document will very likely highlight climate change as "a moral issue," pointing out that the poor suffer the most from consequences of improper care of the environment, even though "they have contributed least to climate change."

He noted that Pope Francis is not speaking out as a scientist or a politician on the issue but as a shepherd.

The archbishop also noted that the U.S. bishops "aren’t novices" on this topic either, since they issued a statement on the environment in 1991 and a climate change statement in 2001.

He said for the past two years, the pope has been "challenging us to resist the throwaway culture and build a culture of solidarity an encounter. He will surely continue to ask the world to abandon practices that casually discard both people and the gifts of the earth."

We can’t "opt out" of conversation on caring for the environment, he told the bishops.

The encyclical is titled "’Laudato Si’: On the Care of Our Common Home," which translates "praised be," the first words of St. Francis’ "Canticle of the Creatures."

Bishop Cantu said it also would have international implications, particularly regarding solidarity with the world’s poor.

He told reporters during an afternoon news conference that the pope’s encyclical should not be compared to "hints from Heloise" but will have strong weight for Catholics to pay attention to and follow. It will "require prayerful attentiveness," he added.

To that end, the USCCB will be providing homily hints, bulletin inserts and other materials for Catholic schools and parishes.

The encyclical, Bishop Cantu said, will "call all of us to a wider vision, a global vision, to the globalization of solidarity. He will help us lead our people to a greater appreciation of the link between the welfare of their families and wise national global policies."

"His teaching could help us rise above parochial interests and embrace what is in everyone’s best interests, the common good of the human family," he added.