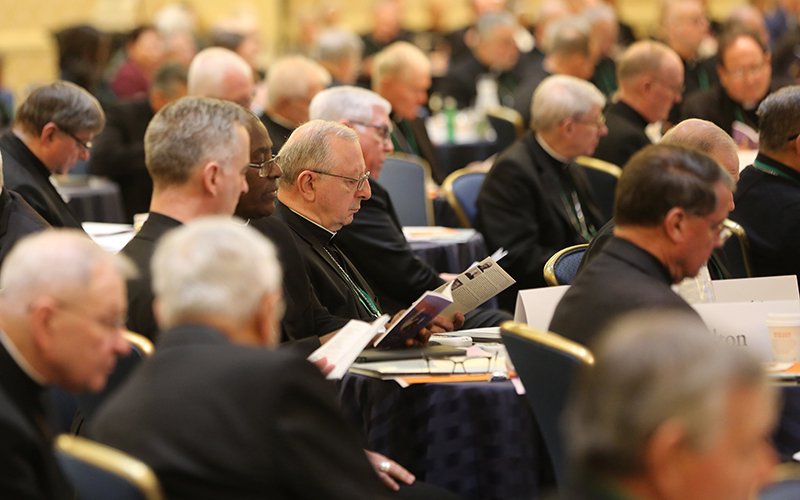 Bishops attend a Nov. 15, 2022, session of the fall general assembly of the U.S. Conference of Catholic Bishops in Baltimore. (CNS photo by Bob Roller)

BALTIMORE (CNS) — The U.S. bishops Nov. 15 were urged to remain focused on the church’s missionary role of spreading the Gospel message and to know that despite a growing secularism in the U.S., “the vast majority of our neighbors still believe in God.”

Gathered in Baltimore, the bishops heard these remarks during the afternoon public session of their annual fall general assembly, respectively, from Archbishop Christophe Pierre, the papal nuncio, and Archbishop José H. Gomez of Los Angeles, the outgoing president of the U.S. Conference of Catholic Bishops.

The day’s agenda included elections for new leadership of the U.S. Conference of Catholic Bishops; an overview of the pro-life landscape in the U.S. after Dobbs; reports on the process of listening and discernment among church members for the world Synod of Bishops on synodality; and a presentation on liturgical items to be voted on Nov. 16.

The day ended with poignant remarks from Mark Williams, a survivor of sexual abuse by a Catholic priest, who told the bishops he was “grateful and encouraged by the work you are doing to rid abuse from our beloved church.”

Archbishop Pierre told the bishops that “as we live through a time of accelerated change,” spreading the Gospel message is particularly important.

One way to determine if the church is following its missionary role is to look at how local churches are functioning as evangelizing communities, something he said is especially evident in the current eucharistic revival in the United States.

The nuncio also reminded the bishops of the need for the church to reflect the image of a field hospital, a description used by Pope Francis, who said the church must be about the work of healing those who are wounded.

He said the church lives this work out in its outreach to immigrants and to young mothers in the “Walking with Moms in Need” initiative.

In his final address as USCCB president, Archbishop Gomez described images of conflict, changes and challenges he saw during his three-year term.

He spoke of the pandemic, “a long season of unrest in our cities,” a contentious presidential election as well as “deepening political, economic and cultural divisions,” war in Europe, a refugee crisis and “the overturning of Roe v. Wade.”

“We’ve been through a lot of changes together,” Archbishop Gomez told his brother bishops.

He raised alarm over what he saw as a U.S. society moving “hard and fast toward an uncompromising secularism,” adding that “traditional norms and values are being tested like never before.”

He said he has heard concerns from “young mothers and fathers who are trying to raise their children to know Jesus in a difficult culture.”

The challenge for those ministering in this moment, he said, “is how to maintain some kind of perspective” in a “noisy, distracted media culture.”

Challenges also signal “a new opening for the Gospel,” a calling “to step up and to open every door for Jesus Christ, to shine his light into every area of our culture and society; to bring every heart to a new encounter with the living God.”

“It is not inevitable that our country will fall into secularism. The vast majority of our neighbors still believe in God,” Archbishop Gomez added. “Tens upon tens of millions of Catholics still serve God every day, and we are making a beautiful difference in the life of this country.

“Our Catholic people are teachers and healers, seekers of justice and peace.”

In their elections, the bishops chose Archbishop Gomez’s successor — Archbishop Timothy P. Broglio of the U.S. Archdiocese for the Military Services. He was elected from a slate of 10 nominees, winning with 138 votes.

In subsequent voting, Archbishop William E. Lori of Baltimore was elected USCCB vice president. He won the post on the third ballot by 143-96 in a runoff with Bishop Kevin C. Rhoades of Fort Wayne-South Bend, Indiana.

As outgoing chairman of the USCCB Committee on Pro-Life Activities, Archbishop Lori spoke to the bishops about the challenges for the church following both the Supreme Court’s Dobbs decision which overturned Roe v. Wade and the many state referendums that passed in the midterm elections that either approved abortion protections or approved abortion restrictions.

The archbishop said the church, in this environment, has its work cut out for it and should not only reinforce its teaching on life issues for its members but also speak out clearly as a witness in society insisting that all people be cared for, born and unborn.

At the close of their public session, the bishops were reminded of the work accomplished, and that still continues, in efforts to provide a safe environment and healing 20 years after the church adopted the “Charter for the Protection of Children and Young People” in response to the clergy abuse scandal.