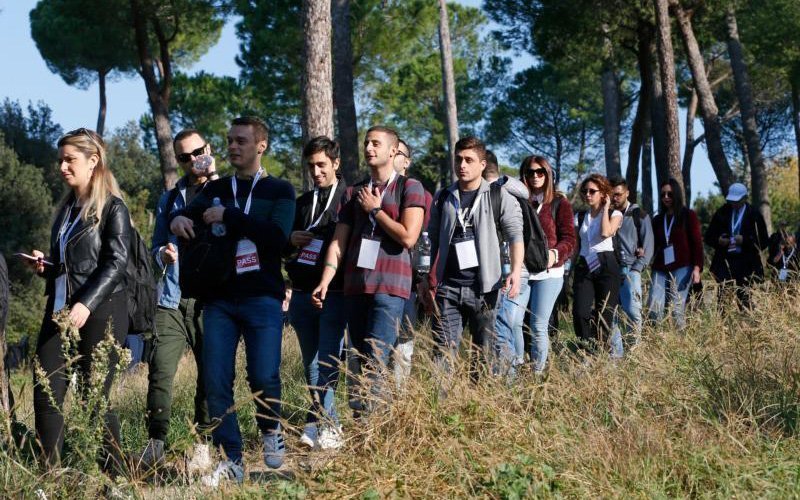 Young people participate in a pilgrimage hike from the Monte Mario nature reserve in Rome to St. Peter's Basilica at the Vatican Oct. 25. Participants in the Synod of Bishops on young people, the faith and vocational discernment, and young people from Rome parishes took part in the hike. (CNS photo by Paul Haring)

VATICAN CITY (CNS) — Following the Francigena Way, an ancient pilgrims’ path, a group of about 300 synod participants and young people from Rome parishes headed to St. Peter’s Basilica to pray at the apostle’s tomb.

The wayfaring cardinals, bishops, priests and young people were stocked with small backpacks, shod with comfortable sneakers or hiking boots, and readied with hats and water bottles to walk 3.7 miles (6 km) from an urban nature preserve to Christianity’s largest church.

Sponsored by the Pontifical Council for Promoting New Evangelization, the pilgrimage was held Oct. 25 as part of the Synod of Bishops on young people, faith and vocational discernment.

The walk gave participants opportunities to stop for prayer and for photos, but even more, according to the pilgrimage booklet, it offered a way to experience the itinerant condition of the church, which is the people of God journeying on their way to heavenly Jerusalem.

The Synod of Bishops, too, it said, “is a sign of a journey that the community of believers wants to accomplish as a response to God’s call” to listen to his Word more closely, to renew one’s heart and profess the faith in a more “committed and responsible” way.

Pope Francis met the group of pilgrims after they streamed into St. Peter’s Basilica and he led them in a profession of the faith above the tomb of the apostle, who with his life and martyrdom, gave witness to the faith.

The pope then remained for the Mass celebrated by Cardinal Lorenzo Baldisseri, general secretary of the Synod of Bishops.

Archbishop Rino Fisichella, head of the council for new evangelization, gave the homily and described how St. Peter’s life and vocation started with the great trust he put in Jesus’ word and the miracles that trust would reap.

However, Peter was never quite ready to give up everything for the Lord — who was always patient and loved him all the same, the archbishop said.

It took 30 more years, he said, before the apostle was ready to do more than just follow Christ by giving up everything, including his own life, for God.

“Here Peter fulfills his vocation. It takes 30 years. It doesn’t matter. God is patient with us,” the archbishop said. “He has to find an open heart.”