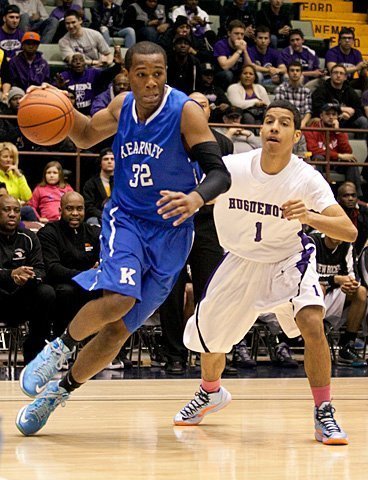 Bishop Kearney's Alvin English blows past New Rochelle's Donny Powell on his way to the basket.

Both teams go by the nickname of Kings, but right now they reign as the basketball kings and queens of New York state.

Double royalty is the rule at Bishop Kearney High School, where the boys’ and girls’ teams earned unlikely dual state championships March 17. How unlikely? They went into their own sectional tournaments as a No. 7 and a No. 8 seed, respectively.

Even so, the BK boys earned the NYSPHSAA state crown with a 45-39 victory over New Rochelle at Glens Falls Civic Center. Kearney, with a record of 17-7, now advances to the state Federation final four this coming weekend.

Meanwhile, the Kearney girls captured their first-ever state crown by winning 54-44 over Harpursville in the Class C final played at Hudson Valley Community College. Their final record was 19-8.

Kearney held a 29-18 advantage at halftime and withstood a second-half rally that saw the Huguenots of Section 1 draw to within three points. Thomas Bryant was named tournament Most Valuable Player after finishing with 15 points, 11 rebounds and four blocks. Antwoine Anderson had 14 points and Chinonso Obokoh, who is headed to Syracuse University next year, contributed 13 rebounds and eight blocks.

The Kings had earned their way into the final with a 65-58 overtime win over Troy of Section 2 one day earlier. Anderson pumped in 25 points and Bryant had 21 as Kearney held a 12-5 scoring edge in OT.

BK had reached the state final four with a 53-41 win over Jamestown of Section 6 in quarterfinal play March 8 as Obokoh had 12 points and 19 rebounds and Bryant had 12 points, 13 boards and six blocks. That was preceded by a 63-51 decision over Greece Athena in the state qualifier March 6 as Anderson totaled 19 points and Bryant added 18.

Previously, Kearney captured the Section 5 Class AA1 title despite being a No. 7 seed. The Kings won 58-55 over top-seeded Webster Schroeder in the title game March 3 behind Anderson’s 20 points as BK erased a four-point deficit entering the final quarter. BK earlier won 74-46 over No. 10 Gates-Chili in pre-quarterfinal play Feb. 19 as Bryant had 19 points; 47-43 over No. 2 Fairport in a Feb. 22 quarterfinal as Anderson led with 15; and 46-38 over No. 6 Rush-Henrietta in a Feb. 28 semifinal with Bryant totaling 18.

This marks the Kings’ second state title. They also won the Class B crown in 2009.

Kearney’s girls faced a 21-20 halftime deficit against the Hornets of Section 4. But the Kings dominated thereafter as tourney MVP Skyler Gausney-Jones finished with 23 points and Kharysma Bryant added 14. In addition, the lanky Kings got 14 rebounds from Emmanuella Edoka and 11 from Princella McCullough. Since there is no Federation tournament at the girls’ Class C level, BK’s historic season is now completed.

BK had reached the final thanks to a 56-41 semifinal win March 16 over AuSable Valley of Section 7. Gausney-Jones had 23 points, along with 14 from Edoka and 13 from Bryant, as the Kings scored 19 of the game’s final 21 points.

In the state quarterfinal against Randolph of Section 6, played March 8, Kearney scored a 64-48 win as Gausney-Jones and Bryant had 16 points each and McCullough added 15. That victory followed a 50-45 decision over Keshequa in state-qualifying play March 5 as Gausney-Jones got 18 points.

Kearney had begun the post-season as a mere No. 8 seed in the Section 5 Class C-2 playoffs, but earned the title with a 51-38 win over No. 2 Lyons in the Feb. 27 title game as Gausney-Jones scored 26 points and BK pulled away from a 20-20 halftime tie.

Earlier in sectionals, BK won 41-27 over No. 9 Caledonia-Mumford in first-round play Feb. 16, allowing just three points in the second and third quarters combined; 53-29 over No. 1 Perry in the quarterfinals Feb. 20 as Gausney-Jones and McCullough each had 15 points; and 51-48 over No. 4 Red Jacket in the semifinals Feb. 23 as McCullough had 14 points and Gausney-Jones scored the go-ahead basket with :48 remaining.