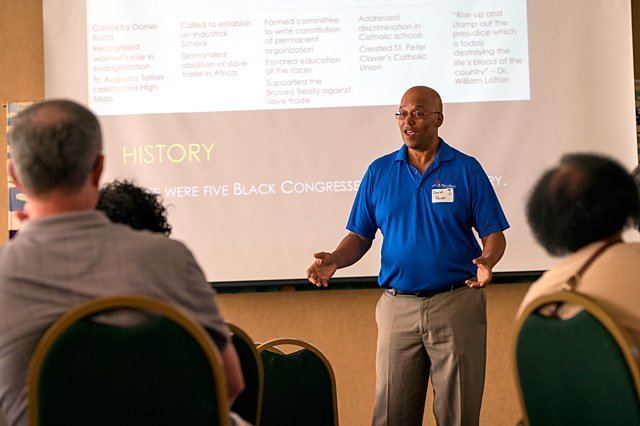 David Powe speaks on the history of the National Black Catholic Congress during a Day of Reflection at Rochester’s Bishop Hickey Conference Center Aug. 27.

GATES — Ways to promote the sainthood of four African-Americans and raise awareness about black Catholics’ gifts to the church were among the topics discussed during a Day of Reflection for the upcoming National Black Catholic Congress XII.

More than 35 parishioners from around the diocese participated in the Aug. 27 daylong event at the diocesan Pastoral Center’s Bishop Hickey Conference Center.

Information collected during the Day of Reflection will be included in a report to be sent to organizers of the national congress, explained Lynette Saenz, director of the diocesan Office for Cultural Diversity. Congress organizers will combine feedback from Days of Reflection taking place across the country to develop the agenda for the national event in Orlando July 6-9, she added.

The 1987 congress "came out of the collaboration of black Catholics from around the country," she said. "Because of the fragmentation among blacks, we needed to find our voice and be empowered."

That congress put forth a platform that focused on education, fighting institutional racism and strengthening family life. Those tenets remain part of the core work of the congress, Pryor said.

The current focus on expanding outreach to the black Catholic community is more important than ever, as many black Catholics have left the church for other denominations, she said.

Saenz said outreach will be part of the work for next year’s congress as will be efforts to put faith into action by promoting the four candidates for sainthood: Mother Mary Lange, Augustus Tolton, Pierre Toussaint and Henriette Delille.

During the Aug. 27 discussion about the sainthood candidates, some participants were moved as they learned about the candidates’ perseverance and commitment.

Delille is the first native-born black American to be considered for canonization, noted David Powe, a parishioner at St. Rita Church in Webster. The founder of the Sisters of the Holy Family, Delille faced many challenges not only as a free black person in New Orleans but as a woman in the mid-1800s.

"I kept getting struck by how much faith was required with all that she did," Powe noted. "But she loved God, she persevered and carried out her mission. I find that extremely inspiring."

Some participants also were surprised to learn that Toussaint helped found Catholic Charities.

"He (also) helped in the movement of freeing slaves," noted Bing Reaves, a parishioner at Immaculate Conception/St. Bridget Church. "He did God’s work."

Discussion participants worked in small groups to develop ideas for promoting the candidates’ causes. Among the ideas surfaced were: prayers for the candidates to intercede on behalf of parishioners, educating all people in the pews by publishing the candidates’ stories in parish bulletins, posting those stories on social-media sites, listing the candidates’ names in prayers of the faithful on an ongoing basis and adding their names to choices for confirmation names.

Ted Mancini, principal at Aquinas Institute, said parish communities also need to find ways to connect these saints to the youths of the diocese.

"If they (the sainthood candidates) are accessible to our young people, the impact they will have I believe will be much greater," he said. "The stories of these four people will create a richness for them."

These stories may help church do a better job of drawing more young people, Chib Onwunaka said. The church should be offering an atmosphere where they will feel cared for and loved, added Onwunaka, 23, a Nigeria native who grew up in New Jersey and Pennsylvania and now is a graduate student at Rochester Institute of Technology.

"Youth need family," Onwunaka said. "But if we (the church) don’t act like a family, you’ll push people away. People want to know they’re important. … Youth need to be able to trust you."

As a young African-American man, he said he feels the church also should be playing a role in addressing the racial divide in the country right now.

"We’re the body of Christ," Onwunaka said. "All of us have a role to play."

But black Catholics in particular can play an important role because they have been fighting for a place at the table in their own church, which is still predominantly white, he noted.

"(Black) people don’t (always) see they are examples of hope … you have that endurance," he said. "We can lead the discussion, lead the way. We have a viable history we can lean on."