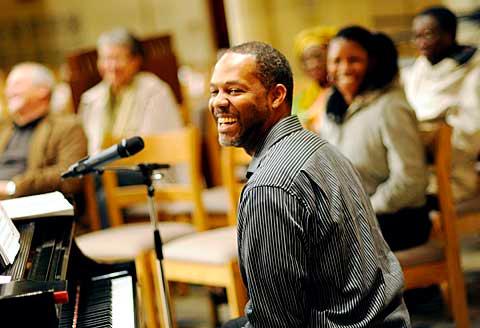 PITTSFORD — As a self-confessed "Shroudie" with a T-shirt from the Redemptorists’ Holy Shroud Guild to prove it, Deacon Tony Mercadel is clearly passionate about the Shroud of Turin.

He can talk for hours about the controversy over the burial shroud that many believe once wrapped Jesus. The centuries-old, bloodstained cloth reveals an image of a man who appears to have been whipped across his back and legs, pierced in his side, punctured in a circle around his head as if with a crown of thorns and crucified through his wrists.

Even though it captures in painful detail the aftermath of a gory torture and the features of the bearded man it wrapped, the cloth does not capture the color of the victim’s skin.

And the universality of the image of the man in the shroud is one reason why Deacon Mercadel says he links his own faith as a deacon of color with the cloth and its colorful history.

"Each person sees (the shroud) in light of his or her own spiritual perspectives, interests, history and learning disciplines," he said during his Oct. 23 talk about the shroud at the Diocesan Multicultural Conference at Nazareth College.

Deacon Mercadel’s talk was just one of several offered during the Oct. 22-24 conference, which included presentations on healthy lifestyles and a session for youths on balancing faith and daily life. The weekend also featured a prayer service and keynote presentation by black-Catholic singer Kim Harris and composer and pianist M. Roger Holland II, whose compositions will be incorporated in the forthcoming edition of the black Catholic hymnal Lead Me Guide Me II.

The weekend offered a warm-up for the upcoming Black Catholic Revival, which is scheduled for 7 to 9 p.m. the evenings of Nov. 15-17 at Sacred Heart Cathedral. The revival will feature Father Tony Ricard, a priest of the Archdiocese of New Orleans and an instructor in church doctrine for the Institute for Black Catholic Studies at Xavier University in New Orleans. The first night of the revival will be geared toward adults, the second night toward youths and the third night toward families.

The revival and all of these multicultural events are aimed at bringing together the black Catholic community, a need that was articulated during diocesan listening sessions with black Catholics in 2008, said Bernard Grizard, director of diocesan Parish Support Ministries who oversees that department’s Office of Black Catholic Ministry.

Gifts of the spirit

One of the central gifts black Catholics bring to the wider church is an example of how to connect faith and their identity, Grizard said.

"They are able to express the sacredness of who we are," he noted.

Harris expressed that idea through song, illustrating how African-Americans’ struggle for freedom from slavery is woven through their spiritual songs.

"These slave songs were used as songs of faith, but they were also very practical songs of freedom," she said.

While drawing strength from such themes as God helping Moses lead the enslaved Israelites to freedom, African-Americans coded into the songs instructions on how to travel north on the Underground Railroad.

After slavery was abolished and blacks fought segregation during the civil-rights movement, young freedom fighters adapted popular songs played on the radio to bolster their cause. To the lyrics of Harry Belafonte’s "Banana Boat Song (Day-O)" Harris taught the group to sing "Freedom! Give us freedom! Freedom comin’ and it won’t be long."

Yet faith and freedom were still inextricably linked, she said.

Their enduring heritage is important to share with the community as a whole, said Gaynelle Wethers, director of multicultural affairs at Nazareth College and a parishioner of Rochester’s Immaculate Conception Church. That was one reason Wethers invited to the multicultural conference an interfaith contingent of youths from Rochester’s Baden Street Settlement.

"One of the things I find most important is to let young people know that black Catholics do exist, and the ministry we have is extremely important to our communities," she said.

Thirteen-year-old Jacob Meyering gave the conference a thumbs up after hearing three Nazareth College students speak about balancing their faith and academic work. Jacob said the talk made him want to go to college and follow the students’ examples, but noted that he has already had to prioritize between faith and school work.

"Faith comes first and then school, because without faith, I wouldn’t be in education," said Jacob, who attends East Henrietta Church of Christ.

The need to put faith first and make time for God also was expressed by Beatrice Oparah, a Nigeria native who is a parishioner of Greece’s Holy Name of Jesus Church.

"People have too much material wealth," Oparah said. "It’s time for us to realize that without God, we can do nothing."

International voices such as Oparah’s can help Catholics see a world outside themselves, said Grizard, who noted that the entire diocese has benefitted from the diverse viewpoints and experiences brought by priests from around the world who are serving in diocesan parishes. Not only have these priests exposed area Catholics to diverse cultures, but also have fostered a sense of solidarity between the U.S. and developing countries, he said.

Yet to benefit from the input of those from diverse backgrounds, Catholics must examine how they welcome strangers, Wethers said. That is an area in which black Catholics can set a positive example, she noted.

Such a different view of Christ is one reason Deacon Mercadel’s perspective as a black Catholic deacon studying the Shroud of Turin is so unique, Wethers said.

Though he first became aware of the Shroud of Turin through the description of a parish priest, photographs and books, Deacon Mercadel began studying the shroud in depth during the 1980s when he worked at Eastman Kodak Co. Trained in traditional darkroom techniques, he was called upon to help a group of interfaith researchers studying the shroud create for analysis a continuous photograph of the cloth.

Arguments have raged for decades over whether the shroud is a religious relic and evidence of the resurrection of Jesus, or one of the greatest hoaxes perpetrated in history, Deacon Mercadel said.

"If nothing else, it is an excellent resource for meditation on what Jesus went through to bring salvation to all of us," he said.

Deacon Mercadel noted that John’s Gospel records that some apostles believed in the Resurrection after viewing the empty cloth that had wrapped Jesus’ body.

The Shroud of Turn also was responsible for a conversion experience for Deacon Mercadel’s son, Daryl, who said viewing an image of it in college led him to get fired up about his faith — years before his father began studying the shroud in depth, he noted.

The shroud, Daryl Mercadel said, allows him to see an image of Jesus that is neither white nor black.

"It bolsters my faith," he said.

EDITOR’S NOTE: For more information on the Diocese of Rochester’s black Catholic ministry, or to be added to the mailing list for black Catholics, contact diocesan Parish Support Ministries at 585-328-3210, ext. 1328.