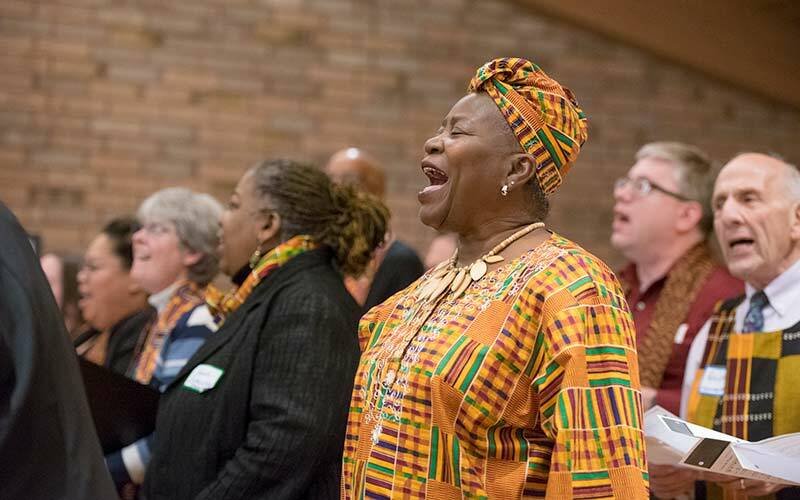 The Diocese of Rochester has begun planning in earnest for the National Black Catholic Congress XIII — a gathering of Black Catholics and those who minister to them from around the country — to be held in July 2023.

The four-day event, with roots in the late 19th century, takes place every five years and establishes an agenda for Black Roman Catholics.

“It’s important for the Black Catholic community to have conversations about their faith, to enrich each other, to empower and support each other,” said Elizabeth Johnston, project coordinator for the Diocese of Rochester’s Department of Pastoral Services.

Congresses since 1889 have created action plans for Black Catholics

The first Black Catholic Congress took place in 1889, after Daniel Rudd, a journalist and founder of the American Catholic Tribune, declared that the church is the one place of hope for Black people. He recruited delegates, and on the last day of the congress, nearly 100 Black Catholic men met with President Grover Cleveland, according to a history timeline on the National Black Catholic Congress’ website.

Another key person in National Black Catholic Congress history was Venerable Father Augustus Tolton. Born a slave, he became the first U.S. Catholic priest publicly known to be Black and is on the path to sainthood, according to the timeline.

Aside from bringing together Black Catholics from around the country, each congress has had specific objectives and ultimately produces a National Pastoral Plan of Action. Past plans have highlighted affirming faith and developing strategies for evangelizing, noted Bernard Grizard, diocesan director of the Department of Pastoral Services. Grizard was appointed by Bishop Salvatore R. Matano to serve as the diocesan representative for the 2023 congress who will oversee the diocese’s participation.

The 2023 plan will address the theme “Write the Vision: A Prophetic Call to Thrive.” The diocese hosted an Oct. 29 Day of Reflection based on that theme to prepare for the congress and help identify topics of concern to the local Black Catholic community. Thirty-one people from some 10 parishes participated.

“People gathered as Black Catholics to have conversations about their faith and point out some of the key things that need to be focused on for ministry,” Johnston explained, adding that key elements from those conversations were submitted for discussion at the national gathering next summer.

Congress is an important event, as it recognizes Blacks in the Catholic Church

Next year, Yvonne Thorne, a parishioner of St. Marianne Cope Parish in Henrietta, will serve as a delegate from the Rochester Diocese. She said she is honored to have been chosen.

“It’s so important that our culture, our race gets recognized in the church,” said Thorne, 64, who attended the 2017 congress. “It’s such an amazing experience, seeing hundreds of people from all over the country, all praising and worshipping God. And it’s uplifting to see the youth component. You come back rejuvenated.”

Chari Peter, 24, a parishioner of Rochester’s St. Monica Church, will be one of those young people attending as a diocesan delegate. The University of Rochester graduate student brings a unique perspective, having lived her first 19 years in the Commonwealth of Dominica, where most everyone is Black and Catholic. Growing up, she was never aware of the need for “an emphasis on Black presence in the church,” she noted.

“I want to be a representative (to the congress) to show that Black people, first of all, do still go to church, and that we’re interested in making new avenues to guide and welcome young people,” she said.

In addition to these delegates, about a dozen people from the diocese will participate in the congress and are expected to return energized and ready to collaborate with the diocese to carry out a unified mission for diocesan Black ministry, Grizard noted. Next steps will be taken based on everyone’s feedback and insights, he said.

“It’s important to be visionaries and missionaries and still operate as one Catholic community,” Grizard said. “To be united in solidarity — not reactionary or unprophetic. We need to be one (in order) to be engaged in order to bear witness.”

EDITOR’S NOTE: For more information on the National Black Catholic Congress and Black Catholic ministry in the Diocese of Rochester, and to access a link to the Day of Reflection summary report, visit https://ps.dor.org/pastoral-services-offices/cultural-ministries/cultural-families/black-ministry.