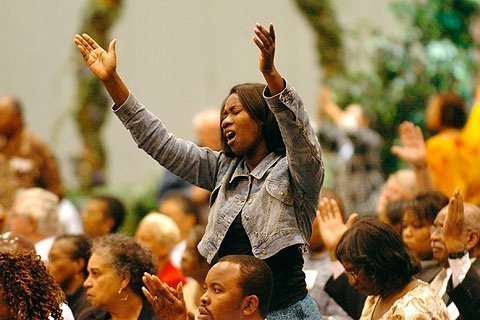 Derricka Drake of Detroit raises her hands in the air as she echoes a song of praise during the 2007 National Black Catholic Congress in Buffalo.

The Diocese of Rochester will hold a day of prayer, fellowship and reflection for black Catholics March 3 from 8:30 a.m. to 3 p.m. at Immaculate Conception Church, 445 Frederick Douglass St. in Rochester.

The day of reflection is a precursor to the National Black Catholic Congress, which is held every five years and will next take place July 19-21 in Indianapolis. The theme of this year’s congress will be "Faith Engaged. Empower. Equip. Evangelize. Celebrating 25 Years of ‘What We Have Seen and Heard.’"

The congress is expected to draw 1,000 participants, who will reflect on the findings of a summer 2011 survey of African American Catholics.

The local March 3 event is intended to build enthusiasm for the congress and help participants begin prayerful reflection on its theme, and to provide input to congress staff and presenters as they prepare for the gathering. The day of reflection will begin and end with prayer, and in between will be presentations and discussions about the National Black Catholic Survey as well as each of the topics named in the 2012 congress’ theme.

For more information, contact Lynette Saenz, diocesan coordinator for the National Black Catholic Congress and facilitator of the day of reflection, at 585-328-3210, ext. 1318.