Blessed are those who hunger for climate justice - Catholic Courier 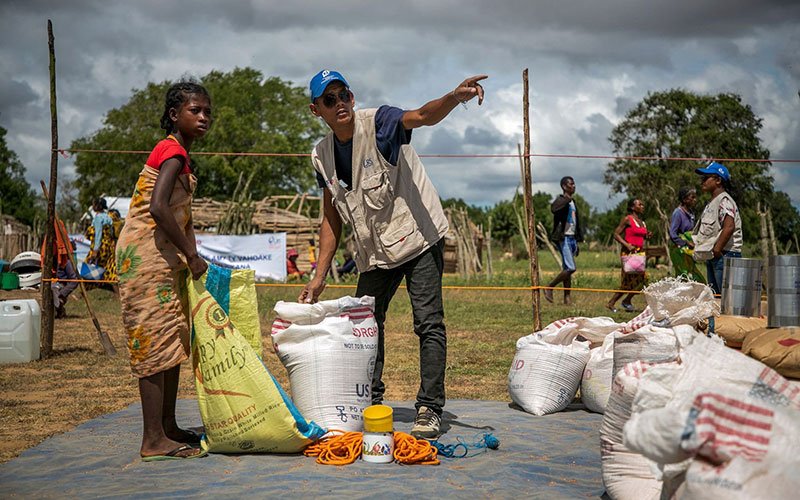 Scenes from a Catholic Relief Services food distribution in Marojela village, Marolinta commune, Beloha District in southern Madagascar. On this day, 416 people from six villages received food. Over the past five years, the southern region of Madagascar has been affected by recurring droughts. (CNS photo/Jim Stipe, courtesy Catholic Relief Services)

When people think of Madagascar, the fourth largest island in the world, they probably think of lush rainforests where lemurs swing from the trees or where vanilla grows in bountiful quantities.

Yet this glamorized idyll — popularized by Hollywood movies — is a far cry from the reality of what’s become a food-starved nation.

Located in the Indian Ocean roughly 250 miles off the southeastern coast of Africa, Madagascar is vast. In fact, it’s so vast that if it were located in the United States, its length would stretch from the Canadian border to Florida. It’s also a place of varied landscapes, from rainforests to semiarid deserts.

As a staff member for Catholic Relief Services, the global charity of the U.S. bishops, I’ve traveled across Madagascar many times — and each time I’m struck by how truly beautiful a place it can be.

Yet despite its natural beauty, Madagascar is in trouble. For the past four years, communities across its southern desert have been dealing with drought — a drought that’s become so bad that 1.1 million currently don’t have enough to eat.

It’s the worst drought to hit the country in four decades. CRS, which began working in Madagascar in 1962, is providing food assistance to more than 170,000 drought-affected people.

Historically, Madagascar has not been immune to drought. In fact, the Antandroy people, a nomadic group living in the south, have managed to adapt to the desert’s harsh conditions. Their diet of maize, chickens and foraged food might seem meager to an American, but it’s sufficient in an area with limited rainfall.

Yet in the era of climate change, the Antandroy people are suffering. “I don’t know what happened. But somebody told me the foreigners moved the clouds,” an Antandroy villager said.

The Antandroy people realize they are on the frontlines of a crisis not of their making. In fact, the cruel irony of climate change is that it impacts the world’s poorest and most vulnerable communities, which are the least responsible for the problem.

What, then, can we do as U.S. Catholics to stand in solidarity with our Malagasy brethren in this time of great need?

And in the era of climate change, this is the challenge for all of us.

The beatitude calls us, as Catholics living our faith, to hunger for climate justice so that people can live less hungry, less thirsty lives. Jesus’ metaphorical use of “hunger and thirst” emphasizes the difficulty, pain and sacrifice involved in doing what is right.

With this beatitude we are challenged to suffer in service of others. Communities in Madagascar are suffering the worst effects of climate change — despite contributing so little to the problem.

We must take their cause and raise it up — we must hunger for justice for them through our prayers, our thoughts and our actions. It is a tough request that requires soul-searching. However, living one’s faith is not easy. Jesus never promised us it would be.

(Dan Rooney works as the chief of party for CRS Madagascar where he supports a team focused on running programming related to nutrition, agriculture and more. He has over 20 years of experience in sub-Saharan Africa supporting U.S. government and humanitarian programs.)