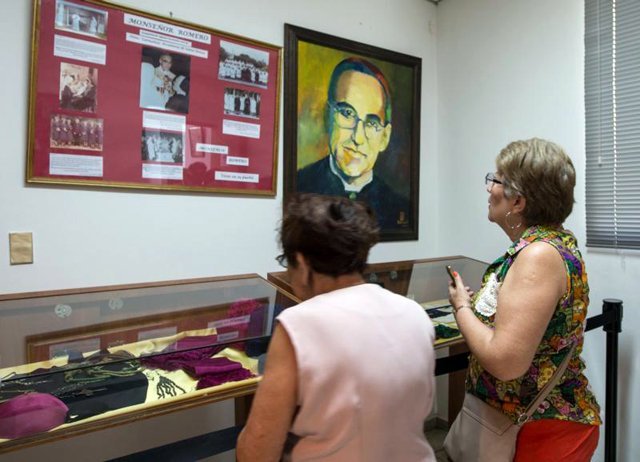 Women look at relics and other items of Blessed Oscar Romero at Divine Providence Hospital in San Salvador March 22, 2015.

WASHINGTON (CNS) — Relics of Blessed Oscar Romero, including a handkerchief with blood from the day he was assassinated, will briefly be part of the U.S. Catholic Church’s Fortnight for Freedom observance July 1 in Los Angeles.

A handkerchief with blood from the day Archbishop Romero was martyred in El Salvador and a microphone he often used when he celebrated Mass every Sunday will be present at a special noon Mass at the Cathedral of Our Lady of Angels and will be available for public veneration until 2 p.m., said a statement from the Archdiocese of Los Angeles.

Blessed Romero’s relics will join those of St. Thomas More and St. John Fisher, but the Salvadoran martyr’s relics will remain in Los Angeles and will not travel with the other relics for the closing of the Fortnight for Freedom in Washington July 4.

In a statement, the Archdiocese of Los Angeles said Blessed Romero, who was beatified in May 2015, "advocated for Christian love, reminding the people that they were loved by God and that fighting back with Christian charity was the way to victory during the 12-year long civil war in El Salvador."

Carlos Colorado, a lawyer from Los Angeles who blogs and writes extensively about Blessed Romero, said he was glad that a link was established between the Salvadoran archbishop assassinated during Mass after repeatedly speaking up for the poor and against violence, and the English 16th-century saints who also spoke up during their time.

What links the three, Colorado said, is the idea that "sometimes have you stand up to your own government." Sometimes being a person of faith will lead others to accuse you of being unpatriotic and disloyal to your country, he told Catholic News Service.

Today, no one questions whether St. Thomas More and St. John Fisher were patriots, he said. And in time, Blessed Romero, too, will be seen as a great patriot in his own country, even though he was accused of the opposite when he was alive and even in death.

"The most important lesson is the idea of being radically faithful. You have to follow your faith even though the consequences are dire," and you face rejection from the world and sometimes the government, Colorado said. That’s exactly what Blessed Romero faced when he stood up for the poor and the ones who seemed to matter the least in Salvadoran society of the 1970s and 1980s, he added.

"It’s a level of radicalness we’re unfamiliar with," he said.

Colorado was planning to visit the relics of St. Thomas More with other lawyers and judges from the St. Thomas More Society, a group of Catholic lawyers. But because he was born in El Salvador, and because of his affinity for Blessed Romero as martyr, he said being able to venerate the relics brings a special kind of joy and also gratitude toward Los Angeles Archbishop Jose H. Gomez, who recognizes the presence of Salvadoran Catholics in the community.

Los Angeles has one of the largest populations of Salvadorans outside of El Salvador. In 2010, a census estimate put the Salvadoran community in the area at 350,000 but Salvadoran organizations believe the number to be much higher. Many of them, like Colorado, ended up in Los Angeles after fleeing their country’s civil war, in which Blessed Romero was one of an estimated 75,000 Salvadorans killed between 1980 and 1992.

In his homilies and on radio programs, Blessed Romero called for a stop to violence, particularly for a stop to civilian killings by government forces, even though he was repeatedly threatened. He was killed on March 24, 1980 while celebrating Mass.

Blessed Romero, along with the British saints, is one of 14 "witnesses for freedom" featured during the Fortnight for Freedom, the Catholic Church’s national education campaign on religious liberty.