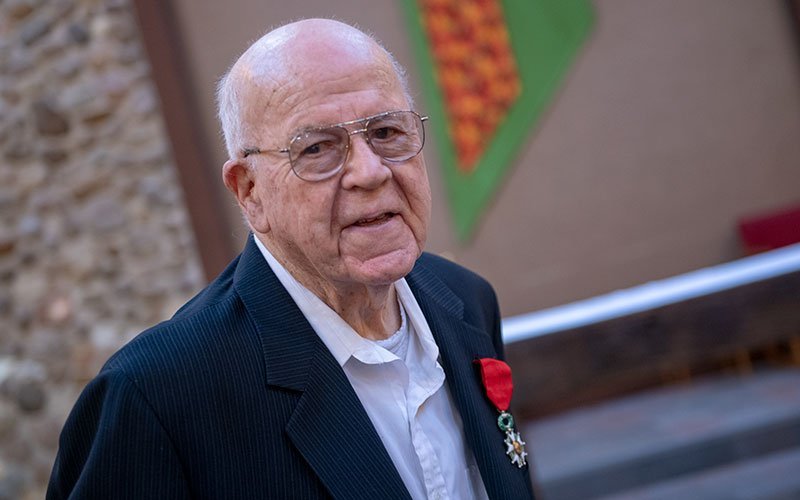 World War II veteran Eugene Dollard was honored in June 2021 as a Knight in the National Order of the Legion of Honor. (Courier photo by Jeff Witherow)

HAMLIN — He was less than a month past his 19th birthday. Yet as his ship neared the French shores of Omaha Beach, Eugene Dollard found himself having to grow up in a hurry.

Dollard took part in the Allied invasion of Normandy on June 6, 1944 — also known as D-Day, one of the most horrific battles of World War II. Dollard survived, but many of his comrades were cut down by heavy fire from German forces.

The chaos of D-Day — and later, the Battle of Okinawa — stood in stark contrast to Dollard’s upbringing in the quiet farming community of Hamlin, located in the northwest corner of the Rochester Diocese. A Brockport High School graduate, he had completed one semester at the University of Notre Dame when he enlisted in the U.S. Navy in 1943.

“My dad was really surprised,” Dollard recalled, adding that “I wanted to just help, to deter Hitler from taking over everything. That was his aim.”

Following training, Dollard was assigned to the Navy’s amphibious operations. On D-Day, his ship — the newly commissioned USS Henrico — transported part of the U.S. Army’s 1st Infantry Division in the initial wave on Omaha Beach. Dollard landed on the beach and took refuge in trenches despite a barrage of bullets; however, many of his cohorts were not so fortunate. Maneuvering around corpses, Dollard dragged a number of wounded soldiers into the trenches so they could receive first aid.

Some 77 years after that harrowing experience, Dollard was honored in June 2021 as a Knight in the National Order of the Legion of Honor — France’s highest honor for military bravery and service — for his role in aiding the liberation of France. With that distinction came a medal for him to add to other military awards received over the years.

Additional warfare danger awaited Dollard after D-Day. From Omaha Beach the Henrico moved to the Mediterranean, getting hit at one point but managing to avoid sinking. In mid-1945, during the Pacific tour, Dollard was involved in the bloody, three-month Battle of Okinawa near Japan; he was wounded when the Henrico was hit by a Japanese suicide plane but soon recovered. Later at Okinawa, he was engaged in a physical struggle with a Japanese general during which he was held at knifepoint and suffered stab wounds. Dollard managed to apply a wrestling move and capture his foe before turning him over to military police. He also faced vicious typhoons while in the Pacific before being honorably discharged from his three-year Navy stint in late 1945.

“It was a shaker-upper — just things happening you didn’t believe were going to happen,” Dollard said of his wartime experiences. He added that his Catholic faith, which has always been important to him, was never more valued than when his life was in peril.

“The only thing that helped bring me through was strong faith,” said Dollard, a parishioner of St. Elizabeth Ann Seton in Hamlin.

Following his discharge, Dollard resumed studies at Notre Dame, graduating in 1949 with a bachelor of commerce degree. He began law school at Notre Dame, but opted to return home to Hamlin — where he still resides today — and take over his family’s business operations that have included a liquor store he opened in the 1950s on Lake Road North, a grocery enterprise, and farm and rental properties.

Although Dollard’s mobility is limited these days, he still pops into the liquor store once in a while. In addition, he and his second wife of 35 years, Marci, faithfully attend the 9:30 a.m. Mass every Sunday at St. Elizabeth Ann Seton. They’ll be on hand as his name is announced the weekend of Nov. 6-7, when the parish pays tribute to all its military veterans in advance of Veterans Day Nov. 11.

“He’s a very nice man,” Marci Dollard said of her husband. “We are proud of him.”

Dollard also expressed positive sentiments about his long life despite all he endured during World War II.

“I’ve been blessed all the way through,” he stated.