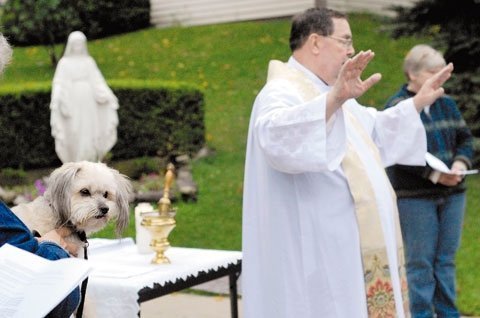 Molly, a Maltese/Pomeranian, is blessed by Father William Darling along with several other animals and their owners at St. Joseph Church in Weedsport Oct. 4.

WEEDSPORT — Our Lady of the Snow Parish is going to the dogs.

At least, that’s what passers-by might have thought Oct. 4, when eight dogs — accompanied by their owners — converged on the parking lot of St. Joseph Church in Weedsport, which is one of Our Lady of the Snow’s three worship sites. The dogs and their owners were gathered with several other parishioners and their pets for Our Lady of the Snow’s annual pet blessing, which is held each year on or near the feast day of St. Francis of Assisi, the patron saint of animals. The parish has been offering the blessing for several years, although this year marked the first one held since Father William Darling became pastor in June.

Although the majority of the pets in attendance Oct. 4 were canines, the blessing is open to animals of all stripes, and to those without stripes, too. This year the eight dogs were joined by at least two fish and one tiny tree frog. In previous years parishioners have brought cats and other common household pets, and even such uncommon pets as ducks, geese and guinea hens, noted Kathleen Timerson, parish secretary.

"I’d like to welcome you here to Our Lady of the Snow. I hope you all brought your singing voice. And if any dogs want to join in, they can sing along," Father Darling said at the beginning of the blessing service before leading the parishioners gathered in "Make Me A Channel Of Your Peace," followed by the service’s opening prayer.

"Lord, give us the humility to thank you for the creation of animals, who can show affection which sometimes puts us to shame. Enlarge our respect of these, your creatures of whom we are the guardians. And give us a sense of responsibility towards all your creation for Jesus’ sake," Father Darling prayed.

Following that theme, the first reading from Genesis 1:20-28 recounted the creation of animals and of man, and God’s command that man have dominion over the animals. Humans rule and have control over the animals, Father Darling said later in his reflection, but along with that control comes responsibility.

"I think God will look kindly on those who have taken care of animals," he said.

St. Francis of Assisi provided a great example of someone who cared for all of God’s creations, including the animals, Father Darling continued.

"Today is a wonderful day to honor our patron, St. Francis of Assisi, who’s been such a marvelous example. One way of honoring St. Francis is to bring together part of God’s creation and give them a wonderful blessing," he said. "I’m going to pray a prayer over all of these pets here, and then I’m going to go around and gently use holy water over them. I don’t want to scare any of these animals."

Even the best-laid plans sometimes go awry, however, and despite Father Darling’s best efforts many of the dogs still seemed somewhat uneasy as he approached them and sprinkled holy water over them. Cosmo, a large yellow Labrador retriever sporting a faded blue New York Yankees collar, cowered a bit when the priest approached, while a young German shepherd puppy nearby blinked confusedly as the drops of holy water landed on his fur. Most of the pets, however, seemed to regain their composure quickly and had resumed fidgeting at the ends of their leashes by the time their owners began singing the closing hymn, "He’s Got the Whole World In His Hands."

Cosmo’s owner, Theresa Leonardi, said she thought her dog had enjoyed his outing, and she was glad he’d been blessed.

"I thought (the blessing) was a great idea," she said. "Everyone is a fan of St. Francis, and we’ve got to take advantage of these opportunities."

Fellow parishioner and relative Alexandra Leonardi attended the blessing with her parents, Johanna and Sal, as well as her appropriately named tree frog and Beta fish, respectively named Greenie and Rojo, which is the Spanish word for red. Alexandra brought her pets, "Because my pets have lived a long time, and I want them to be blessed," she said, clutching Greenie’s aquarium.

Father Darling said pet blessings have held a soft spot in his heart ever since he took in a basset hound named Wolfgang Amadeus Mozart IX. Although his beloved hound succumbed to cancer two years ago, Father Darling still enjoys blessing parishioners’ pets and was glad to be part of Our Lady of the Snow’s blessing.

"I thought this would reach out to families because a lot of families have pets," he said. "We want to see if we can reach out and get families to identify with their faith."

Tags: Feast Days & Saints
Copyright © 2023 Rochester Catholic Press Association, Inc. All rights reserved. Linking is encouraged, but republishing or redistributing, including by framing or similar means, without the publisher's prior written permission is prohibited.