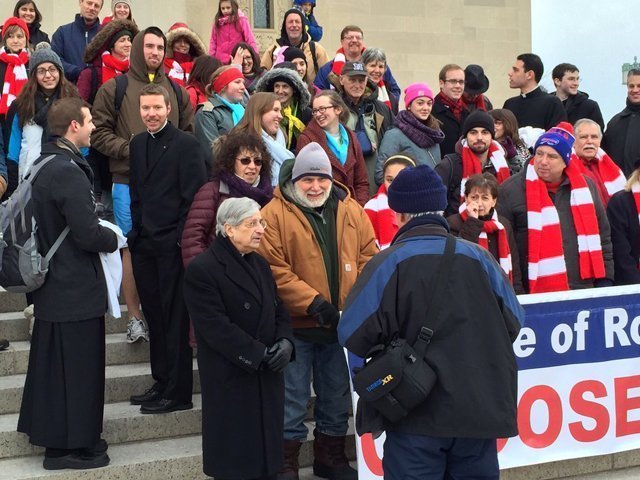 Bishop Salvatore R. Matano and marchers from the Diocese of Rochester gathered outside the Basilica of the National Shrine of the Immaculate Conception in Washington, D.C., before they celebrated Mass the morning of Jan. 22. The forecasted blizzard did impact travel to Washington for some. The bus company that was to transport marchers from Ithaca cancelled the trip.

Because of a predicted snowstorm in Washington, the St. Louis archdiocesan Catholic Youth Apostolate canceled its Generation Life pilgrimage to the March for Life.

About 2,200 teens, adult chaperones, volunteers and staff were expected to participate in the 43rd annual march Jan. 22.

The youth apostolate consulted with several area meteorologists, who were "95 percent confident" the Washington region would receive approximately 15 to 18 inches or more of snow over a few days, beginning the day of the march, according to executive director Brian Miller.

Participants will be refunded the cost of the trip, minus a small non-refundable registration fee. The apostolate planned to host a local event at the Cathedral Basilica of St. Louis the afternoon of Jan. 23.

"This is not a decision that was taken lightly," Miller told the St. Louis Review, the archdiocesan newspaper. "The likelihood was so high of a major weather event in D.C. As a father, I considered if those were my children on the bus, what would I want to happen? We have a moral obligation to prioritize the safety and well-being of our youth."

As of late afternoon Jan. 21, the Capital Weather Gang was reporting that starting at 3 p.m. (EST) Jan. 22, a blizzard warning will span the entire Washington region until 6 a.m. (EST) Jan. 24. About 2 feet of snow was forecast for the area.

"Everything is still on schedule," Jeanne Monahan-Mancini, president of March for Life, told Catholic News Service mid-day Jan. 21. She said that so far only one speaker had canceled.

"The March for Life will go on no matter the weather," noted the organization’s website, http://marchforlife.org.

"Pro-Life Is Pro-Woman" is this year’s theme.

Because of the ongoing refurbishment of the National Mall and strict new regulations that require temporary flooring to protect the grass, the Jan. 22 rally will be held at noon on the Washington Monument grounds.

Daly also was headlining the first major pro-life conference for evangelicals to be held in conjunction with the March for Life.

After the rally, participants planned to march up Constitution Avenue to the U.S. Supreme Court.

Many groups that still planned to come to the event marking the anniversary of the 1973 Roe decision included busloads from the Diocese of Bismarck, North Dakota.

"They’re a bunch of tough folks," said Suzanne O’Connor, an office assistant at St. Peter’s Catholic Church on Capitol Hill, where the North Dakotans expected to arrive in the early morning Jan. 22 before the rally and march.

Also not canceling as of the afternoon Jan. 21 were groups from the Diocese of Springfield, Illinois, and the dioceses of St. Augustine and Venice, Florida.

AP quoted Monahan-Mancini as saying that "most marchers do tend to come from a strong religious background" that makes them willing to sacrifice their comfort at what usually is the coldest time of the year."

She added that anyone who is pro-life and "a peaceful protester is welcome to join us at the March for Life."

The Missouri Life Caravan was moving forward with its travel plans to attend the march, according to Connie Eller of Missouri Right to Life.

Other pilgrims from St. Louis arrived in Washington a week earlier last week and were expected to go ahead with plans to participate in the march. And more than 500 St. Louis teens separate from the Generation Life group had tickets to attend the Rally and Mass for Life at the Verizon Center, organized by the Archdiocese of Washington.

Diocesan groups in Ohio, Virginia, Indiana and Michigan canceled their trips to Washington, but the Philadelphia Archdiocese indicated no change in plans as late Jan. 21. Some Philadelphia parishes were canceling their trips, and the archdiocese left the call up to individuals.

Auxiliary Bishop John J. McIntyre planned to lead the Philadelphia contingent traveling by bus, train and car to Washington. Hundreds of parishioners, clergy and religious from the Philadelphia Archdiocese normally travel each year for the march.

Dubbed Winter Storm Jonas, some 74 million Americans from Nebraska to New York City will be affected by blizzard conditions of the mammoth storm.

Brinker is a staff writer at the St. Louis Review, newspaper of the Archdiocese of St. Louis. She and photojournalist Lisa Johnston of the Review arrived in Washington Jan. 19 to cover the march but the impending blizzard cut their trip short. Contributing to this story was Kurt Jensen in Washington and Matthew Gambino in Philadelphia.