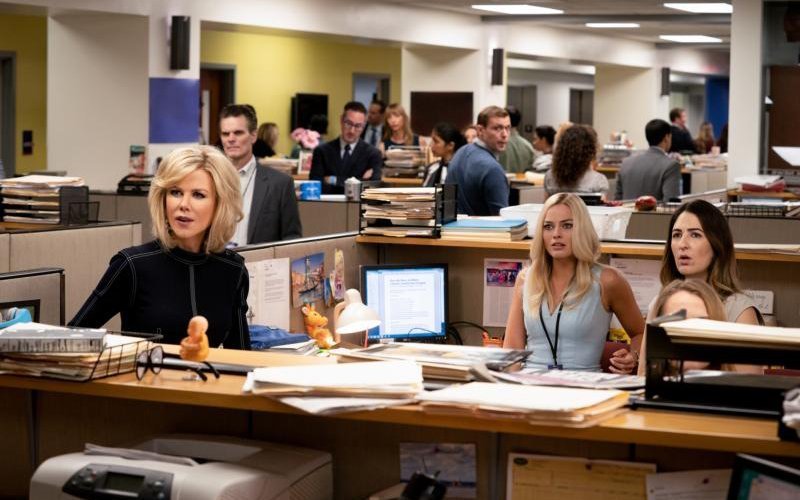 Nicole Kidman, Margot Robbie and D'arcy Carden star in a scene from the movie "Bombshell." (CNS photo by Lionsgate)

NEW YORK (CNS) — Ripped from the headlines, as the saying goes, “Bombshell” (Lionsgate) dramatizes the real-life story of the sexual harassment scandal that swamped the Fox News organization in 2016 and helped to launch the #MeToo movement.

Director Jay Roach (“Trumbo”) treats the subject like a documentary, and Charles Randolph’s screenplay is forceful and persuasive about the corrosive workplace environment and the heavy toll exacted on female employees who dared to speak out, risking careers and livelihoods.

It’s unclear, however, just how accurate this disturbing depiction is. Much like the Netflix series “The Crown” on the British royal family, “Bombshell” blurs the line between fiction and reality, having look-alike actors play actual TV moguls and personalities, in many cases splicing them into archival news footage. The effect is as impressive as it is unsettling.

“Bombshell” has an important story to tell about respect, integrity and the law. This is gritty material, nonetheless, so discerning adult viewers who take it on will have to endure raw and offensive dialogue and situations.

“Bombshell” takes its punning title seriously, chronicling the cult of beautiful anchorwomen at Fox News and the ensuing cataclysm wrought by the harassment and its revelation.

It’s the tale of three women, two based on real people. There’s Megyn Kelly (Charlize Theron), the rising star of her own prime-time news program, who dared to challenge then-presidential candidate Donald J. Trump on his disparaging treatment of women, earning her the wrath of conservative Fox viewers.

Thanks to the magic of makeup and prosthetics, Theron is an uncanny doppelganger for Kelly.

There’s also Gretchen Carlson (Nicole Kidman), whose star is fading at Fox, due to her outspokenness, which rankles the company’s real-life founder, chairman and CEO, Roger Ailes (John Lithgow).

Lastly, there’s Kayla (Margot Robbie), a fictional character purported to be based on the experiences of several Fox employees. The self-proclaimed “evangelical millennial” comes from a family where the TV is always tuned to Fox News. “Fox is how we do church,” she says.

Kayla is wide-eyed but ambitious, and arranges an interview with Ailes. Thoroughly living up to his “Jabba the Hut” nickname, the sleazy, corpulent Ailes demands that she lift up her skirt to show off her legs. “I’m discreet but unforgiving,” he warns her, insisting on loyalty from his minions. Kayla makes a deal with this devil, to her lasting regret.

On the side, she also hooks up with the fictional Jess (Kate McKinnon), who shares her office cubicle. Jess has a duo of skeletons in her closet — she’s a lesbian and a Hillary Clinton supporter — two strikes for a Fox News employee. Her presence, and their sexual relationship, seem gratuitous and out of place.

Ailes oversees his powerful media empire like a naval commander. “News is like a ship,” he explains. “Take your hands off the wheel and it veers too far to the left.” His guiding principles for making Fox News popular are, in his own words, “Frighten” and “Titillate.”

“Bombshell” zeroes in on the fateful summer of 2016 when Carlson, having been fired, decided to sue Ailes for sexual harassment, igniting a media firestorm and incurring the wrath of Ailes’ real-life boss, Rupert Murdoch (Malcolm McDowell).

In the meantime, Kelly (who also serves as the film’s narrator), wrestles with her conscience, deciding whether to come forward with her own story and risk the consequences. The conclusion may be foregone but the drama is no less compelling for that.