Bonds with the young are special - Catholic Courier 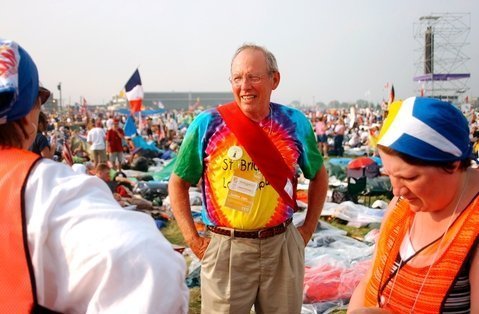 He is a dignitary of the Catholic Church –yet whenever groups of kids are involved, Bishop Matthew H. Clark prefers to be just one of the gang.

Bishop Clark is well-known for routinely circulating at local youth rallies in jeans, a T-shirt and sneakers, just like his younger counterparts — unpretentious, obviously still a kid at heart.

“Yes, I love young people — my ministry with them, among them and to them,” Bishop Clark said. “I have to confess that of all the elements of ministry, this is my most selfish element because I get so much life out of it, so much energy.”

“During the mealtimes he would go into the cafeteria and sit down with a group of young people he didn’t know, and just start talking with them. And he would do that all the time,” Theisen remarked, adding that when the bishop was being singled out from an auditorium stage, he often couldn’t immediately be located because he was sitting and socializing among the audience.

“I know the youths adore him. They just feel so welcomed and at home in his presence,” said Theisen, who now serves as director of membership services for the National Federation for Catholic Youth Ministry. “That’s something you can’t teach a person to do. It’s just a natural gift.”

One of Bishop Clark’s most popular rituals at youth events has been conducting question-and-answer sessions, during which he has provided detailed, patient and often humorous answers to such audience queries as what sports and animals he likes; how he pays his bills; and whether he has ever seen God. But whether in a group setting or chatting one on one, Bishop Clark said it’s vital to convey respect for young people by treating them as equals.

“No matter how old they are, you try to say, ‘You’re a very important individual.’ You try to say it in how you behave with them,” the bishop said, adding that he takes his cue from the priests and women religious who encouraged him during his own youth: “I knew firsthand how important that was. I guess you sort of pay back.”

Theisen noted that such a demonstration of respect from such a high-ranking person can have a powerful effect on young peoples’ faith and keeping them involved in church life.

“That ministry of presence speaks more than any words can say,” stated Theisen, who worked for the Rochester Diocese from 1992-2005.

Bishop Clark’s presence may never have been more evident than in 1993, when he joined 600 other people from this diocese in traveling to Denver to see Pope John Paul II at World Youth Day in 1993. He cheered wildly along with the diocesan contingent at Mile High Stadium when the pope first appeared; slept outdoors in a sleeping bag one night along with the teens rather than at a hotel; and turned down other perks — including attendance at a Mass with other bishops and the pope — to remain with the diocesan group all week.

Theisen said the Denver experience proved a galvanizing force for local youth ministry and Bishop Clark’s involvement in it. Subsequent growth has been marked by widely expanded offerings at parishes via youth groups and opportunities for liturgical ministry, as well as several hundred teens’ participation in local and national conventions, rallies and other events. Bishop Clark has been closely connected to the surge, having served multiple terms as the U.S. bishops’ episcopal liaison to the National Federation for Catholic Youth Ministry, as celebrant for the closing Mass of the 2007 National Catholic Youth Conference and as homilist for NCYC’s final Mass in 2001. Both of the NCYC liturgies had at least 20,000 people in attendance.

Theisen observed that Bishop Clark’s positive influence is noted in youth-ministry circles across the nation.

“We are envied by many, I can tell you that,” he said with a laugh.

Tags: Bishop Matthew H. Clark
Copyright © 2023 Rochester Catholic Press Association, Inc. All rights reserved. Linking is encouraged, but republishing or redistributing, including by framing or similar means, without the publisher's prior written permission is prohibited.