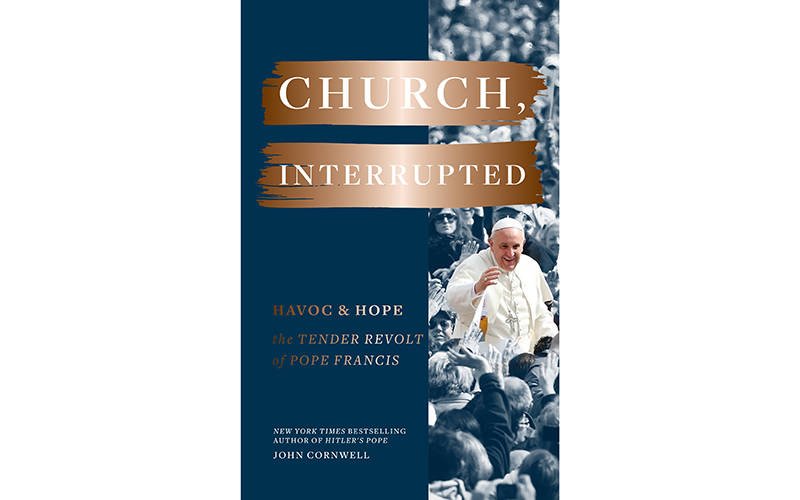 This is the cover of the book “Church Interrupted: Havoc & Hope: The Tender Revolt of Pope Francis,” by John Cornwell. The book is reviewed by Agostino Bono. (CNS photo courtesy Chronicle Prism)

Evaluating a book about a papacy in progress is like reviewing a new play before seeing the final act. No matter how well done, the reader wants to know what happens next.

So it is with John Cornwell’s book, “Church Interrupted,” about the first seven years of Pope Francis’ pontificate. The author does a good job detailing issues the pope has tackled and the controversies stirred, especially inside the church as the pope takes a more pastoral approach to dealing with the faithful as opposed to the doctrinal style of his two predecessors.

As the book notes, this has sharpened the already ideological divisions in the church to the point where ecclesiastics are openly criticizing the pope. Clearly, Cornwell sympathizes more with the pope but his reportage is balanced, with papal critics getting their day in court.

But the question still remains: How will this end?

Events already have outpaced some issues. More cases of clergy child sex abuse and their decadeslong cover-up by church officials have emerged. With the pope’s approval, the Congregation for the Doctrine of the Faith barred priests from blessing homosexual civil unions, damping the pope’s earlier calls encouraging a more merciful, forgiving approach so homosexuals feel comfortable in the church. The blessings decision also drew sharp criticism from several important cardinals and bishops in the church’s progressive wing, further widening church splits.

Yet, the book has value. It establishes the foundations of this papacy and gives readers a framework for judging future events. Cornwell is no stranger to the papacy. He has written several books on previous popes, Vatican intrigues and the juggling of papal politics with competing church ideologies.

The book combines Cornwell’s original reporting and insights with coverage from a spectrum of published news organizations. Portions of the book are dedicated to specific hot-button topics such as child sex abuse, married priests, the role of women in the church, climate change and giving Communion to divorced and remarried Catholics whose first marriages still have church recognition.

More attention, though, should have been given to the pope’s call to end clericalism, the administration of the church by ordained men as if it were a right. The pope sees this as the crux to bureaucratic reforms needed to end the “old boy” network, improve transparency and streamline a bureaucracy historically prone to scandals.

Cornwell doesn’t shy away from the pope’s mistakes. He gives ample coverage to the pope’s initial refusal to believe a Chilean bishop had covered up sex abuses by a popular priest: but notes how the pope publicly admitted his mistake — a papal rarity — and removed the bishop once the pope’s own investigation confirmed the allegation.

Weaved throughout is Cornwell’s belief that the pope is deliberately making provocative statements and taking disruptive actions — such as washing the feet of a Muslim woman — to purposefully stir things up and establish a creative tension among competing Catholic factions.

Francis certainly has stirred things up. He declared climate change a pro-life issue, rankling many Catholics who see that cause only in political and moral opposition to abortion. But he also hasn’t approved ordaining married men, even after there was widespread support at a synod of bishops.

Whether he is doing a deliberate juggling act, however, is highly debatable. Many controversies facing the church are long-standing. They caused headaches for previous pontiffs and have no bifurcated solutions. Stating a position automatically antagonizes some sectors of the church.

At the same time, Cornwell notes that the pope has reopened doors. Although he hasn’t changed church opposition to ordaining married men to the priesthood or to ordaining women to the diaconate the fact that he talks about these permits open dialogue.

Although the book can’t report this papacy’s end game, Cornwell is optimistic that much of what Pope Francis has done will survive. The author notes that the majority of voting cardinals in the next papal election have been named by this pope and many come from developing countries that never before had a cardinal.