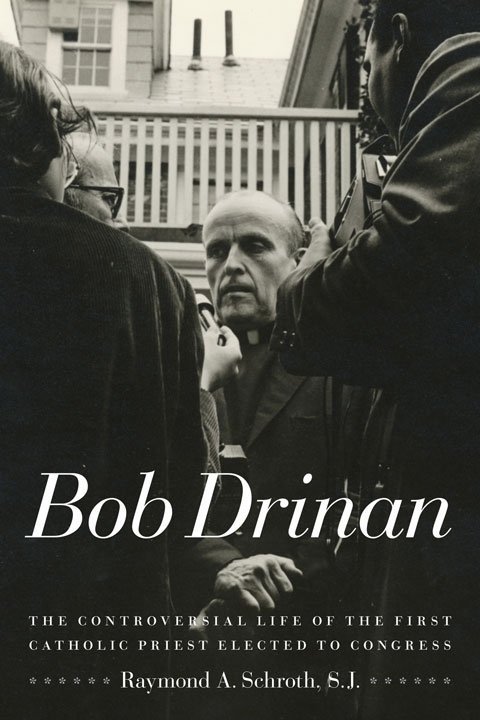 Jesuit Father Robert Drinan served from 1971 to 1981 as an elected representative in the U.S. Congress from Massachusetts. He "decided to answer the question of whether the public roles of the priest and politician are compatible by actually playing both roles," according to Bob Drinan: The Controversial Life of the First Catholic Priest Elected to Congress.

This readable, biographical look at Father Drinan’s life as a Jesuit priest, politician and law professor informs readers that he would answer "yes," a priest can serve successfully as an elected politician. But Pope John Paul II’s answer was "no," and in April 1980, Father Drinan was instructed not to run for a sixth term in Congress.

The author of Bob Drinan is Jesuit Father Raymond Schroth, an associate editor at Jesuit-sponsored America magazine. "Whenever I have written a book, it has had to be about someone I admired," he acknowledges.

Yet, Father Schroth clearly did his homework in the form of research and interviews, and endeavors to present an honest picture of Father Drinan’s intellectual and personal strengths, as well as weaknesses.

The author situates his story within a larger story of the formidable flow of issues both church and society contended with from the times surrounding Father Drinan’s early Jesuit formation and his 1953 priestly ordination to the decade he served in Congress and the 26 years afterward. He died in January 2007.

Thus, the book affords readers an opportunity to revisit many of the dominant religious and social debates of recent decades — from the Watergate scandal to the Supreme Court’s Roe v. Wade abortion decision, from debates over nuclear weaponry to the anti-apartheid struggle in South Africa and to Cardinal Joseph Bernardin’s early proposals of a consistent life ethic.

Not surprisingly, Father Drinan’s approach as a congressman to the abortion issue re-emerges for discussion again and again in this book.

A question mark punctuated Father Drinan’s political career. In part the question was whether a priest could represent one political party and still dedicate himself to all people in the ways expected of priests.

But always managing to attract great attention, despite Father Drinan’s passion to end the Vietnam War or the energy he invested in international human-rights cases, was the distinction he drew as a legislator between abortion as a legal issue and a moral issue.

"The broader public evaluation of Drinan’s career might fall into three groups," Father Schroth writes. There were his severe critics, his devoted followers and a third group of "admirers, who respected him as a champion of human rights but had serious reservations on his abortion position."

Among "those who strongly disliked him, most did so because of his abortion position," Father Schroth explains. However, for "his devoted supporters," Father Drinan’s "lifelong commitment to human rights around the world is the unifying, idealistic glue of his public life."

Surely, Father Drinan viewed his apparently evolving abortion position differently than did his critics. He has spoken of the "horror" of abortion and insisted that "an unborn child must be respected as a precious gift from God."

But he long opposed making abortion a crime in America’s pluralistic culture and even seems to have thought laws limiting abortion to certain hard cases had a left-handed way of legitimizing those abortions.

Whatever the case, many thought it appeared that Father Drinan supported abortion. And Father Schroth says that many admirers, who would follow Father Drinan "on the other justice issues and even accept the general principle that not all immoral activity can be controlled by law," remained "puzzled by what they consider(ed) his inconsistency on abortion."

After leaving Congress Father Drinan taught law at Georgetown University in Washington. But it seems that as he "was cleaning out his congressional office" and preparing to leave, he attended a White House dinner hosted by President Jimmy Carter. Father Schroth shares this fascinating little story about that evening:

"When he arrived at the White House, President Carter, who had been defeated for re-election the previous month by Ronald Reagan, took him aside and said, ‘Father, God wants us both to do something different next year, and it will be more important.’"

Was Carter prophetic? I certainly felt it was the concluding section of Bob Drinan that brought him most to life as a person. At Georgetown, Father Drinan was to earn "the devotion of another generation of young men and women," Father Schroth writes.

He reports that "a Jesuit who knew Drinan fairly well" said that "while he could be ‘snarky’ as a congressman, he mellowed" in his new life, though the mellowing took some time.

Moreover, Father Schroth says, the opportunities "for kindness" Father Drinan encountered as a professor "gave him a way to express those profound paternal feelings that had long been a major emotional force in his life."

Gibson was the founding editor of Origins, Catholic News Service’s documentary service. He retired in 2007 after holding that post for 36 years.