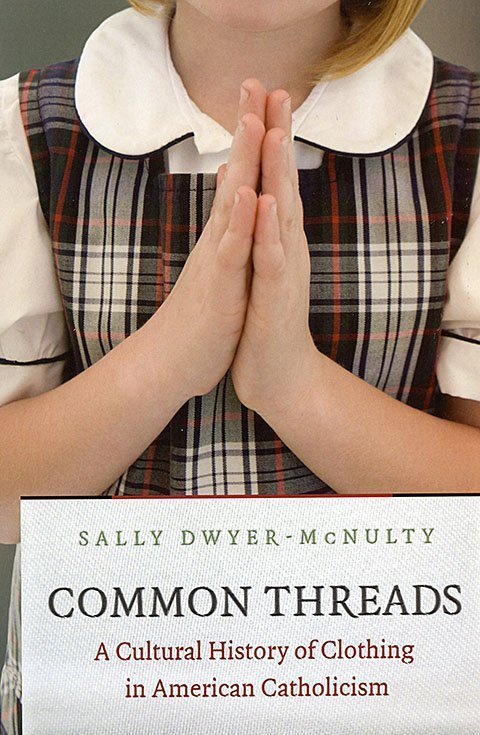 This is the cover of "Common Threads: A Cultural History of Clothing in American Catholicism" by Sally Dwyer-McNulty. The book is reviewed by Nancy L. Roberts.

When the new Pope Francis discarded the traditional red papal footwear for simple black shoes, he underscored the power of clothing as a cultural symbol.

This is something Catholics, both clergy and lay, have always understood. From priests’ Roman collars to nuns’ veiled habits to schoolgirls’ blue serge jumpers, American Catholics have long worn visually distinctive attire.

Such clothing has helped create a sense of identity and belonging for Catholics, who historically have sought to find their way in a social landscape ruled by Protestants. For instance, in earlier times, when most priests were foreign-born, the characteristic Roman collar and other specialized clothing helped clergy gain respectability.

Sally Dwyer-McNulty, a history professor at Marist College, has given us an intriguing and thoughtful examination of what Catholics were wearing at different times and why.

Because Catholics emphasize a sacramental worldview, she writes, their clothing is fraught with symbolism; and it also holds "political and social significance." Thus popes wear white as a symbol of their "singular holiness and purity," while "bishops carry staffs because they shepherd the people, and nuns wear habits mostly of a dark hue to symbolize death to the world and ‘marriage’ to Christ."

Dwyer-McNulty focuses on the period from the early 19th to the 21st century, a time span during which Catholicism developed from a largely immigrant church that was sometimes seen as suspect by the Protestant majority because of its poverty and perceived otherworldly focus to a mainstream, socioeconomically successful religious institution centrally engaged in civic and social life. She focuses on three major groups: male clergy, female religious and schoolgirls. Among her findings:

* Through the 1930s, bishops adopted uniform, easily recognizable clothing styles "to exert both control and authority over their middle managers and lay Catholics."

* This clothing also signaled Rome that despite the Enlightenment’s influence on American culture, obedience to papal authority prevailed.

* At first, until about World War II, nuns did not embrace the wearing of habits for traveling; they preferred to wear lay clothing to avoid identification as Catholics and subsequent discrimination from the Protestant majority.

* Restrictive dress for young women "elucidated … the Catholic Church’s view that girls needed to be guided more due to their propensity to commit sins of vanity and that girls and females in general were in a position to be controlled."

By the early 1960s, with its political and social upheaval, the "Catholic clothing trademark" had begun to unravel, Dwyer-McNulty writes.

The twin influences of the Second Vatican Council and the civil rights movement sparked a relaxing of nuns’ habit styles. Now, sisters wondered if their old-fashioned attire might actually inhibit their acceptance by the people they served in poor communities. Many religious orders, both male and female, adopted modernized habits or even stopped wearing them.

For the women, this change could be seen as a rejection of the church’s emphasis on "female submission, subordination and denial of self." In fact, the new habits — or their abandonment — created considerable controversy, which was "accurately interpreted as a new understanding of women’s place in the church and an assertion of self over bureaucracy — an expression that Catholics received with mixed reactions," Dwyer-McNulty writes.

Today, school uniforms remain supported almost universally; political conservatives embrace them as well as liberals concerned with social justice, who emphasize "No Sweat" purchasing priorities. But overall, in the 21st century, Catholic apparel seems less about creating identity and more about the "diversity in Catholic opinion on theological and social issues," Dwyer-McNulty concludes.

Common Threads is authoritatively researched at several major archival collections, including The Catholic University of America, the Philadelphia Archdiocesan Historical Research Center, the Marquette University Archives and the Sisters of St. Joseph Archive. The author’s exhaustive research distinguishes this as the definitive study on the cultural meaning of clothing in American Catholicism.

Each chapter brims with information that commands interest. For instance, we learn that in 1928, Pope Pius XI actually published clothing guidelines for young girls. He specified that "a dress cannot be called decent which is cut deeper than two fingers breadth under the pit of the throat, which does not cover the arms at least to the elbow, and scarce reaches a bit below the knee."

The pope added: "Furthermore, dresses made of transparent material are improper, as are flesh colored stockings which suggest the legs being bare."

By the 1950s, special tags even identified "Mary-like" dresses that were judged modest, in dress shops in cities such as Pittsburgh, Baltimore and Syracuse, N.Y., Dwyer-McNulty reports. Sometimes this prescribed Mary-like modest fashion was linked directly to patriotism and anti-communism, as in a 1949 Holy Name parade that she describes. In this carefully organized procession, Catholic girls displayed "religiosity, patriotism and traditional gender roles in opposition to what they perceived to be godless, de-sexing, communist values."

An accomplished interdisciplinary scholar, Dwyer-McNulty has written a compelling book that is so engagingly written that it will command interest beyond the academy.

Roberts directs the journalism program at SUNY Albany and is the author of Dorothy Day and the Catholic Worker.