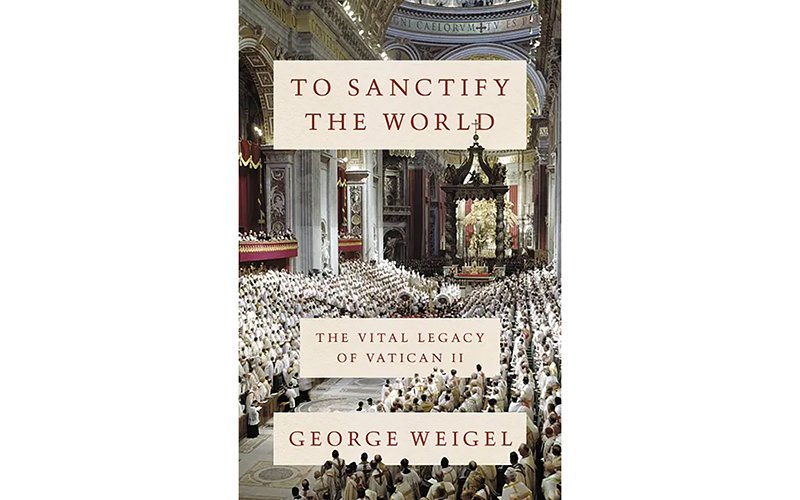 This is the cover of the book "To Sanctify the World: The Vital Legacy of Vatican II" by George Weigel. The book is reviewed by Agostino Bono. (CNS photo courtesy Basic Books)

Pope prays for unity of church on Vatican II anniversary

For contemporary Catholics born into the meaningful and groundbreaking changes brought about in Catholic Church life by the Second Vatican Council (1962-65), a primer may well be helpful to understand exactly what Vatican II said and the historical circumstances influencing its views. This is the purpose of “To Sanctify the World.”

Vatican II was the church’s signature event of the 20th century and its 16 documents remain the basis for actions 60 years later. It convened the world’s bishops and was conceived as a pastoral council to update church practices to effectively preach God’s word to a modern world. Church doctrine was pretty much left intact.

A key aim was to express the faith through positive means rather than imposing it, a condition influenced by the fact that the church was no longer the official or favored religion in many historically Catholic countries.

It also wanted to leave room for incorporating local customs and traditions into Catholic thought and practice.

Probably the most impactful changes affecting today’s Catholics involves the liturgy, allowing the use of vernacular languages to replace most of the Latin at Mass.

The council also approved ecumenical dialogue with other Christian churches in the search for unity. Dialogue with non-Christian religions was encouraged.

Regarding Judaism, it explicitly said that all the Jews of Christ’s time and those of today are not responsible for Christ’s death. This pulled the rug out from under centuries of Christianity being used as a reason for antisemitic pogroms. And it came less than 20 years after the Nazi Holocaust.

Also important was the Declaration on Religious Freedom, which says religious freedom resides in the individual and has to be respected by social organizations and civil governments.

These changes were not accepted quietly by many Catholics at the time and some unrest remains.

“To Sanctify the World” makes a concerted effort at a refresher course. It offers historical analysis leading to the secularist, anti-clerical and political authoritarianism that challenged the church and faith in general; it gives a rundown of the basic teachings in the 16 documents; and it offers guidelines for understanding the teachings.

The author, George Weigel, has written numerous books on Catholicism, including a biography of St. John Paul II. He is the Distinguished Senior Fellow and William E. Simon Chair in Catholic Studies at Washington’s Ethics and Public Policy Center.

Weigel does a good, well-researched job in providing the historical context and in describing the basic teachings of Vatican II. He stresses the Christocentric nature of the teachings and its overall aim of providing the church with the tools to sanctify the world.

Book leaves out some details

He tends to exaggerate the tension among some Catholics, especially theologians, between the texts of the documents and what is referred to as a more open, flexible “spirit of the council.”

The major fault comes when he discusses guidelines — what he calls “keys” — to understanding and implementing the documents. The fault is not so much what he says, but what he leaves out.

There is little mention of the numerous official post-conciliar documents issued on implementation and understanding. These certainly provide “keys.”

St. John Paul II and Pope Benedict XVI get separate chapters on their interpretations and elaborations. This is justified as, besides being popes in the post-conciliar era, they were both actively present at Vatican II, John Paul as a Polish bishop and Benedict as a German theological expert.

Weigel does not look into the criticism those two popes received by some who thought the popes may have been rolling back the reforms of the council.

Nor is there a separate chapter on St. Paul VI who presided over most of the council and was pope for 13 years after the council ended.

A more robust view of the post-conciliar papacy would have served readers better.

Tags: Book Review
Copyright © 2022 Catholic Courier, Inc. All rights reserved. Linking is encouraged, but republishing or redistributing, including by framing or similar means, without the publisher's prior written permission is prohibited.