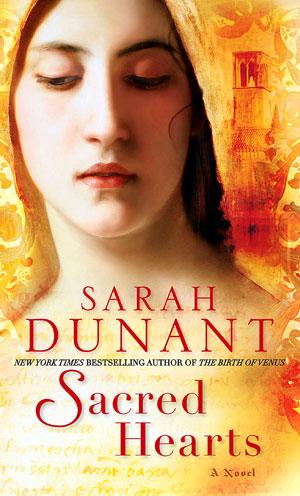 "Sacred Hearts" is the absorbing third volume in author Sarah Dunant’s series of historical novels on the lives of women in 15th- and 16th-century Italy. Having explored the lives of courtesans, artists, mistresses and mothers in earlier novels, Dunant turns in "Sacred Hearts" to a cloistered community of Benedictine nuns in 1570.

As the preface informs us, almost half of Italian noblewomen became nuns and the dowries their fathers paid to convents were a chief source of income for women’s religious communities. In turn, the community offered young women lifelong security and a chance to develop skills they might have been denied outside.

Convents practiced the same rigid class consciousness as the secular society they had left behind; women from aristocratic households were waited upon by sisters who came with small dowries. However, a certain kind of meritocracy existed as well; sisters with special skills in singing, musical composition or medicine could rise in the community.

Such is the case of the novel’s central character, Sister Zuana, who entered the community as a teenager when her father, a professor of medicine, died, leaving Zuana an orphan. Through the knowledge she learned from her father, Sister Zuana has become the convent’s dispensary mistress, making medicines for the community and special favored patrons outside. She enjoys respect from the entire community and the esteem of the abbess, Madonna Chiara.

Over the years, Sister Zuana has come to terms with the cloistered life and learned to appreciate the order and harmony it offers. But not all novices entered convents willingly and as Dunant writes, "Any convent, however well adjusted, trembles a little when it takes in one who really does not want to be there." Into Sister Zuana’s charge comes the rebellious Serafina, sent to the convent by her angry father to end a romantic entanglement with a poor music teacher. As Zuana learns, politics within the convent can become as brutal as those outside.

The reform of monasteries and convents brought on by the Counter-Reformation also threaten the peace within the walls of St. Caterina. Convents produced musical concerts and dramatic presentations for the wider community and those provided another large source of income. But some criticized them for focusing more on entertainments than the worship of God. The tension within St. Caterina and the pressure exerted from outside gives an urgency to the novel that propels the reader.

Any dedicated reader knows that when one starts doling out the number of pages so the end is postponed, he or she is in the grip of a master storyteller. Readers of "Sacred Hearts" will not be disappointed.

Yearley holds a certificate of advanced study from the Ecumenical Institute of St. Mary’s Seminary and University in Baltimore.